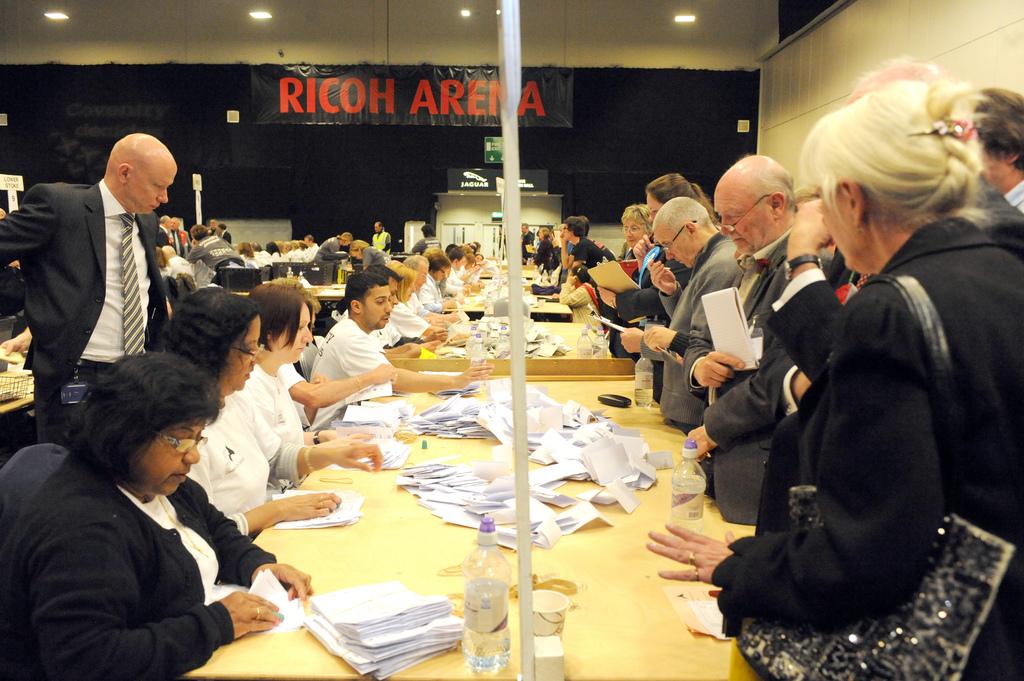 After voting closes, keen democrats across the UK will be glued to televisions and laptops waiting to hear the results of the General Election.

IT’S the closest election for a generation. Even after all the results are declared the next government will probably not be clear.

Here are 10 areas to pay attention to as the results come in.

1) Aiming for a majority in the House of Commons

Who gets to form a new government ultimately depends on who can maintain the confidence (ie. win important votes) in the House of Commons.

Without votes from the speaker and Sinn Fein (which abstains), a majority can also equal 323 MPs.

The Guardian has a useful chart of different party MP combinations. (Click here to read more)

During the day, polling agencies ask voters in key seats who they have voted for.

In 2010 this ‘exit poll’ was very close to the eventual result. The 2015 exit poll will be the first big indication of what has happened in the election.

However, even the media’s favourite opinion pollster, Professor John Curtice, has warned that in an unpredictable election the exit poll is less likely to be accurate.

He said: “Don’t be surprised if the headline is very circumspect, which basically means: ‘Who knows?’…”Until now you could ignore Scotland [in working out the close seats] You can’t ignore it any more.” (Click here to read more)

All eyes will be focused on the first results from Scotland.

If the SNP wins over 42 per cent of the national vote it is heading for a landslide.

But due to Labour’s huge lead from 2010, the SNP could still win as low as 15 seats if its vote is lower than expected.

The scale of SNP gains will play a major role in who holds has a majority after the election.

The big two parties are focused on close contests in England, where Labour is aiming to improve on its 2010 outcome.

Polls suggest that Labour will win some seats – but not enough to win a majority.

Labour needs to win at least 68 seats for a majority – and even more if it loses seats in Scotland. (Click here to see Labour’s target seats)

If the swing to Labour in these target seats is well below 9 per cent, they wont form a majority government.

As another hung parliament is a likely outcome, how many seats the Liberal Democrats win is crucial.

If the party holds onto most of its seats (over 40) then another two party coalition deal is possible. (Labour or Tories over 280 seats plus 40 equals a majority)

But with under 30 seats this would no longer be the case. This requires a swing of over 10 per cent against the Lib Dems. (Click here to see the seats)

6) The Ukip and Green party turnout

Due to ‘First Past the Post’ election voting, Ukip and the Greens are unlikely to win more than a couple of MPs each. But they will win millions of votes.

It’s difficult to tell whether this will shift the result one way or another, but it will enhance calls for a change to the voting system.

You can see the Ukip target seats (here). The Greens hope to win in Brighton.

There is a long-list of leading politicians facing potential defeat, especially in Scotland.

Nigel Farage has promised to resign as Ukip leader if he fails to win South Thanet.

8) Who is the ‘legitimate’ government?

With neither Labour or the Tories likely to win a majority and no simple coalition likely, there are already lots of claims and counter claims over who would be the ‘legitimate’ government.

The sitting prime minister would have the right to try and form a new government first.

The Tories say if they are the largest party they will claim to have won the election.

But the SNP has promised to phone Labour on Friday morning proposing to create a ‘progressive alliance’ to remove the Tories from government.

Already some in the media claim this would be illegitimate, as England will vote Tory and possibly get Labour. Nicola Sturgeon has replied that a legitimate UK government requires support in Scotland.

These arguments are likely to start as the results emerge.

9) Will there be talks between the parties?

In 2010 coalition talks took place between Labour, the Tories and the Lib Dems. This time the SNP, and other smaller parties, are also in the mix.

Nicola Sturgeon will be in London on Friday. Will the party leaders talk? Labour has claimed it will do “no deals” with the SNP, but how will this work if Labour need the SNP to gain a majority in the house of commons?

10) Perfect storm for constitutional reform or a right-wing coup?

With so much uncertainty, there are a number of claims that the weeks after the election could be incredibly unstable.

Some have even described media and Tory plans as a ‘right wing coup’ – where the Tory refuse to relinquish power to a left-wing majority in parliament.

Others say that the failure of the voting system, the unclear rules about what happens in a hung parliament and the different directions in Scotland and the rest of the UK provide a perfect opportunity for a substantial reform of how UK election operate.