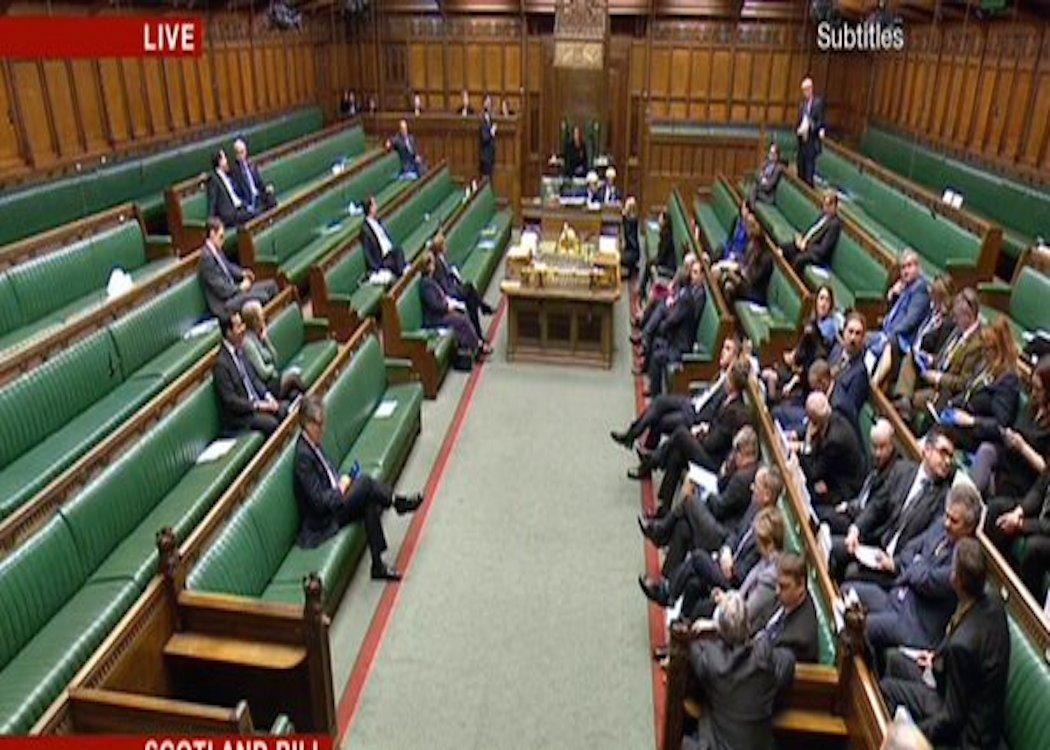 THE SCOTLAND BILL on further devolution has been passed by the UK Government, despite demands from the vast majority of Scottish MPs for far greater powers to be transferred to the Scottish Parliament.

In a wide ranging and tightly orchestrated debate, hundreds of amendments were placed from the UK Government’s only Scottish MP, David Mundell, alongside a series of alternative proposals from the SNP and Labour.

Starting in the late afternoon, voting on the Bill continued till after 11pm in what was at times a debate fraught with tension as the SNP block of MPs was repeatedly outvoted by the main unionist parties.

Here are 10 of the most significant moments of the night.

1. Minor Conservative amendments all pass – but little has changed

Before the debate Tory Secretary of State for Scotland David Mundell claimed there would be substantial changes to the bill. This failed to materialise when the majority of his 80 amendments were technical or related to issues like punctation . Three reserved further powers to Westminster.

However, slight changes to powers over social security, electoral law, carer’s benefit and the permanence of the Scottish Parliament were all included and passed.

2. Proposals for greater tax and social security powers rejected by the Conservatives

The major impact of the Scotland Bill relates to the devolution of income tax revenue and further areas of social security.

However, 70 per cent of total tax revenue and 85 per cent of social security revenue will remain at Westminster.

SNP proposals to devolve the minimum wage, employment and human rights legislation – all supported by independent organisations in Scotland – were rejected.

Even a recent Labour amendment in favour of full VAT devolution was rejected, with Mundell claiming he had to stick by the Smith Commission proposals.

3. Split over whether the Scotland Bill delivers the referendum vow

The SNP argued that the Bill failed to meet pre-referendum promises and did not respond to the General Election result.

While the Conservative and Scottish Labour now claim ‘The Vow’ and Smith Commission proposals have been delivered, there was not universal agreement among unionists.

Labour shadow minister Wayne David said the Tories hadn’t delivered on what was promised to Scotland.

“It’s not to say that the government has delivered on absolutely everything. They clearly haven’t,” he said.

The debate on the Scotland Bill was a bit of a ruckus at times.

Breaking with the party line, veteran MP Edward Leigh called for a far more radical shake up of the constitution – with the Scottish Parliament controlling all powers except for foreign affairs and the military.

He argued that Labour and the Tories had been caught out by the SNP and that “whether we like it or not, the Smith Commission was rejected by the Scottish people” in the General Election.

He predicted that a unionist party would eventually back full federalism at a future election.

A key vote – given recent political bun fights over Tory tax credit cuts – was over whether to devolve the system to the Scottish Parliament.

The SNP forced a vote, where Labour and the Tories voted together against the proposal, causing noticeable uproar on social media networks.

While Scotland will gain the power to ‘top-up’ social security payments, the tax credit system itself will remain reserved with Westminster’s Department for Work and Pensions (DWP).

7. Abortion will be devolved to the Scottish Parliament

One significant amendment to the Bill related to devolving laws surrounding abortion. Conservative minister Mundell had to defend the move from Labour MPs who expressed concern that different laws could exist in Scotland from England.

However, Mundell criticised Labour’s approach to the issue, stating that former Labour chief secretary to the treasury Yvette Cooper was “in danger of verging on the patronising”.

The Scottish Government has promised that abortion rights in Scotland will not be restricted following its devolution.

A proposal for the Scottish Parliament to decide whether a future independence referendum should take place was struck down by the unionist majority.

The SNP wants the power to hold another vote when the people of Scotland provide a fresh mandate for a new poll.

However, the power to decide on a referendum was rejected at Westminster – meaning consent for such a vote would have to be agreed with the UK Parliament.

Proposals to devolve the Crown Estate, a reserved property portfolio that also has extensive rights to Scotland’s shore and seabed, were passed in parliament.

However, the plans have been criticised for failing to devolve full control of heredity revenues.

10. Glum faces all round

The SNP benches were naturally disappointed that the UK Government ignored the vast majority of their proposals.

David Mundell’s attempt to compliment SNP MP Tommy Sheppard on his recent performances was met with a ‘not amused’ expression. An emotion shared by many who followed the full debate online. Voting concluded after 11pm.