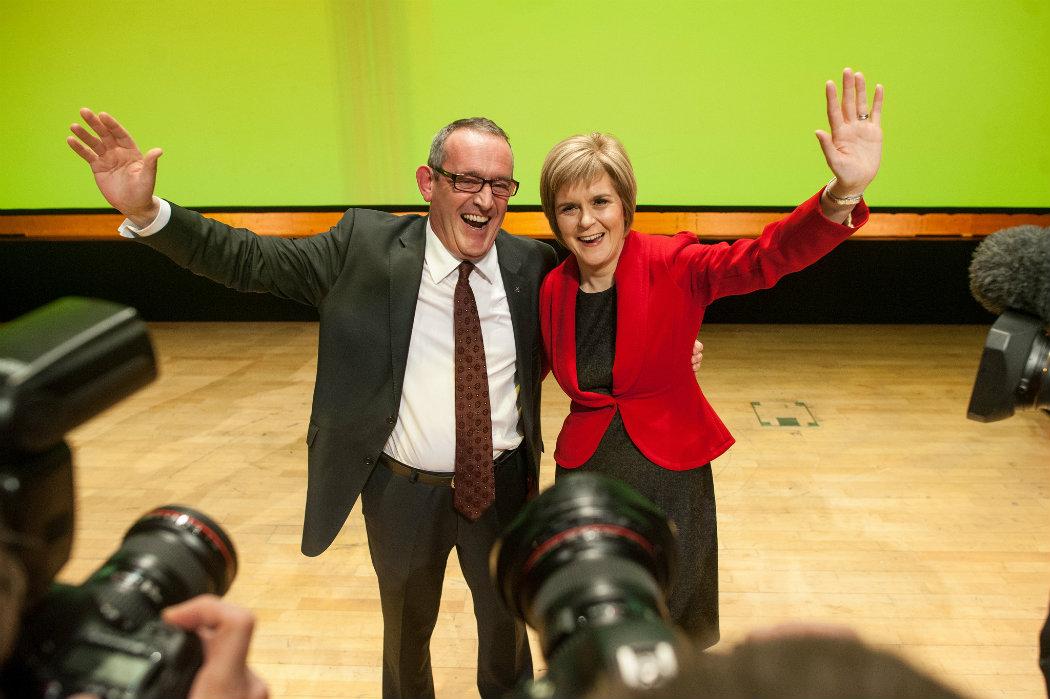 With the Tories in control of parliament, the going has been tough on the SNP opposition benches

ON THE MORNING of 8 May, First Minister Nicola Sturgeon declared that there could be no more “business as usual” at Westminster.

Scotland, in an unprecedented political transformation, has delivered a landslide to the Scottish National Party.

Meanwhile the Labour party was demolished – north and south. The Tories, despite all predictions of a hung parliament, gained an overall majority and a firm grip on power.

Yet the mandate granted to the SNP raised expectations that the political process had to change. Otherwise how could the UK continue without heeding the democratic wishes of the Scottish people?

100 days later, with the dust settling in the House of Commons and Lords, what has changed and what is yet to change?

The Tory imposition on Scotland

The SNP had hoped to hold the balance of power over a Labour minority government – but those hopes evaporated on election night. Instead the Tories – despite their worst result in Scotland since 1865 – gained a UK mandate for a right-wing manifesto .

This included: further austerity cuts (especially to social security), a continuation of NHS privatisation, a referendum on exiting the European Union, scrapping the Human Rights Act, the renewal of Trident weapons of mass destruction, further anti-trade union laws, and tax cuts for the wealthy.

The arithmetic of the new parliament presented a substantial hurdle for any opposition. With a 12-seat majority, David Cameron gained more power than he had held in coalition.

Despite early meetings with Nicola Sturgeon promising to respect the election result in Scotland, a number of disputes arose following the election.

David Mundell – the only Tory MP in Scotland – was selected to run the UK Government’s Scotland Office as secretary of state. Despite calls for the department – which was at the heart of the dodgy leaked Carmichael memo – to be disbanded, its operations continued as usual.

Andrew Dunlop, an unelected adviser to Cameron , was promptly promoted to the House of Lords and made Mundell’s deputy.

“British democracy is a joke,” said researcher and campaigner Andy Wightman. “Just appoint your pals to government and then get the Queen to make them a fucking Lord or Lady.”

SNP stuck on the opposition benches

In the month following the election unionist party supporters, like Labour councillor Alex Gallacher, teased the SNP MPs as “the feeble 56”.

When it came to debating the Scotland Bill on further devolution the Conservative government rejected every single amendment for further powers. A watered down version of the Smith Commission sailed through Westminster without the support of 58 of Scotland’s MPs.

When it came to the Welfare Bill and George Osborne’s budget, the Tories could command a majority irrespective of SNP objections. In fact, the SNP group focused much of its criticism on the failure of the Labour party to reject austerity and cuts to social security.

While the Scotland Bill debate illustrated the limitations of opposition, the SNP have found cracks in government policies.

As part of a cross party coalition, plans to repeal the Human Rights Act were shelved. The government was pressured into avoiding a voting clash between the EU referendum and the Scottish elections. English Votes for English Laws (Evel) proposals have been delayed. And ending the fox hunting ban was abandoned after SNP opposition.

Yet both the Human Rights Act and Evel plans are being repackaged, and are likely to be brought back for future votes.

Meanwhile, the main government actions – the budget, the Welfare Bill, military action in Syria and Iraq – retain a majority in parliament.

So were these concessions more symbolic victories rather than proving that the SNP 56 can wield real power?

Prior to the General Election there was criticism of new SNP standing orders which included the expectation for MPs to “accept that no member shall within or outwith the parliament publicly criticise a group decision, policy or another member of the group”.

Opponents, with hyperbole, accused the party of ” Stalinism “.

While SNP MPs have demonstrated an iron discipline on following the party line, there have been occasional examples of independent thinking on policies.

George Kerevan MP, for instance, called for a wealth tax in Scotland. Alongside Chris Stephens MP, he supported proposals for Greek debt cancellation .

Tommy Sheppard MP opposed underground coal gasification in the Firth of Forth.

Stewart McDonald MP spoke out against UK arms sales to Saudi Arabia and called for a more just approach to foreign policy.

However, so far it seems that the most new MPs are willing to stay loyal to party policy and the official line (at least in public).

The lure of the establishment

John Nicolson MP promised that the SNP group would not be “seduced” by the power and grandeur of Westminster.

Symbolically, the SNP group tried to ignore certain archaic conventions after their election – like clapping in the chamber and by sitting on the Labour front benches.

Traditionally, the SNP has also refused to take seats in the House of Lords.

Yet the challenge of playing politics at Westminster – taking up committee seats, receiving millions in expenses, considering UK-wide interests – naturally drags the party closer to the Westminster system.

Columnist James McEnaney was distraught with the SNP decision to vote on English only fox hunting legislation. It was, in his view, abandoning a long held democratic principle of maintaining neutrality of English issues.

Kenny Farquarson, at the time deputy editor of the Scotsman, had argued that the more influence the SNP wield at Westminster the more comfortable and ‘British’ the party will become.

Recently, both Cat Boyd of Left Scotland and Robin McAlpine , director of Common Weal, have raised concerns that the SNP is taking a conservative approach to its policies and a future independence referendum.

Former BBC Scotland journalist Derek Bateman, recognising a new challenge to the SNP from within the Yes Movement, observed : “a questioning tone is emerging from a wider front than the usual Unionist suspects”.

The SNP tsunami was won on the basis of opposition to austerity, a demand for greater powers in Scotland, a dedication to social justice and opposition to nuclear weapons.

Whether SNP MPs can avoid the complacency that comes with electoral success (and weak unionist opposition) to deliver on those expectations will be the defining feature of their future parliamentary careers.