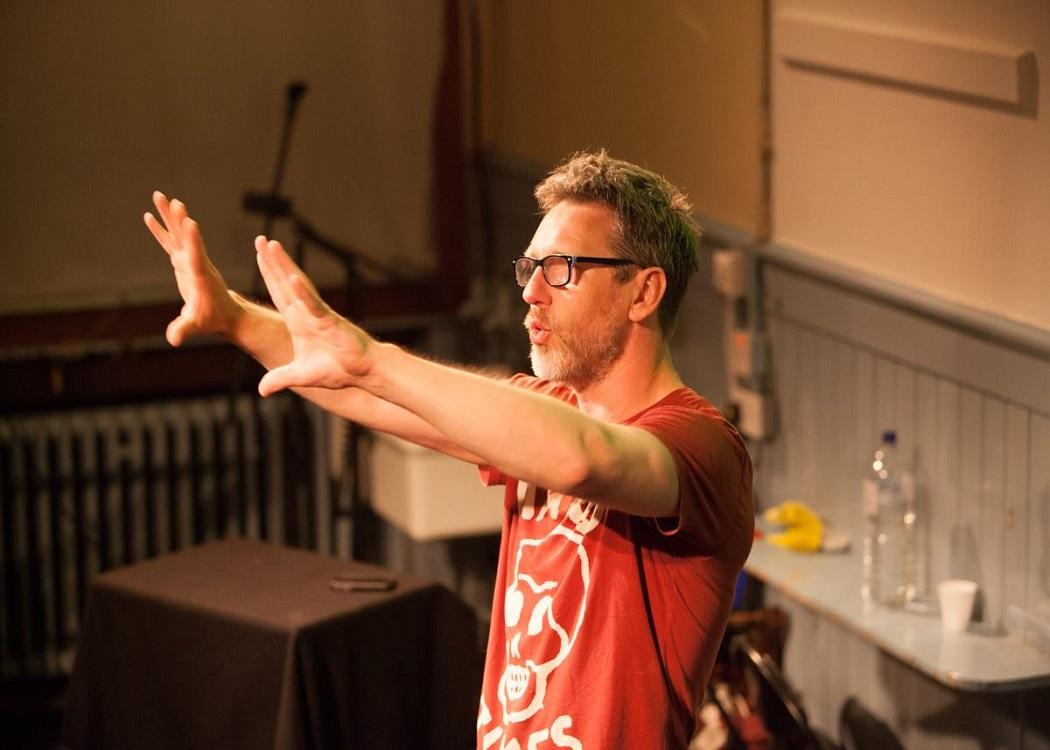 When I was a kid I used to save up all my money for musical instruments. I was in high school in the late 1980s and as well as guitars and distortion pedals and all that it was the birth of home-made electronic music and all the technology that made it possible.

My bedroom was a tangled mess of nascent drum machines and samplers connected to a couple of ZX Spectrums with me playing guitar along, all funded by shifts washing dishes in a local hotel. I veered from wanting to be a rock star to being what would now be called an electronica composer.

It took quite a while to accept that wasn’t really what I was best at (I went to university to study music and just discovered I was so much better at the social sciences). For a brief and alarming moment I chose all the Highers to get me into an electronic engineering degree.

I genuinely amn’t a fan of the concept of heroes. I remember getting into a heated argument in a pub when I was 16 about someone famous I liked and how someone else said they were a horrible person.

I just kind of realised that, unless someone is your friend, someone you know, you’re a lot better off liking what people do and not trying to ascribe to them as a human attributes that in fact you admire in their work.

People are all just a bit of a mess and some of the best and most creative or incisive or exciting people are even more of a mess than most. I met Noam Chomsky at a dinner once and he just wasn’t as riveting as I expected. It doesn’t affect how much I admire his writing. That said, I cried like a baby when I went to see Nelson Mandela in Trafalgar Square in 1996.

Just impossible to answer – I have a very eclectic taste in music and even with nothing to do but think about it I can’t narrow down a list of desert island choice in a two hour car drive. I just keep changing my mind.

But for the sake of not copping out completely, in classical I didn’t know what was possible until I first heard Stravinsky’s Rite of Spring which still shocks me every time I hear it.

The idea of life without some bebop does not appeal at all – John Coltrane, Bud Powell, Dexter Gordon or something like that. And in pop and rock, there’s probably no artist over the years who has impressed me more than PJ Harvey so possibly Rid Of Me.

Oh, and the Pixies and Nirvana and Belle And Sebastian and LCD SoundSystem and … see?

My shadow. Seriously, everything. In the real world when I actually have to face things in front of me I generally feel kind of determined. In the seconds before sleep or when a thought catches me unaware out on a walk or something, I can manufacture a sense of deep foreboding from just about anything (cough won’t go away? That’ll be me on the way out then….).

I’m persuaded by psychologists who suggest that fear is the sensible default reaction which helped us evolve by avoiding lions and tigers and bears (oh my!). Civilisation is just an ongoing battle of humans trying to learn not to be scared. (OK, I watched a lot of Walking Dead over Christmas…)

Twitter is just like having a lynch mob in your pocket. I totally recognise the wonderful potentials it opens up. But I grew up in a small town. You have to live with the same people day in, day out, whether you really like them all or not.

You just have to learn to filter and not say everything you think out loud every time you think it or you couldn’t live with people any more. Twitter, politics, Scotland – it’s all a small town. We need to filter more and shout less.

But Cristina (my partner) is Mexican and lives thousands of miles from her home city. We’re trying to bring our daughter up very aware of her Mexican heritage. Facebook is kind of essential for keeping in touch with all of our Mexican friends and family (I have family in Greece and good friends in Spain as well).

You’re referring to that unidentifiable runny brown shit they put on chips in Edinburgh? It’s wrong. It’s Amnesty International-level wrong. A fish supper is one of mankind’s great creations and requires only salt and vinegar.

Seriously, you’re going to force me to leave behind either my partner or my daughter? What are you, the DWP? For book, probably Great Expectations, the one novel that can make me both laugh and cry out loud. Food? Cheese. Just cheese. Unless you could see your way to allowing me some bread too. [No, you can’t have bread – Ed.]

There isn’t space on the internet to answer that question comprehensively. My only defence is that I’m quick to change my position when I realise I’m wrong. A case study? Initially, I didn’t think an uncoordinated, disaggregated, make-it-up-as-you-go-along Yes campaign could be a success.

Kettles. Bits of wood. Holes. Buzzing sounds. Light bulbs. Bad broadband. I have moments of bad temper which can convert any inanimate object of your choice into my mortal enemy.

I am clumsy and have a particular loathing of gravity, especially in combination with breakable items. But it always passes quickly.

In the long term, literally any kind of injustice gnaws away at me – seeing fear in a child’s eyes, seeing cruelty to animals, seeing vulnerable people being ripped off…

Unrequested acts of kindness. When I see a youngster run over to help a pensioner who’s just dropped her bag of messages, it can leave me cheered up for the whole day.

I think about this a lot. It varies but the principle is always the same – I really want to know what the great minds of history would make of the breakthroughs that came later. So I’d like to play Messian or Bartok to Mozart or Beethoven, find out what Newton would make of the General Theory of Relativity, ask Marx to reflect on neoliberalism, that sort of thing.

I can’t imagine anything I’d say would make any difference whatsoever and I’m pretty sure the whole experience would end up winding me up a lot more than it would him. I’d probably just avoid the whole situation altogether.

I’m mildly curious about the pig business though.