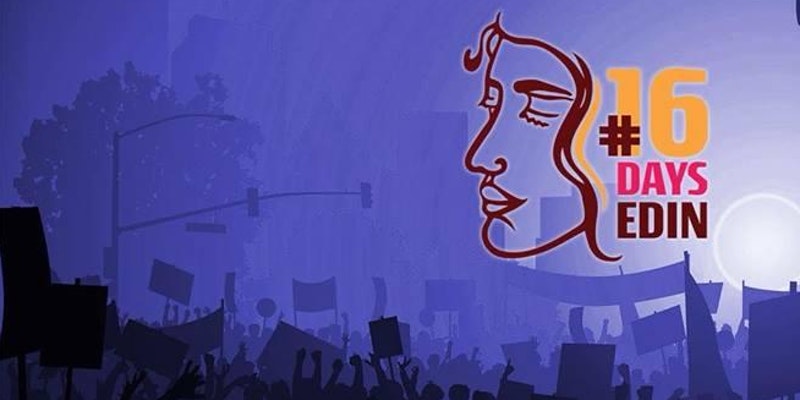 Edinburgh joins international campaign against abuse of women and girls

TO MARK THE UN’S 16 Days of Activism Against Gender-based Violence, which runs from 25 November to 10 December, an Edinburgh chapter of the campaign has organised events to take place on each of the 16 days across the city, with a closing event on 11 December.

The 16 days begins every year with International Day for the Elimination of Violence against Women and ends with Human Rights Day, and this year’s theme is “leave no one behind”, reflecting a commitment to reaching the most marginalised women and girls.

The events in Edinburgh, which include talks, workshops, exhibitions, shows, movie screenings, and more, aim to inform and raise awareness about gender-based violence around the world. Throughout the campaign period, the organisation is also raising awareness via its blog and Twitter.

Visitor count in the hundreds for our Day 2 of the #16daysedin International Bazaar! We love our entrepreneurs #16days2017 pic.twitter.com/hXz9Xu6XS3

Hannah Lawrence, website content editor and organising committee member for the Edinburgh chapter of the UN’s 16 Days explained why the campaign is so important: “More than 700 million women alive today were married as children, 200 million women and girls have undergone female genital mutilation, and two out of every three child trafficking victims are female.

“As unsettling as it is to imagine gender-based violence as an unknowable phantom with no beginning or end, cultural historian Riane Eisler has, for decades, drawn attention to something far scarier: ‘for most of recorded history […] those who had the power to prevent and/or punish this violence through religion, law, or custom, openly or tacitly approved it’.”

This, Lawrence said, is why “organisations and institutions all across Edinburgh are teaming together this year to spotlight gender-based violence through a 16-day campaign”, within the framework of the UN’s international campaign.

So far, the campaign activities have included a textiles workshop including an open discussion about gender-based violence and celebrating womanhood, and a two-day international bazaar celebrating Scotland’s multicultural entrepreneurs.

This week, a two-day conference on female genital mutilation (FGM) will be held at Central Hall in Edinburgh, with input from survivors and services, and a mental health awareness day at Edinburgh Napier University will hear from experts on women’s experiences of mental health, in light of the high prevalence of depression and anxiety among women.

“There will be something for everyone and every age group,” Lawrence said. With Jiu Jitsu Self Defence workshops, seminars and lectures on sex and violence in gendered advertising, the history of gender based violence and racism in Scotland, and the unsung stories of women of faith, and opportunities to walk around the city and engage people in dialogue about gender inequality, there are certainly a diverse range of events on offer.

As the campaign approaches its end on 8 December, Lesley Orr of the Centre for Theology and Public Issues and Women for Independence national committee, will share stories gathered through the Scottish Women’s Aid ‘Speaking Out’ project, which marks the 40 year history and achievements of the Women’s Aid movement.

On Saturday 9, there will be a screening at the Edinburgh Filmhouse of two films on the theme of gender-based violence, followed by a panel discussion.

Hopscotch, a short film produced by Amina (The Muslim Women’s Resource Centre) with support by the Edinburgh Rape Crisis Centre, is based on a poem by Edinburgh based poet Nadine Aisha Jassat, which highlights her experiences of street harassment.

Pink Saris is a documentary about the all-women group, the Gulabi Gang in Northern India, which campaigns against the abuse of women and girls and the caste system.

The closing event for the Edinburgh campaign will held in the City Chambers on 11 December, with a keynote speech by SNP MSP for  Edinburgh Northern and Leith, Ben McPherson. The event will invite MSPs to take the pledge to continue combating violence against women and girls, which a number of MSPs have been signing during the course of the campaign.

Having you with us in our collective work for positive social change is valued, and vital. #LeaveNoOneBehind pic.twitter.com/Edo3gtiRhE

“Each year, over 160 countries and 3,700 organisations take part in this campaign in some form. And together with all our partner organisations, Edinburgh intends to join the world’s active stance against gender-based violence,” Lawrence said.

The campaign has been organised by a partnership between Edinburgh Napier University, Bright Choices, St Andrews University and the Crown Office and Procurator Fiscal Services, with input from a range of other organisations.

All of the events are free to attend and registration is available online here.