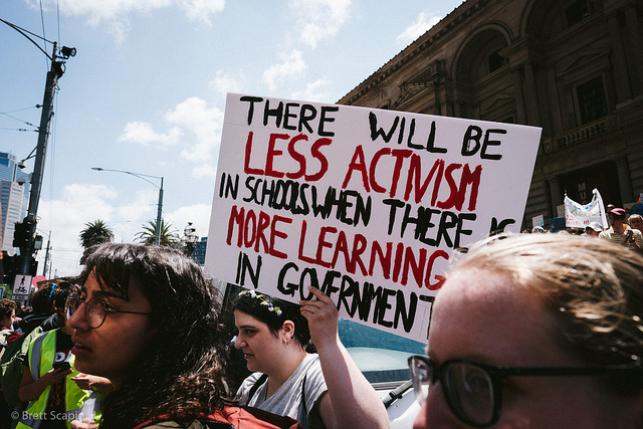 Strikes will gather outside schools, in the centre of towns and outside government buildings. In Edinburgh, children will be marching from their schools to meet outside the Scottish Parliament. In Glasgow, the strike will meet in George Square. Organisers anticipate hundreds of students to join both demonstrations.

The strike is the second global youth strike, a movement which has grown rapidly since the turn of the year, inspired by Swedish school student Greta Thunberg’s solo stike outside the Swedish Parliament, which began at the start of the school year.

The first strike on 15 February saw hundreds of school students protest in Glasgow and Edinburgh, with 15,000 estimated to take part across the UK.

This strike is expected to be bigger, with 1325 events listed on the Fridaysforfuture.org website across 98 countries across the globe.

Ahead of the strike, school student Holly Gillibrand from Fort William said: “I’m not the sort of person who would consider breaking the rules in any way. But if we don’t strike and demand that our leaders take action, we’re not going to have a habitable planet to live on in the future”.

“Article 27 of the Convention on the Rights of the Child states we have the right to health, and for the government to provide a clean environment. We respect our education and we do not want to miss opportunities. But why should we be studying for a future which is being taken away from us by our own politicians. We cannot sit back whilst politicians across the world throw away the future we are working so hard for.”

“I am scared for my future. We do not have long before climate change becomes irreversible and the Government has not been meeting any allocated targets. If we do not change the way we are consuming energy we will not live to the age we are expected to and the way we live until then will change too. We will live in a society that differs in every element to how we live now. We are uncertain of what the future will bring, the only thing we can predict is that, if we do not make drastic changes now, drastic happens cannot be stopped in the future.

First Minister Nicola Sturgeon tweeted her support for the school strikes in February, tweeting: “It’s a cause for optimism, in an often dark world, that young people are taking a stand on climate change.”

Green MSPs have said they will be joining the school strikes in Glasgow and Edinburgh on Friday.

On 5 March, Edinburgh City Council agreed that children absent in support of the Youth Strike For Climate action on Friday March 15 will not be penalised for doing so as long as they have permission of parents or carers.

The International Panel on Climate Change’s October 2018 report found that there was only 12 years left to make reductions to carbon emissions which would stop temperatures rising 1.5 degrees above pre-industrial levels, at which point the increase would cause catastrophic damage to the habitability of planet earth for humans.