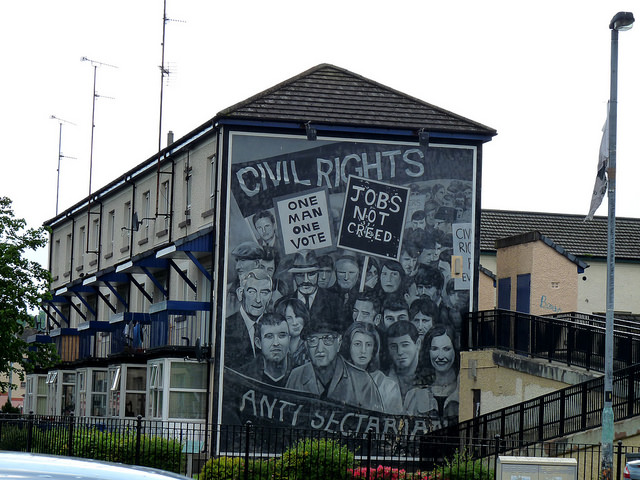 50 years after the start of the Troubles, Northern Ireland’s civil war, journalist Simon Eriksson speaks to experts on Northern Irish political history about how that era is still the contours upon which contemporary political developments, including Brexit, are shaped by

The enmeshed nature of the struggle against anti-catholic discrimination and for civil rights and the wider constitutional struggle against the United Kingdom and for a united Ireland was inbuilt into the history of the Irish republican movement in Northern Ireland from long before 1968, but perhaps began to take on the dimensions of a civil war in that year for the first time.

The first rioting began in October 1968 after a banned civil rights march in Derry led to officers from the Royal Ulster Constabulary (RUC) indiscriminately attacking the protesters, leaving 100 injured, including republican and Labour politicians. The violence was witnessed by television cameras, and brought the Troubles to the world for the first time.

The Troubles was not a religious war but took on a strong sectarian dimension, with the Ulster Unionists almost exclusively protestant and the Irish Republicans largely catholic. While there was always elements that sought to overcome this community divide, as John Dorney, editor of The Irish Story and author of several Irish history books, told CommonSpace, the importance of religious identity was deeply rooted in the history of settler-colonialism in Ireland.

“When England conquered Ireland in the 16th century it was a Protestant state, having just come through its reformation. Most of the pre-sixteenth century Irish population was Catholic, while the settlers the English brought with them were Protestants. Over the centuries, it hardened into rival identities of Protestant-British-loyalist and Catholic-Irish-nationalist. Religion has for a very long time been a marker of political and communal identities in Ireland.”

50 years on from the beginning of the Troubles, and 20 years since the Good Friday Agreement brought an end to the armed conflict and the introduction of a multi-party political system, the political and communal identities Dorney describes remain the key fault lines of Northern Irish politics.

Even though the civil war ended after the Agreement, the opposing sides of nationalist and unionist have continued to live through political parties such as republican Sinn Féin and loyalist DUP. In Belfast today, walls divide the city’s population based on cultural and religious identity.

Dorney explained: “The so called ‘peace walls’ date back to the early 1970’s, but yes, more were built even after the 1998 agreement. Yes, sadly they are necessary to prevent rioting between Catholic and Protestant communities in parts of Belfast. Protestants are generally unionists – loyal to Britain – and vote in the main for the DUP. Catholics are generally Irish nationalists and generally vote for Sinn Fein.”

Neil Jarman, Director of the Institute for Conflict Research and former adviser to the Secretary of State in Northern Ireland during the Troubles in the 1990’s, agrees: “For people living in those areas where there are walls and barriers, they definitely feel that they still need it. The uncertainty of the Executive has an impact in creating a sense of unease in certain areas that even if it may not be any violence associated with it, people still would rather be safe than sorry.”

In January 2017, Northern Ireland’s power-sharing government collapsed when Sinn Féin leader Martin McGuiness resigned as deputy First Minister, following an energy scheme scandal that allegedly had the DUP involved. Unelected senior civil servants have taken decisions for the country without ministers in office ever since Sinn Féin refused to work together with the DUP.

Earlier this year, an ambitious month-long negotiation between the opposing parties Sinn Féin and the DUP to restore a Northern Irish Government ended without an agreement. Now, after more than a year without a government and with no agreement for power-sharing, the DUP put forward a proposal for UK direct rule, meaning that the UK Government takes control of all powers currently managed from Northern Ireland. Some of these powers include agriculture, justice, education, health services and social development.

Direct rule was first introduced in Northern Ireland during the Troubles in 1972 as a way to end the violence and provide stability. It was seen as a temporary solution, but ended up lasting for 26 consecutive years. After that, the country has seen direct rule four times, most notably between 2002 until 2007.

For UK direct rule to work, a law must pass in the UK Parliament which suspends the Northern Ireland Assembly. Sinn Féin has insisted that direct rule will not happen and has instead, together with the Irish Government, proposed a “British-Irish intergovernmental conference” between British and Irish ministers to decide over issues in Northern Ireland.

Cross Border Studies director Ruth Taillon believes that taking control away from Northern Ireland may result in tension between north and south that has not been seen since the Troubles: “We basically say that, as with the Irish Government, direct rule really is not going to have the consent of half the population. People are getting very anxious to how to get government again in Northern Ireland, but really it has to be within the terms of the Good Friday Agreement. [UK direct rule] would reverse the peace process and the confidence that people do have in a power-sharing, however flawed, administration. It was the pretty stranded architecture of the [Good Friday] Agreement that gave us peace to the extent that we have.”

According to Siobhan Mullally, Director of the Centre for Criminal Justice and Human Rights, as well as Established Professor of Human Rights Law at NUI Galway, UK direct rule may very well become a reality again: “Direct rule is very possible in the instance when it is not possible to put together an executive in Northern Ireland and this has happened over extended periods of time. It is quite possible again, yes.”

The problems are compounded by Brexit, which presents a whole new set of vexed issues which cannot be extricated from the political stand-off.

Mullally added that while there are concerns, the UK Government has sworn to protect the rights and the cooperation between north and south: “The Good Friday Agreement is an international treaty, so it stands independently of Brexit and the commitments made in the Good Friday Agreement continues. The Irish and the UK Governments have continuing obligations there under the Good Friday Agreement that they have to ensure our situation and there are concerns, of course, that the impact of human rights in terms of withdrawal from the EU may be regressive, particularly given you have the EU Charter of Sentimental Rights, you have the Court of Justice as an oversight body and with withdrawal, those would no longer be accessible or applicable in Northern Ireland. That represents a possible diminution in protection of rights. That is problematic.”

A new generation of politicians who have not experienced the Troubles first hand are emerging. With the passing of former DUP leader Ian Paisley and former Sinn Féin politician and deputy First Minister Martin McGuiness, the ties of the political parties to the old paramilitary organisations during the Troubles are fading away. Earlier this year, longstanding Sinn Féin leader Gerry Adams stepped down.

Jarman is hoping that a new generation of politicians will be positive for future development: “I think it would be useful to get to the stage where we got some younger people coming through.”

Jason O’Mahony, award winning Irish political blogger and former Progressive Democrat candidate in The Republic, fears that these new politicians will make decisions without understanding the complicated history of Ireland.

“There is a danger they could be even more extremist and intransigent because lives are not at stake. They have less to lose,” he said.

On the 50th anniversary of the beginning of the Troubles, it seems that the events of the past, one way or another, are still the contours upon which the politics of the present take place upon.