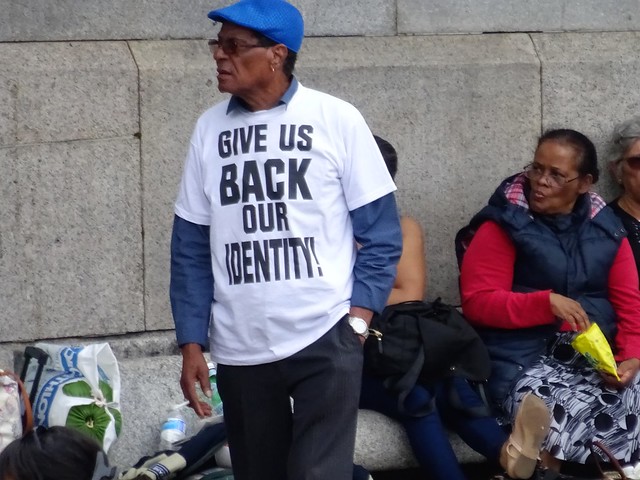 CommonSpace speaks to Nathaniel Brimmer-Beller, writer and director of Chagos 1971

2019, it turns out, was a fateful year to bring a play to the Edinburgh Fringe examining the injustice woven into the history of the Chagos Islands.

In May, the United Nations passed a resolution demanding that the UK return control of the Chagos Islands to Mauritius, with has disputed the UK’s sovereignty over the archipelago since gaining its independence in 1965. This followed an advisory opinion in February this year by the International Court of Justice at the Hague, which judged British control over the islands as illegal.

Much of the international condemnation the UK has faced over its policy towards the Chagos Islands is rooted in the forced deportation of the islands’ entire population between 1967 and 1973 to make way for a joint US-UK military base on Diego Garcia. According to some estimates, between 1,500 and 2000 Chagossians were removed. Since then, the Chagos diaspora has scattered across several countries, forbidden by law from returning to the archipelago, which they can only do so once British rule comes to an end.

Chagos 1971, now coming to the end of its run at this year’s Fringe, takes a darkly comic look at the decision-making process in 1970s Westminster which resulted in the Chagossians’ deportation. Speaking with CommonSpace, the play’s writer and director Nathaniel Brimmer-Beller explains: “This play came about as a result of a course I took back in October, on the end of the British Empire – in that course I learned about the Chagos Archipelago, and could not believe what I was hearing.

“After a night of eagerly researching this topic, I found myself completely shocked, and determined to find out just how British and American officials could have come up with such a decision. I decided to write this play as a fictionalised attempt to explain how the events of April 1971 (and indeed the entire operation) could have happened.”

Brimmer-Beller’s own shock at the story of the Chagos Islands motivated him to share his newly found awareness: “The show is meant principally as a means of calling attention to this shameful part of British and American history. That 2,000 people were removed from their homes at the whim of these colonial powers is shocking in itself, even more so when one considers it took place from 1966-1973, and even more so when one considers the means they used to achieve that end.

“It all rang so absurd to me, that I realized this message would come across much more effectively if delivered in darkly satirical comedy rather than through staid, didactic tropes of ‘serious theatre.’

“That being said, I have made sure the play is not flippant to the Chagossians’ suffering or callous with the history itself – 90-95 per cent of what is described onstage is completely true, with only a few reworkings of the actual events for the sake of the hour-long runtime. Everything else, from the dates of the governmental documents to the wording of certain orders to the unthinkably callous methods discussed and employed is lifted directly from the truth, so that audiences will get a real sense of just how unacceptable this story really is.”

The play’s focus on the British and American characters who concocted the policy of mass-deportation, rather than the Chagossians themselves, was necessary for the story to act as “a direct examination of the types of political players that would allow this sort of treatment to occur,” say Brimmer-Beller, “and of two world powers that still do not acknowledge the full extent of their tyranny to this day.

“I hope audiences feel curious to learn more about the Chagossians’ side of the story, and can look up the full details, but Chagos 1971 is meant to shine a searing light on how these countries acted in this chapter, and how unbelievable it is these events are known by so few today.”

READ MORE: UK has ‘left itself in a state of diplomatic humiliation and international isolation’ over Chagos Islands, says SNP MP

The means by which the US and the UK effected the deportation of the Chagossians – the details too often lost to history – were part of what convinced Brimmer-Beller that it was not enough for an injustice to be recognized, but for the story of that injustice to be told.

“To effectively tell the story, I decided to synthesise this message into a bottle-drama plot focusing on the real and unthinkable decision – spoilers ahead – to round up and kill over 600 dogs as a means of bullying the Chagossians off their land,” says Brimmer-Beller. “Yes, in 1971, U.S. Navy officials and British colonial agents caught and executed the islanders’ dogs by stuffing them in a container with Jeeps’ exhaust fumes running into it, and gassing them to death.

“Like I said, the removal of the people is hard enough to fathom, but this decision puts the story over the line of plausibility into extreme horror. But even this is true. And if this part of the story can be heard by audiences of today, then maybe people will fully realise how sadistically the British and American governments have acted in recent history. Once you hear that story, it is hard to ignore that the Chagossians deserve extensive reparations, and it becomes unconscionable to think so little has been done to atone for any of this.”

Asked if recent events such as the UN’s ruling influenced the production of Chagos 1971, Brimmer-Beller says: “The idea was very serendipitously placed in front of me when a classmate chose to do a presentation on the expulsion of the Chagossians, and my interest was piqued.

“People are still living in abject poverty as a direct result of being dragged off their island less than fifty years ago; not a single Chagossian is allowed to even set foot on the archipelago, to this day.” Chagos 1971 writer-director Nathaniel Brimmer-Beller

“It indeed was a happy coincidence that the story suddenly returned front and center to the headlines. I had written the bulk of the script before that happened! It was an excellent confluence of events, though, as the words ‘Chagos’ and ‘Diego Garcia’ are now on more people’s minds, though the story may still be slightly murky in their heads.

“Thankfully, we have had big, engaged audiences every day, many of whom seem drawn in specifically so they can learn more about the events – we are so happy to welcome people in and give them details they may have been missing.”

Reflecting on the ways in which art can and should deal with political issues and themes, Brimmer-Beller reflects: “I think theatre and art should address political realities wherever possible, but I also find this is done lamentably often in a predictable, self-serious manner that undermines the effect. I would much, much rather to see theatre that engages with important and difficult subject matters in a fun, risky manner than yet another safe, predictable show that gives audiences exactly what they expect from ‘issue theatre.’

“Don’t get me wrong, many serious pieces of theatre, at the Fringe and elsewhere, are brilliantly clever, but many more seem to assume that if they can just mention certain topics enough times, their messages become profound. I much prefer art that is spiky, witty, and intelligently fun. Not only does this approach make for a much more entertaining experience, it also, I find, draws in much more diverse audiences – people come for the comedy, they come for the entertainment, and they stay for the political subtext.

“I firmly believe people are much more open to engaging with political themes when a show sneaks them in under the radar, meaning one comes out reevaluating these themes in ways they did not expect going in. That is the best form of politically-engaged theatre, I believe – the fun, sharp kind.”

Despite the growing international awareness of the plight of the Chagossians, Brimmer-Beller feels that more must be done.

“This is a story that must be taught the world over,” he says. “Both as a document of historical mistreatment, and an ongoing plight of thousands that must be addressed. People are still living in abject poverty as a direct result of being dragged off their island less than 50 years ago; not a single Chagossian is allowed to even set foot on the archipelago, to this day.

“The hardest element of this situation is that there is no obvious solution. The Diego Garcia base has totally overtaken that island, and to return the Chagossians there seems unfeasible for many reasons – I would say the British Government needs to introduce an extensive package of reparations for the Chagossians in Britain and around the world. Without some form of acknowledgement and direct form of remunerative apology, the stain of this unconscionable series of events will never be wiped out of Britain’s history. We can start by engaging with this story, and spreading the word any way we can.”