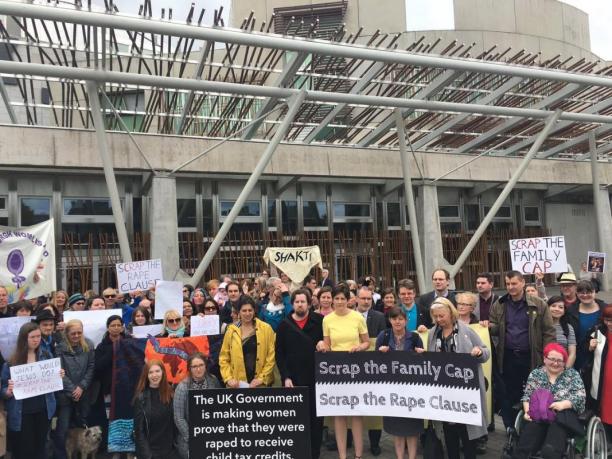 THE CONTROVERSIAL welfare policy which limits child tax credit and universal credit to the first two children in a family, enforced since April this year, will face a legal challenge driven by the Child Poverty Action Group (CPAG).

The UK-wide charity issued its claim in August for judicial review in the High Court against the Secretary of State for Work and Pensions (SSWP), and received confirmation on Tuesday that the case would go forward to a full hearing.

The policy has faced widespread criticism, not only for its introduction of a family cap, but for its attempt to provide a loophole to the rule for those whose third child was conceived as a result of rape – branded as insensitive and inappropriate by political opposition and women’s charities alike.

CPAG has said: “CPAG considers that the two child limit unlawfully discriminates against a number of different groups including, but not limited to, children with multiple siblings, large families and those with a religious or moral objection to the use of birth control.

“Further, the principal policy justification for the limit is logically flawed. In its impact assessment, DWP referred to the 2 child limit as ‘ensur[ing] that the benefits system is fair to those who pay for it, as well as those who benefit from it, ensuring those on benefits face the same financial choices around the number of children they can afford as those supporting themselves through work.’

“However, 70 per cent of those claiming tax credits are already working, severely undermining such a fairness objective.”

CPAG estimate that more than 250,000 additional children will face poverty by 2020 as a direct result of the policy, while a similar number already living in poverty will have their circumstances worsen.

As such, the charity argues that the policy contravenes the UK’s obligation under the UN Convention on the Rights of the Child to “give primary consideration to the best interests of the child”.

SNP MP Alison Thewliss, who has led on the campaign against the policy, responded to the news: “I welcome the work that the Child Poverty Action Group have done to put pressure on the UK Government, following the introduction of the two child policy earlier this year.

“The majority of the families who are entitled to support are actually in work, the very “just about managing” people who Theresa May claims she wants to help.

“Forcing women whose third child was conceived as a result of rape to relive their past trauma, simply in order to make a claim for benefit, is stigmatising and inhumane. Furthermore, the very serious implications for women in Northern Ireland continue to be dismissed by the Tories.

“From the very start, UK Government ministers have done everything they can to dodge debate on their toxic two child policy and the rape clause. I wish CPAG all the best with their judicial review; I hope it finally forces the Tories to see sense and scrap this cruel policy.”

In order to benefit from the so-called “rape clause”, claimants are required to gain third party verification from social workers or health professionals. In Northern Ireland, due to regulations in its Criminal Law Act, third party professionals have to report claims of rape to the police.