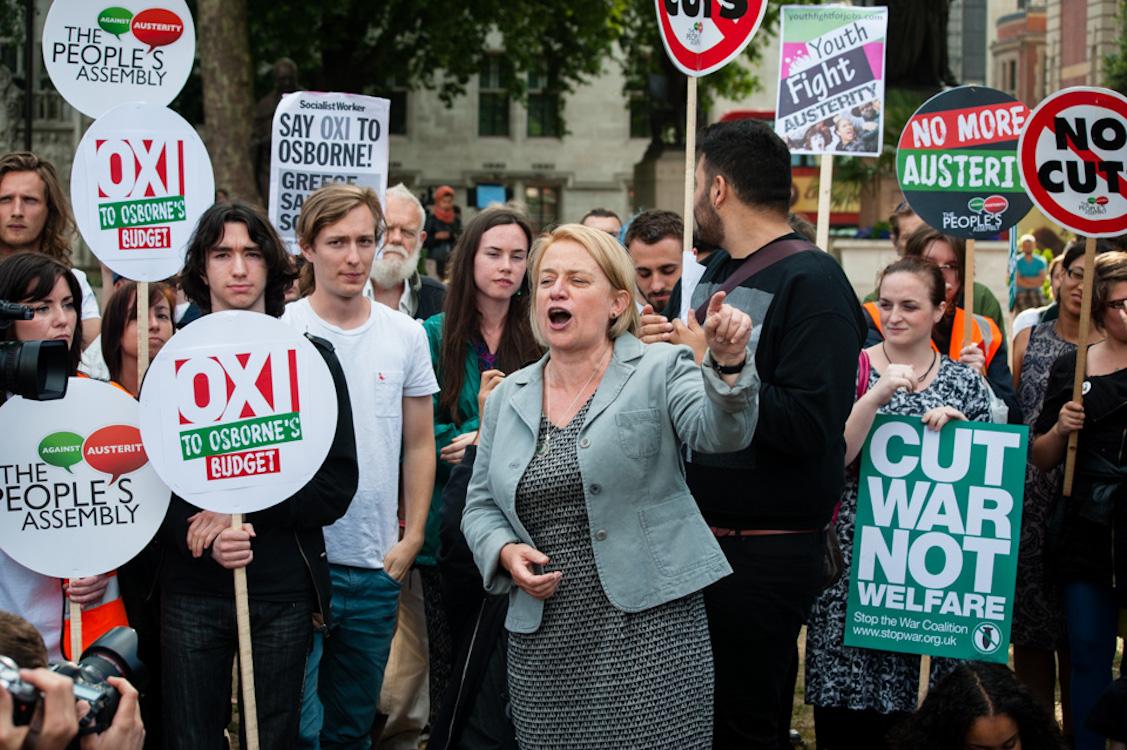 CommonSpace catches up with Green leader Natalie Bennett in Glasgow to discuss their brand of progressive politics south of the border, and her hopes for a change of government sooner rather than later.

WHILE the Scottish Greens focus on their ‘bolder Holyrood’ campaign in the run-up to 5 May, it’s worth remembering that it’s not only Scotland where votes will be cast on that date.

The make-up of both the Welsh and London assemblies will be decided then too, and in the UK’s capital the Greens have high hopes for their raft of candidates.

On a recent break from the London campaign, England & Wales party leader Natalie Bennett visited the ‘sister party’ in Scotland. The Australian-born former journalist has headed the party since 2014. CommonSpace caught up with her in Glasgow to discuss ‘progressive politics’ south of the border.

Describing a visit to Leith during the Scottish independence campaign of 2014, Bennett is almost evangelical. Having pitched in with door-knocking for the Yes campaign and found only one person disinterested in the debate, she says it was an eye-opener: “I can’t think of anywhere else in the UK that I’ve found that kind of engagement”.

‘Down south’, it seems, Greens eye their Scottish counterparts with a degree of envy. “It was an exciting prospect,” Bennet says, “that Scotland can lead, England will follow, in terms of radical politics.”

But searching for England’s radical revival might well lead you to Jeremy Corbyn’s door. Scottish campaigners said they felt a sense of deja vu watching the crowds pack in to town halls across during the leftwinger’s unlikely fight to become Labour leader last year. Why couldn’t the Greens inspire that kind of mass movement?

“You want a movement that people can bring their kids along to and have a nice party, be part of a festival of change.” Natalie Bennett

“It’s not unitary. What you need to do is draw lots of different people together, inspired by different issues,” Bennett deflects slightly. “One of the last global movements was the rise of the green movement. What I’ll call for shorthand the ‘refugees welcome movement’ is the foundation of the next big global movement.

“So people have different focus – there’s the save NHS people, some will be Green, some will be Labour. A lot will be unattached to parties. It’s a matter of getting all those people engaged, it’s a broad movement across different political interests.”

Bennett maintains that “green philosophy” is what will replace neoliberalism. Where does this sit on the ideological spectrum: Socialist? Social democratic? Liberal? “I don’t care what you call it. There’s two criteria: one which the word ‘socialist’ doesn’t include which is that we all have to live within the environmental limits of this planet. And everybody must have access to resources.

“So that’s the people and planet. And yes, the people side of it includes lots of things that you might traditionally call socialist. But as we see with Corbyn’s Labour party, the basic understanding that we can’t keep pursuing GDP growth just isn’t in that political philosophy.”

Though rejecting traditionally leftwing labels, Bennett rejects that her party’s philosophy is the middle-ground of ‘neither left nor right’. It’s “strongly redistributive”, she says. “We have to cut back in terms of resource use by two thirds. But we’re not going to say to people who are skipping meals, shivering in their homes ‘you have to cut back’ – it’s the rich who have to use a lot less.”

“2020 is too far away. We can’t allow the Tories to continue with the kind of damage to our public services for another four years.” Natalie Bennett

So the Green party hasn’t had the ‘battle for its soul’ which Labour is supposedly undergoing? “I don’t think the rightwing Green-ism is in the party at all. I’m thinking of Zac Goldsmith or Tories worried about their local owls. I mean, you can work with them to save the forest – fine – but they just don’t get the fact that our economic system is broken. Environmental and economic justice are indivisible.”

“When people are asked in surveys whether people think their children and grandchildren will have a better life than them, increasingly they’re negative. People think the system’s broken, even if they haven’t necessarily thought through what comes next.”

Can a party focus so much on inequality without mentioning class? “It’s so complicated now,” Bennett says. “What class is someone with a 2:1 and a masters degree, and a 12-hour contract in a coffee shop? They might in future get a professional job that relates to their qualifications and experience, but they might not. So I’d rather use the general terminology in the street that talks about how so many people are struggling to put food on the table and those people come from a wide range of backgrounds.”

Bennett references the so-called ‘precariat’; the younger generation stuck with insecure labour conditions and mounting inequality. But what about those for whom class identity is not so fluid, or haven’t given up on a working class identity?

“I’d rather talk about the practical realities of people’s lives rather than words that people may or may not relate to. I’m aiming for a mass audience so I use words everybody in the street would use,” Bennet says.

“I don’t think the rightwing Green-ism is in the party at all.” Natalie Bennett

“The situation with the NHS in England is a good example. You have junior doctors who by most standards are regarded as middle class. But the government is trying to impose contracts on them – and that’s the same kind of class as people forced to take a zero-hour contract.

“They’re working very closely with the student nurses fighting the abolition of bursaries, and they tend to be more mature students, coming from poorer backgrounds. Now they’re working together and I don’t want to split them apart – so it’s important you use rhetoric that includes as many people as possible.”

The idea of a new, broad movement in which the Greens have a key role is something Bennett keeps coming back to. Many theories abound as to why the protest movements of 2010 fell apart, but Bennett thinks it was the confrontational attitude of the protests.

“It wasn’t sensible to keep butting heads like that, given the resistance from the state. Fewer and fewer people would have been prepared to face that. You want a movement that people can bring their kids along to and have a nice party, be part of a festival of change.

“There’s now a rising tide of resistance, in which ordinary people are thinking there’s something rotten and broken – we’re at the point where we have a democratic force powerful enough to overcome the power of that money.”

“People think the system’s broken, even if they haven’t necessarily thought through what comes next.” Natalie Bennett

Bennett is hopeful for the radical movement in England. But would the ‘festival of change’ she envisions be a force that can confront the current government?

“2020 is too far away. We can’t allow the Tories to continue with the kind of damage to our public services for another four years. They don’t have a stable majority,” Bennet says confidently. “Something as minor as the Sunday Trading Bill and they couldn’t get it through; the Lords has been blocking them again and again. It’s a really fluid, unstable situation.”

“Think about how much change happened last year – the Green surge, SNP in Scotland, Corbyn. Then Sanders in the States. I would expect to see the same level of fluidity and change this year as last year.”

A few hours after we spoke, as Bennett followed the campaign trail to Manchester, a beleaguered David Cameron finally admitted he had previously had a stake in his late father’s offshore fund, following days of brusque Downing Street denials and mounting speculation after the Panama Papers revelations .

But while Icelanders have ousted their prime minister for his offshore tax haven involvement, it seems the UK’s ‘rising tide’ hasn’t got the power Bennett hopes for, yet.