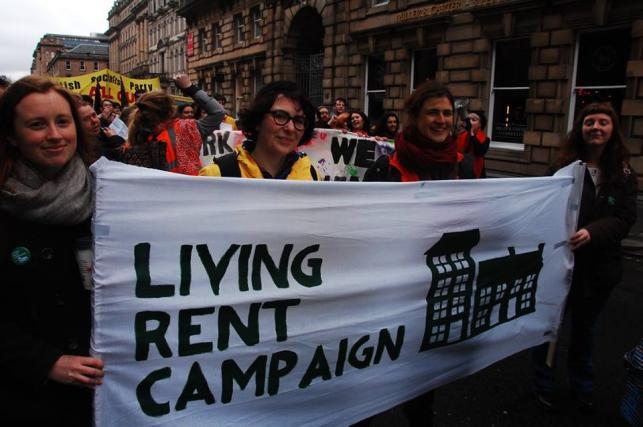 75 PER CENT of Scots support the introduction of European-style limits on how much private landlords can charge in rent, new polling has revealed.

The poll, carried out by Survation and commissioned by the Living Rent tenants’ union and the campaign organisation 38 Degrees, found that support for rent controls was even higher – 85 per cent – among those who identified as SNP voters.

The poll also indicated that rent controls are supported by all demographics, across every age group and region, and amongst all political parties.

Campaigners for rent control have responded to the poll by calling on the Scottish Government to commit to rent controls to tackle “sky-high” rent increases and “slum-like” conditions, arguing that “if politicians turn a blind-eye to the housing crisis, voters will not forgive them.”

The poll, released today, also shows that almost half of voters would be more likely to support a candidate for election who backed limits on rental prices, compared to a mere 11 per cent who said they would be less likely to do so.

“With rents rising at an extortionate rate and families being forced to choose between paying the rent or paying for food, it’s no surprise that thousands of people from all across Scotland are demanding that the government implements proper rent controls.” 38 Degrees representative Safiah Fardin

At present, Rent Pressure Zones (RPZs) can be used by a local authority to deal with existing rents that are rising significantly in a hotspot area, and are showing higher than average increases. However, they are merely a discretionary tool that can be used by local authorities, with Scottish ministers’ approval, to protect existing tenants with a private residential tenancy against excessive rent increases.

The Scottish Government have committed to supporting a working group that has been established by the Association of Local Authority Chief Housing Officers (ALACHO), which aims to develop an RPZ framework  that all local authorities will be able to use, should they wish to submit an RPZ application.

However, Living Rent, in a report published jointly with the Common Weal think tank last month, argued that RPZ powers have failed to protect tenants, and that the government must now commit to “proper, nationwide rent controls.” Since launching the report, almost 17,000 people have signed a petition backing the demand on the 38 Degrees website.

Living Rent activist Gordon Maloney commented: “These figures should be a wake up call to the Scottish Government. Rent controls are enormously popular, and it is no surprise – far too many tenants across the country are being forced into poverty by sky-high rents.

“Now we need urgent action. if politicians turn a blind-eye to the housing crisis, voters will not forgive them.”

38 Degrees representative Safiah Fardin added: “With rents rising at an extortionate rate and families being forced to choose between paying the rent or paying for food, it’s no surprise that thousands of people from all across Scotland are demanding that the government implements proper rent controls.

“Now that so many people are speaking out, the Scottish Government needs to listen and fix our broken housing system.”

Responding to the poll, housing Minister Kevin Stewart defended both the RPZ policy and recent reforms to rules regarding private residential tenancies, telling CommonSpace: “The new private residential tenancy – introduced in December 2017 – provides a range of measures to help tackle high rents, including limiting rent increases to once in 12 months, with three months’ notice required, enabling tenants to challenge unfair rent increases and providing local authorities with new discretionary powers to designate an area as being a Rent Pressure Zone.”

Stewart continued: “This year, new regulations will make changes to the repairing standard that will improve the condition of private rented properties.”

The latest data from the ONS shows a 0.7 per cent increase in rents to January 2019 across all private tenancies in Scotland. However, this was lower than the annual increases seen in England (1.1 per cent) and Wales (0.9 per cent).