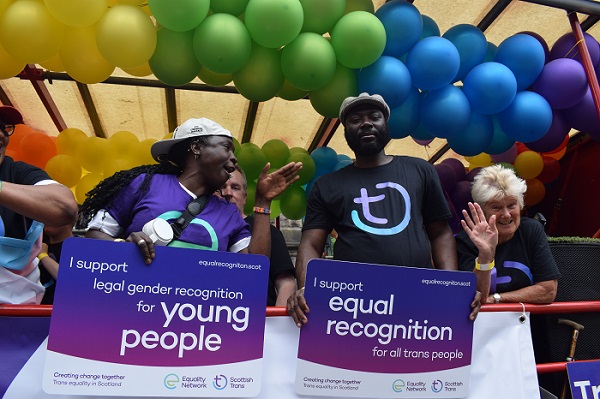 A REPORT PUBLISHED by Equality Network has revealed that a majority of all LGBTI survey respondents have experienced hate crime at some point in their lives.

The survey of 1445 people found that almost half of those who had faced hate crime had been targeted at least five times while just 10 per cent had only been victimised once – suggesting that there are those for whom prejudice-based abuse and harassment is a frequent experience.

Exactly half said the last incident had taken place within the past 12 months, and 20 per cent said it was within the last three years.

Hannah Pearson, policy coordinator for Equality Network said: “Hate crime is a serious concern for many LGBTI people. We were shocked to find how many people have experienced repeated hate crime.

“I have been verbally, physically and sexually assaulted for being transgender. Silent harassment is also an issue which has a huge impact.” Survey respondent

“These crimes are unacceptable in 21st century Scotland. Although the report makes for difficult reading, we hope that people will find it informative and useful, and together, we can work in tackling all forms of hate crime.”

The findings show that trans people, and the relatively small number of intersex respondents, are at higher risk of hate crime than their peers.

80 per cent of trans people and 78 per cent of intersex people said they had experienced hate crime, while 65 per cent, 66 per cent and 53 per cent of lesbian, gay and bisexual people respectively had been targeted.

One respondent, a trans man, described their experiences: “Being called a tranny, freak, having lit cigarette ends thrown at me. I have been verbally, physically and sexually assaulted for being transgender. Silent harassment is also an issue which has a huge impact, whispering, pointing, etc.”

“Our house was broken into and trashed. ‘We are watching you’ and ‘We know what you are’ were scrawled on the walls.” Survey respondent

An older lesbian woman reported: “Our house was broken into and trashed. ‘We are watching you’ and ‘We know what you are’ were scrawled on the walls. ‘Faggot’ was sprayed on our mailbox (stupid vandals, since we are women).”

While respondents confirmed that most of these hate crimes related to their sexual orientation or gender identity, others reported being targeted based on their race, religion or disability.

One respondent said: “I’ve had anti-Catholic graffiti spray painted on the walls of my house in Glasgow. I also have a very Catholic name and have had people react to my name with verbal anti-Catholic slurs.”

Another reported: “I was verbally abused by a stranger on the bus because my son is mixed race.”

71 per cent of people who had experienced a hate crime said they had never reported this to the police.

71 per cent of people who had experienced a hate crime said they had never reported this to the police, with respondents commonly explaining that this was because they either felt it wasn’t “serious enough” or that nothing would be done about it.

Equality Network present a number of recommendations in the report, including better responses to hate crime in the criminal justice system, continued awareness raising and encouragement of third party reporting, improved monitoring and sharing of information, preventative efforts including through the education system, and a Scottish Government review of the prevalence and nature of online abuse.

The report was launched to coincide with National Hate Crime Awareness Week, which runs from 14-21 October.