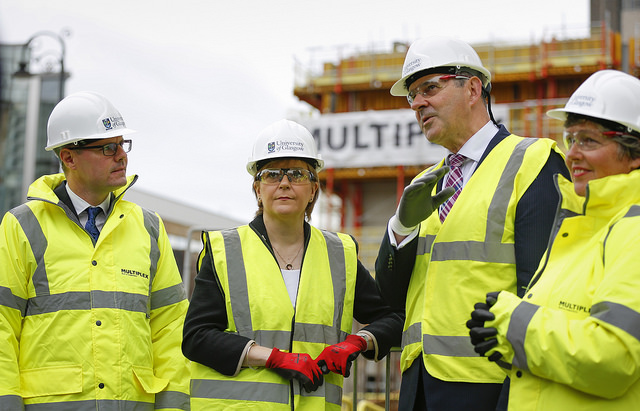 The Scottish Government will outline it’s spending plans for 2019/20 on 12 December – what options does it have, and what constraints is it working under? CommonSpace takes a look.

THE Fraser of Allander Institute’s new report on Scottish public finances provides an in-depth analysis of the situation Finance Minister Derek Mackay faces in his Scottish budget on 12 December.

CommonSpace has broken down four key findings of the report, and what it tells us about the likely opportunities and constraints the Scottish Government face in the budget.

Funding from UK Government higher, but austerity not over

The UK Government block grant funding to the Scottish Parliament, which makes up the majority of Holyrood’s budget, is set to rise by 0.6 per cent after the Chancellor’s recent UK Budget, which saw plans for spending increase. What this means is that funding is now expected to be slightly higher than it was in 2016-17. Mackay is going to have nearly £1 billion more to play with than previous Treasury projections had anticipated, a significant boost, but still a relatively small change to the overall situation for Scotland’s public finances (less than 1 per cent shift). 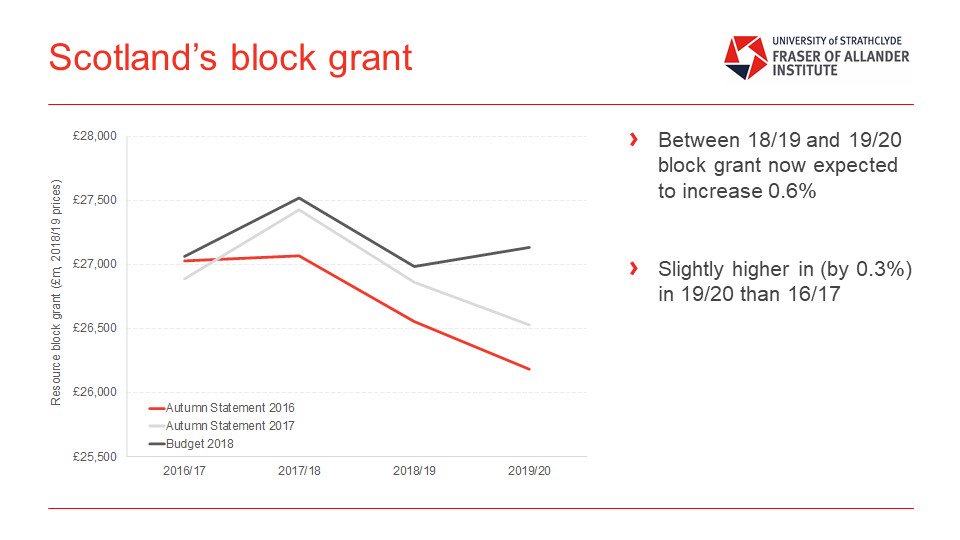 The Scottish Government has been repeating that their funding still remains below that of 2010, when the Tories first came to power, and FoA’s analysis backs that up, as the graph below shows. With a funding shortfall on 2010-11 of 5.5 per cent in real tearms, the claim by Theresa May that austerity is over is not credible in Scotland. 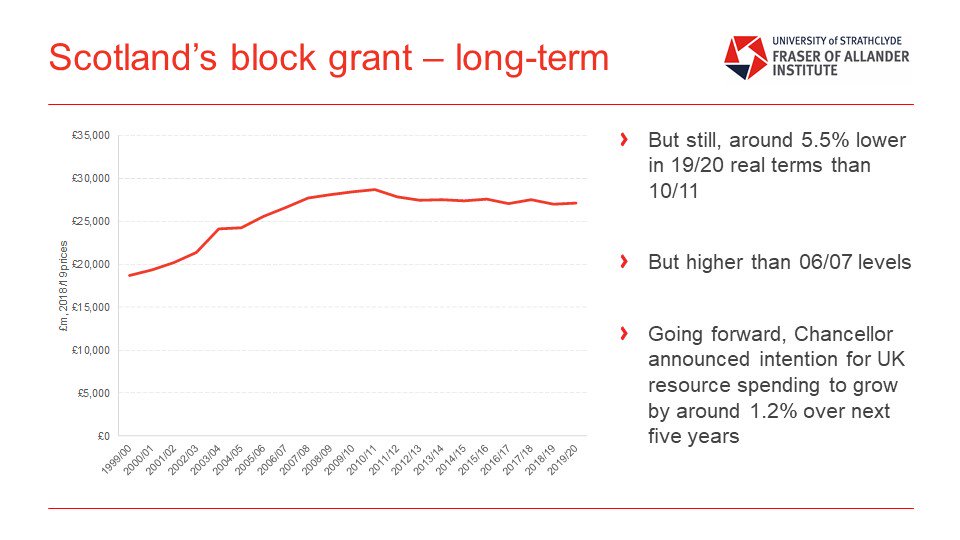 FoA has described the Scottish Government and local authorities priorities over the past nine years to a tighter fiscal settlement as one of “rentrenchment”, with education and social care prioritised at local government level at the expense of other services and health care the big funding priority at national level. 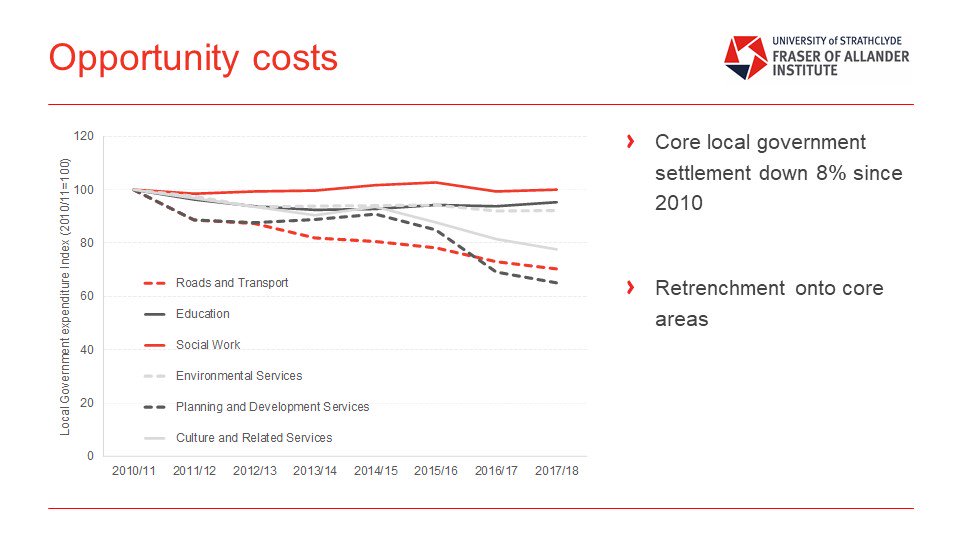 The result of increased spending on healthcare in particular is that non-priority areas are set to see cuts of 4 per cent in real terms, that’s less than the 12 per cent that had been anticipated before the easing of austerity at UK-level.

Health spending will have increased by 2.5 per cent by the end of this parliament, but this increased spending still does not keep up with rising demand as we have an increasingly ageing population. 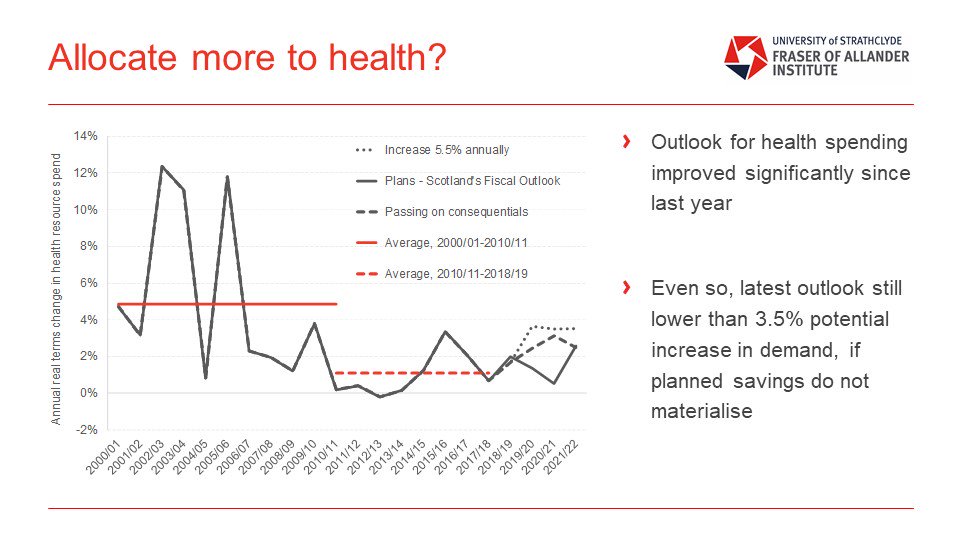 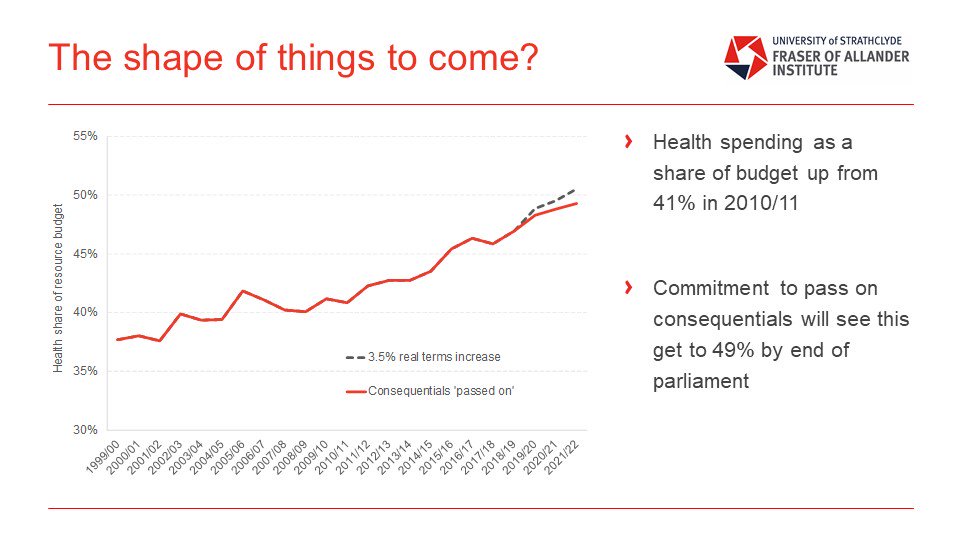 Is the increasing dominance of health spending a sustainable approach to public spending? Everyone agrees that a preventative strategy is needed – where focus is put on making sure people are healthier rather than treating them when they become ill – but that consensus does not stop headlines about long waiting times and be shortages dominating the headlines. Audit Scotland published a report at the end of October which argued short-termism in NHS spending had to end, but politically it is easier said than done.

One option of course is to try to raise more tax revenue through changing tax rates and changing what taxes are collected on. The Scottish Government did this last year by creating two new bands which reduced the tax burden for the bottom 70 per cent of income earners and raised it for the top 30 per cent. 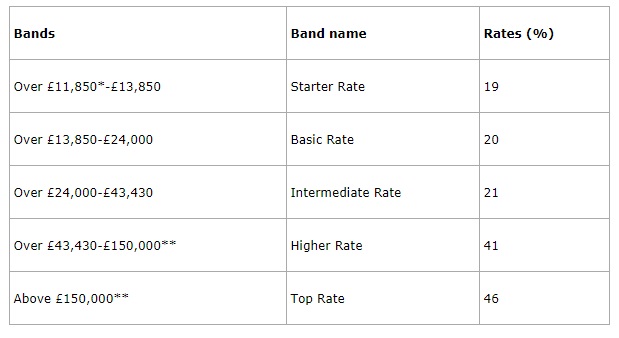 This policy did raise an additional £164 million, but Mackay could raise a lot more if he was willing to go beyond tweaks (no band went up or down more than one per cent) and instead try to lever bigger sums from the top half of income earners in Scotland (median income is around £23,000).

Such a policy is not helped by the haphazard way income tax powers were devolved, where the Scottish Government can set the rate paid on wages but not dividends. For higher earners, an incentive can open up to have an increasing share of their income in dividends, and FoA estimate that this could save some high earners up to 5000, and cost the Scottish Government money. 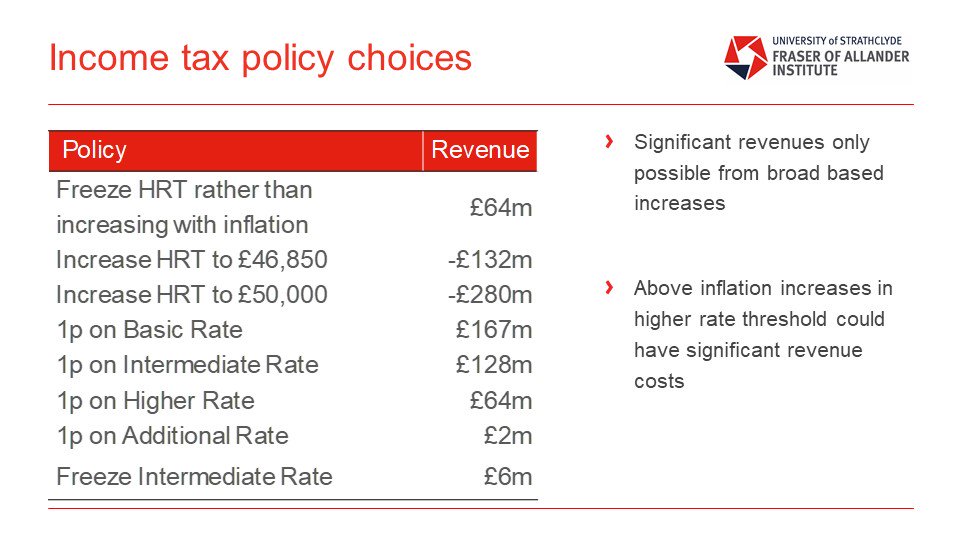 Then there is the vexed issue of local tax reform, something which the Scottish Greens say is necessary for them to support this year’s budget.

The tweaking of the Council tax by the Scottish Government went almost entirely against the recommendations of its own Commission on Local Tax Reform, which made a clear call that the Council Tax as we know it should end. The SNP had previously said they wanted to get rid of the Council Tax when they froze it year after year, but never used their majority government to do so.

The Council Tax was introduced by the Tories in 1991 to replace the hated Poll Tax, and was seen as regressive at a time when housing inequality was significantly less severe than it is today. Valuations for council tax bands remain 25 years out-of-date, while the number of people struggling with Council Tax debt has reached new peaks.

The Scottish Government is consulting on a tourist tax, but this would only be an effective source of revenue in the Highlands and Edinburgh. Even a Vacant Land Tax would raise only about £250 million. To create a tax that could increase revenue significantly across all local authorities would require a broadly based land/property tax levied on the actual market value of land/property to replace the Council Tax.

Inevitably some sort of land value tax will see losers as well as winners due to the enormous wealth inequality in Scotland premised primarily on land ownership, but the Finance Minister will need to be brave if he wants to seriously improve the revenue side of his balance sheet. 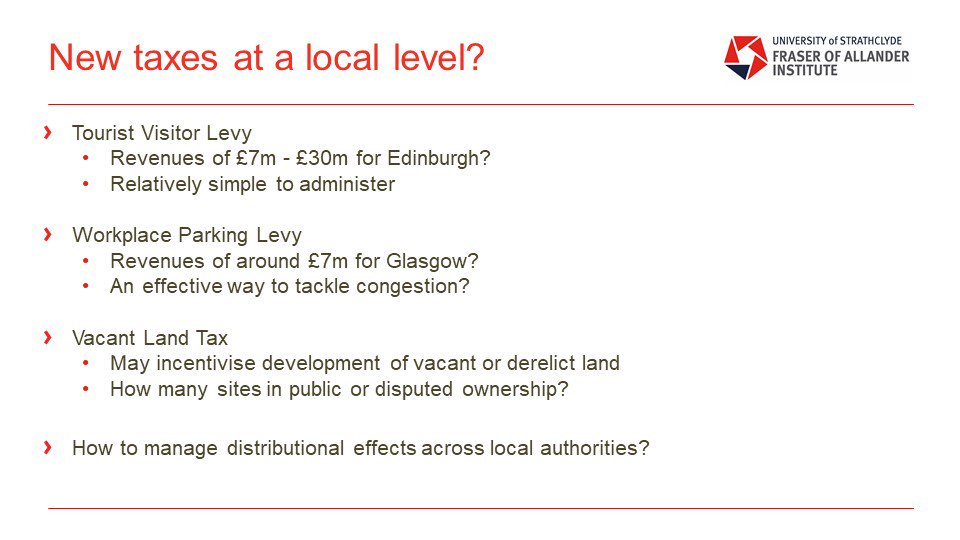 A problem with income Tax outcomes

One of the problems the Finance Minister faces is the Scottish Rate of Income Tax is not bringing in as much revenue as had been anticipated. FoA put this down to two main factors. The first is lower growth in earnings than the rest of UK, and slower than expected.

“Slower growth in the drivers of the tax base in Scotland could offset the revenue effects of the income tax policy decisions of the Scottish Government to some extent,” the report states.

That gap seems to be driven by lower productivity in recent years than rUK, reducing per capita growth. 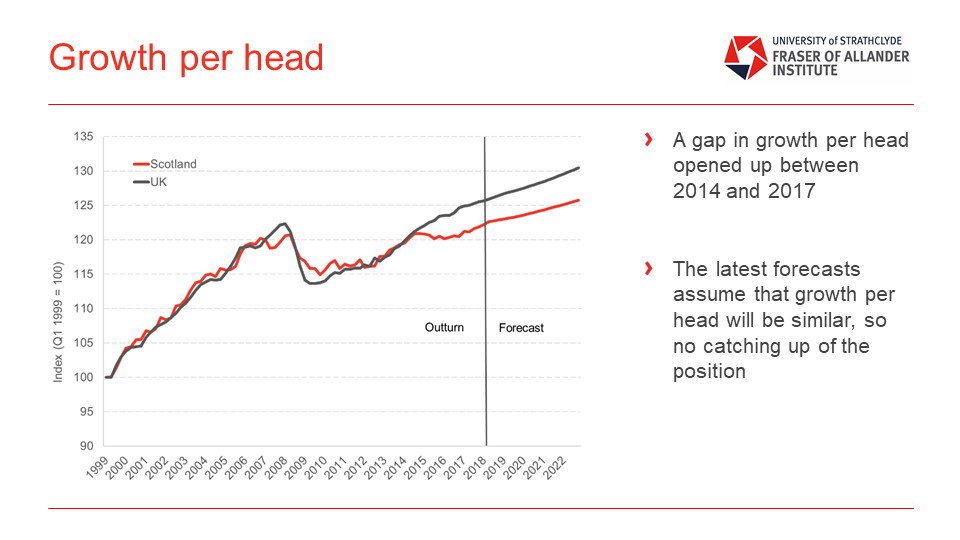 To add to this, the survey data in which income tax revenue was estimated on seems to have been too optimistic to the tune of 550 million, compared to the actual outturn data from when income tax was devolved and operational in Scotland.

The concluson from this is that either Mackay has to find a way to fix that productivity gap (and remember the UK has an enormous productivity gap itself with the EU average), he has to find a way to raise more money, or his budget from directly collected taxes is going to be smaller than he thought, increasing the Scottish Government’s reliance on the Chancellor to deliver a decent block grant settlement every year.

All in all. FoA’s report shows us that big challenges continue to build up that will have to be addressed at some point, but that the Chancellor’s Budget settlement means the Scottish Government has a bit of wriggle room in next month’s Scottish budget.