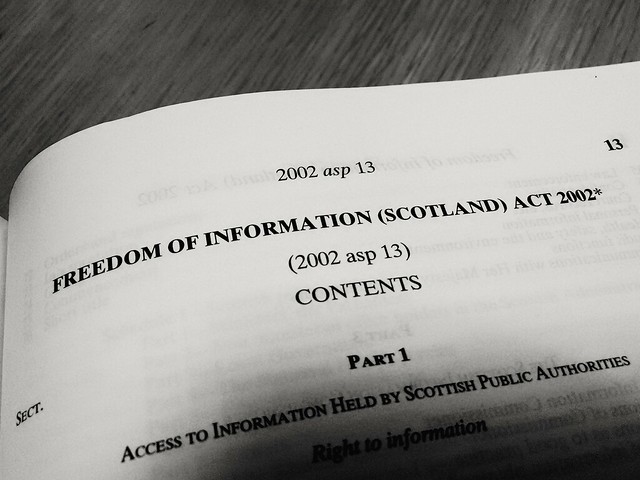 FORTY Scottish journalists have called on the Scottish Government to “refresh” Freedom of Information laws, citing a number of problems journalists are still experiencing despite improvements since an open letter two years ago expressed concern about how FoI requests from the media were being handled.

The new open letter was submitted to the Scottish Parliament’s public audit and post legislative scrutiny committee, which is taking evidence for a review of the 2002 FoI Scotland Act (FoISA).

Signatories to the open letter, which has been published in full by the investigative Journalism Platform The Ferret and CommonSpace, include David Clegg, political editor of the Daily Record, Andrew Learmonth, reporter at The National, and Craig Williams, chair of the NUJ Scotland executive council. CommonSpace journalists have also signed.

The original open letter spurred a year-long investigation by the Information Commissioner, Daren Fitzhenry, who published a damning report in June 2018 describing the Scottish Government’s handling of FoI requests, especially from journalists, as “inherently wrong”, and ordering Ministers to overhaul their FoI procedures. The Scottish Government said it would act on all of Fitzhenry’s recommendations.

The latest open letter states that “in some key respects” the Scottish Government’s “processes have improved in line with those commitments”, but that there remains “a number of reasons to review the legislation”.

“We still experience problems with the Scottish Government and have had repeated difficulties accessing information from other public bodies, including the NHS, local authorities, Police Scotland and universities. We believe there are strong, substantive reasons to consider updating, strengthening and expanding FoISA,” the letter states.

The letter goes on to cite a number of recent problems journalists have encountered, including use of royal family special privileges to prevent access to and correspondence from the royal household and insufficient staff to handle requests “leading to delays which breach statutory guidelines”.

A series of proposals are made for “expanding and strengthening” FoI legislation, including strengthening sanctions when government and public bodies are not compliant.

Severin Carrell, Scotland Editor of The Guardian and one of the letter’s co-ordinators, said it was essential that FoI legislation was “brought up to date”.

He said: “Many of us are delighted the committee has agreed to launch this inquiry, and applaud the fact that Scottish Government ministers have acknowledged the system and the application of the legislation needs to be improved.

“Freedom of information regulation has made and can make a substantial difference in our capacity to report on how the government and public services work, but the Scottish legislation is nearly 20 years old. So we think it’s essential it is brought up to date to take account of digital technology and our experiences of it in practice, as well as the increasing role of the private sector and changing styles of government. This view is shared across the media.

“We hear from ministers and public sector managers that they agree transparency is fundamental to good and open government. Often we have an excellent experience with FoI requests, yet we frequently come across obstruction, poor practice and clear efforts to restrict access to information – experiences which undermine our confidence in the system. So for all those reasons we think the committee inquiry is necessary and timely.”

James McEnaney, FoI campaigner and freelance journalist, who was also involved in co-ordinating the letter, said: “The committee’s willingness to review FOI in Scotland is welcome and I was happy to contribute my own experiences of using the law.

“Although our initial letter seems to have served as a catalyst for some improvements, there are still massive problems with FOI legislation and compliance in this country, and the law really should be updated and strengthened to ensure that it properly secures the public’s ‘right to know’.”

The Campaign for Freedom of Information in Scotland’s convener, Carole Ewart, said she welcomed the submission.

She said: “Journalists, civil society organisations, members of the public and elected politicians share many of the same concerns about how FoISA needs to be reformed and what steps require to be taken to make sure that access to information rights work for everyone, equally, as well as change culture and practice within designated organisations so that scrutiny is understood to be fundamental to a healthy democracy.”

Ewart added that CFoIS were “concerned that the first stage of the post legislative scrutiny is taking so long to conclude”.

“Realistically we had expected the whole process to be concluded by now and the legislation made stronger and relevant as to how the public sector operates and funds external services,” she stated.

“Although our initial letter seems to have served as a catalyst for some improvements, there are still massive problems with FOI legislation and compliance in this country, and the law really should be updated and strengthened to ensure that it properly secures the public’s ‘right to know’.” James McEnaney

A Scottish Government spokesperson responded to the open letter by stating: “It’s important to note that Scotland already has the most open, far-reaching freedom of information laws in the UK – and we are working to widen the coverage even further. Last year 91 per cent of Scottish Government FOI responses issued on time with the number of requests increasing by nearly 12 per cent.

“The Scottish Information Commissioner (SIC) said there was ‘no doubt’ that significant improvements had been made in the Scottish Government’s FOI performance and found no evidence of improper motives in the application of exemptions or special advisers holding any decision-making power in the process. The SIC described the new criteria for our decision making process agreed with him as providing ‘a sound foundation for future work’.

Commenting on the audit committee’s inquiry into FoI legislation, committee convenor Jenny Marra MSP said: “The Committee is keen to hear from members of the public about their experience of Freedom of Information laws.

“Whether you have asked for information from your local council, health board or college, everyone’s experience of asking for information will help parliament review the law and change it for the better.”

The deadline for submissions to the committee’s call for evidence has been extended to 21 June. Submissions can be made here.