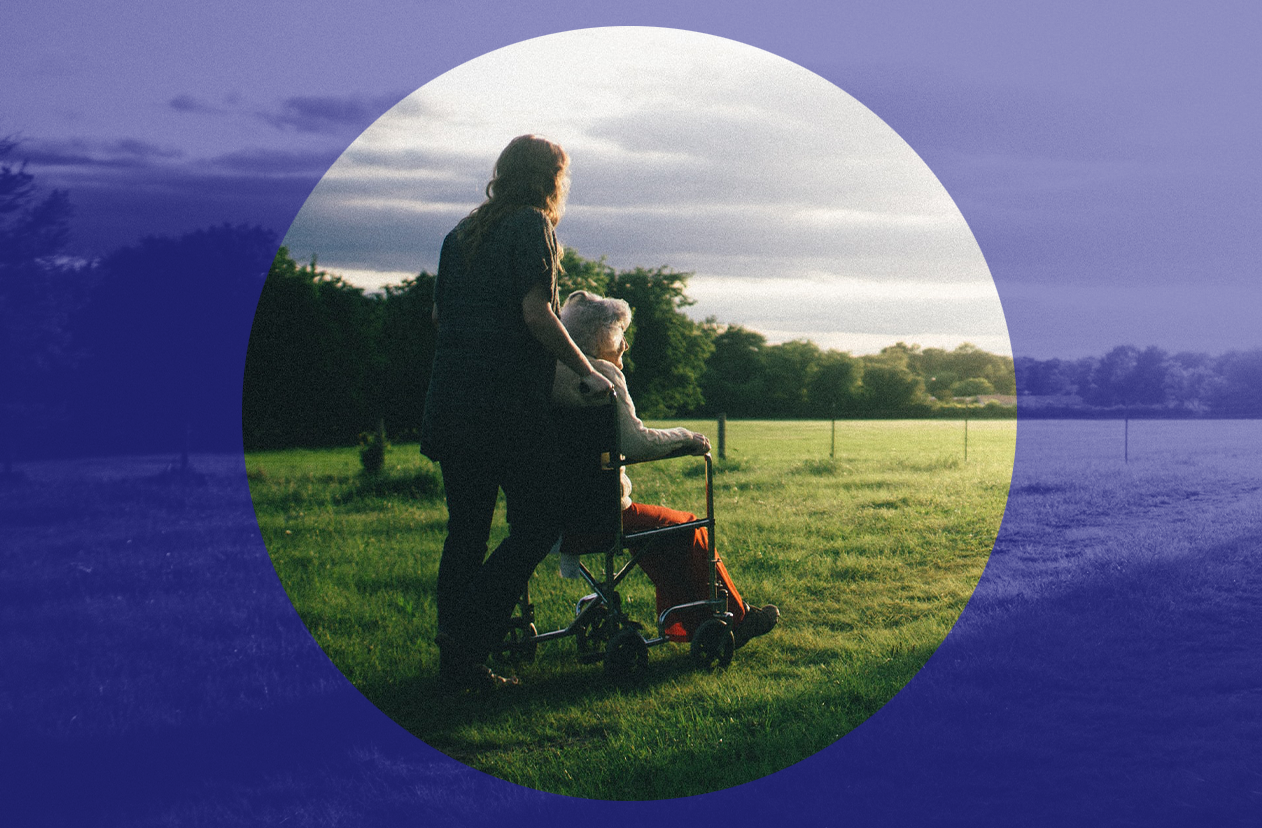 “The substantive issues about the way older people were discharged from hospital last year are not about legal processes at all – they are about whether appropriate measures were taken to protect vulnerable older peoples’ lives in the face of the unfolding pandemic.”

LAST WEEK, the Mental Welfare Commission (MWC) – a public body that has survived and kept its original name since it was created in 1960 – published its report into discharges of patients from hospital to care home during the early stages of the Covid pandemic. While the contents of the report provide new evidence and insights into what went wrong, its recommendations risk perpetuating the very system that contributed to the deaths of so many older people last year.

The purpose of the report was to look at the legality of the moves from hospital to care homes for people who lacked the mental capacity to take the decision themselves. Its scope therefore was therefore quite limited and its primary focus was on whether older people who were unable to take decisions themselves were discharged to care homes using an appropriate legal mechanism. There are three lawful means to do this, through a Welfare Guardian or a Welfare Power of Attorney, legal appointees who are empowered to take a decision on a person’s behalf, or through Section 13ZA of the Social Work Scotland Act.

Section 13ZA was introduced in 2007 as a fall-back legal provision for people who have no welfare guardian or attorney. It was intended to help address the ‘problem’ of delayed discharges and, in particular, to speed up the moves of older people with dementia from hospital into care homes. It states that, “where it has been decided that an adult’s needs call for the provision of a community care service and where it appears to the local authority that the adult is incapable in relation to decisions about the service, the local authority may take any steps which they consider would help the adult to benefit from the service.”

The research carried out by the MWC found that, out of a sample of 457 moves from hospital to care home between March and May last year – about 10 per cent of the total discharges – in 20 cases there was no legal authority to do so. In some cases, this was because Health and Social Care Partnerships (HSCPs) wrongly believed the provisions within the Coronavirus Act to suspend 13ZA had been activated. It hadn’t (nor had a similar provision to suspend the need for Social Work Assessments that is not mentioned in the report). It should come as no surprise, however, that in the chaos at the start of the pandemic there was some confusion about the law and that the correct legal boxes weren’t always ticked.

The more significant findings relate to the further analysis the MWC conducted to assure themselves that legal rights were “protected and respected”. They found that out of 267 “attorney related moves”, in 78 cases staff didn’t know what powers were held by the Attorney or Guardian or whether they had been activated. This is important because such powers sometimes include the right to decide where someone lives, but sometimes they don’t and usually they are only activated after an appropriately qualified doctor has made an assessment that the person is no longer able to take a decision for themselves.

Similarly, for local authorities to take decisions on behalf of people under 13ZA, a formal assessment of mental incapacity is required. Of the 90 people discharged under 13ZA, the MWC found such an assessment took place in a “majority” of cases. The report goes on to provides other examples of the law being breached, including one person discharged against their wishes (13ZA can only be used as long as the person involved shows no sign of objecting to the plan). In sum, the MWC’s research shows that legal procedures designed to protect people’s rights were not followed in a significant proportion of cases.

The extent to which those legal procedures mattered at the height of the pandemic is not considered by the report, it’s taken as given that they did. But the MWC does offer some useful comments about why those procedures weren’t properly followed. It suggests that a failure to understand the law properly, particularly what counts as ‘Deprivation of Liberty’, preceded Covid-19. It acknowledges the difficulties caused by remote working, which limited the contact between social work staff in HSCPs and older people, their carers and hospital staff.

The report then makes 11 recommendations to address this failure to follow legal procedures. Most of these are directed at HSCPs and are technocratic in nature: more training; better recording; keeping copies of documents detailing legal powers of attorneys on file; greater consistency in practice; new audit processes. Two of the recommendations are for the Care Inspectorate, asking that they should take accounts of the report’s finding and scrutinise HSCPs use of 13ZA in future inspections. The final recommendation is that the Scottish Government should monitor the implementation of all the above.

The overall thrust of the recommendations is that to make the law work, front line staff need to have their work audited by managers, then inspected by the Care Inspectorate and finally checked by the Scottish Government.

These recommendations not only miss the point – they promote the validity of the sort of top-down, centralised managerial approaches that led to the disaster in our care homes a year ago. Let me explain.

Last Friday I received, in response to a Freedom of Information request (submitted last August), a copy of a letter Malcom Wright, Director General for Health and Social Care at the Scottish Government, had sent to HSCPs on 6 March 2020. Mr Wright, who suddenly retired last May, explained the need to create capacity in hospitals, set targets for reducing the number of delayed discharges by the start of April and then went on to say:

“I appreciate that there are structural limitations at this point of achieving to a fraction of the current delayed discharge figures, which is where we need to be in reality. These include current legislative arrangements on AWI; availability of care home placements and care at home provision; financial resources; Choice of Accommodation protocols and public messaging. I can advise that in respect of our delivering the maximum possible capacity and space within our hospital system to provide as much resilience as possible, we need to consider all options to address existing ‘barriers’ in the current situation.” (My emphasis).

You don’t need to look any further to understand why HSCPs did not always follow correct legal procedures last Spring. Told by the Scottish Government to pull out the stops to get older people out of hospital they considered all options to do so. It would appear then that the law was not the most important factor to consider in the pandemic. That may have been right; the problem was that the Scottish Government letter failed to mention risks or that HSCPs had a duty to care.

The MWC report fails to offer any full analysis of why legal procedures were not followed and is silent about the role of the Scottish Government. The consequence is the report recommends that the cause of the problem, the Scottish Government, be put in charge of sorting it out. Scottish ministers will no doubt be delighted to be let off the hook.

Sadly, the MWC’s recommendations appear shaped by the same ideology that informed the thinking of the Feeley Report into Adult Social Care. The assumption, despite all the evidence to the contrary, is that the problems of the social care system are best solved from the top by management-driven “improvement” programmes. It has been that thinking that let down the people of Scotland so badly.

The substantive issues about the way older people were discharged from hospital last year are not about legal processes at all – they are about whether appropriate measures were taken to protect vulnerable older peoples’ lives in the face of the unfolding pandemic. For example, what checks were made on care homes prior to discharge to see if they were free of Covid-19 or, if not, whether the outbreak was under control and the care home concerned could care for someone safely? Conversely, in the cases of the people we know were discharged from hospital having tested positive for Covid-19, were checks made to ensure that care homes could quarantine them properly? These are the sort of questions a public inquiry into the pandemic needs to ask.

The underlying issue is whether frontline staff were encouraged to use their judgement when it came to the duty of care (as best they could, given the circumstances) or whether they were put under pressure to move older people with no consideration of the consequences.

Unfortunately, the narrow legalistic approach of the MWC means its report does not help much with whether people’s wider moral and human rights were respected. The report fails to say whether any of the 457 moves it considered involved people who had Covid-19. It makes no attempt to ascertain the extent to which Guardians and Attorneys were given any advice on how they might decide whether it might be safe to move a person to a particular care home. Nor on whether Guardians, Attorneys and relatives in 13ZA cases were put under undue pressure to get people out of hospital. That there was such pressure, we know from media stories last year of families who objected to their relative being discharged to a care home where there was an outbreak of Covid.

Ultimately it should be families and social workers who act as the moral guardians of people who lack the mental capacity to take decisions. Part of the problem is that in spite of all the talk of rights, when push comes to shove, as it did last March, families have no power to challenge the system. That was shown again in the extended ban on visits to residents in care homes.

All the Scottish Government’s and Adult Care Review’s fine-sounding talk of the need for a rights-based approach to social care is just that, an approach. It will do nothing to empower families to prevent bureaucrats and politicians from taking life-changing decisions over their heads. Nor will a rights-based approach protect vulnerable people from the rapacious demands of the private sector, which is why Scottish Care, the organisation representing care businesses, is so keen on the Adult Care Review: it knows the recommendations in that review will offer no challenge to the power of corporate interests.

The other part of the problem is that social workers, who are trained to work with people and advocate for them where needed, have over the last thirty years become increasingly constrained about what they can say or do. Social work is now so bureaucratised – the procedures governing discharge from hospital are a prime example – that there is little room left to think and act independently. The situation has been made worse by the integration of adult social care with health, which has resulted in social care priorities being almost entirely determined by the perceived needs of the NHS, most notable hospital discharge. When the Covid pandemic struck, there were few checks and balances on what NHS managers could do and no-one left to speak out.

That, rather than whether the appropriate procedures were followed or not, is what is important to understanding how people infected with Covid-19 were discharged to care homes and the impacts that had.