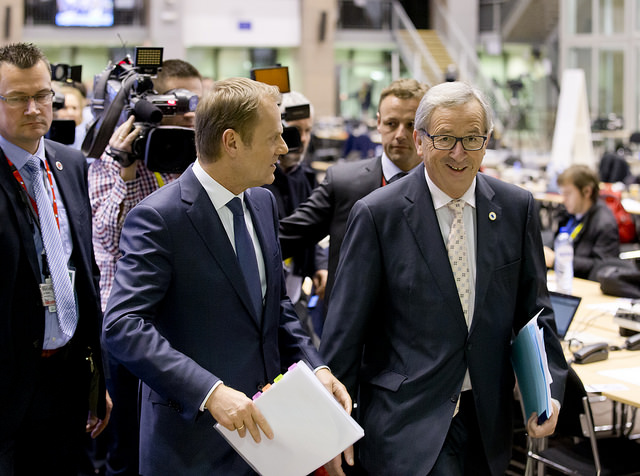 The European Network Against the Arms Trade have issued a joint statement on the new European Defence Fund. CommonSpace re-publishes it here.

OUR EU leaders are currently discussing the next EU budgetary cycle that will run from 2021 to 2027. Among the proposals, one has so far caught little attention from the public and has been barely analysed in the EU media, let alone at national level. Yet the recently set-up European Defence Fund would deserve a wider and critical public debate, with its €13 billion draft budget for a new area of work, the Research & Development of new weapons and military technology.  With this statement, the signing organisations intend to raise awareness among citizens and the press about this development, and alert them to the major risks the current proposal entails.

The risk of diverting human and financial resources from civilian priorities

If the Defence Fund proposal goes through, €13 billion (on average €1.85 billion per year) will have to be found in the next EU budgetary cycle (MFF 2021-2027) and will be lost for the civilian objectives of the EU.

It is quite unlikely that Member States will be willing to increase their contributions to compensate both Brexit (an estimated net loss of €10 billion/year for the EU budget) and new areas of work. Cuts are already planned in the cohesion and agricultural funds, as well as in some external aid programmes.

In addition, a range of civilian programmes are now asked to include Defence sector needs in their priorities: this goes from structural and regional funds to transport programmes and even Erasmus +.

There is also a high risk of diverting “human capital”: indeed a skilled work force, in engineering or technology, is already scarce; thus both the EU Institutions and the industry are likely to divert existing human resources from civilian programmes and priorities to military-related ones.

Like in other policy areas, corporate capture over EU military-related initiatives is staggering. The Group of Personalities (GoP), founded in 2015 as an advisory group, stands out as a bad practice.

This Group was made up of 16 members, 9 of which were industry representatives. Many recommendations of this GoP turned into concrete provisions which make the Defence Fund look more like a subsidy to the industry than a policy-driven tool. And 6 out of those 9 corporate members of the GoP are now receiving EU funding under the first military projects of the Defence Fund.

In contrast, critical civil society is hardly listened to and a lack of transparency prevents it to play its watchdog role. Even the most basic information is withheld behind a veil of national security.

Information about who are the experts advising the Commission or helping implement the funding is kept secret, and recommendations by the European Ombudsman on transparency are being ignored. Even more worrying is that this lack of transparency will be institutionalized in the Regulation for the Defence Fund 2021-2027, which plans to keep the consulted experts a secret in derogation of normal practices.

The Defence Fund legislative texts remain vague regarding what type of weapon systems and military technology should be developed. In practice, the definition of priorities will stay in the hands of the Member States, and the European Parliament is not involved, in derogation of normal practices. However, information in the public domain shows that the focus for the first projects is on unmanned and autonomous systems.

In addition, Member States refused to exclude funding for the development of fully autonomous weapons in the 2019-2020 pilot phase of the Defence Fund, and the draft Regulation for 2021-2027 specifically mentions “disruptive technologies” as a focus, meaning weapons or technologies which “can radically change the concepts and conduct of” war, such as artificial intelligence. Concretely this means that EU taxpayers money could pave the way for new controversial military technology such as ‘killer robots’, unless the Parliament takes a strong stand against this in the coming weeks.

The risk of exacerbating the global arms race, which in turn feeds conflicts

The EU collectively is the second largest supplier of weapons in the world after the US, and about a third of those exports go to the Middle East, as well as to other areas of conflicts or growing tensions. Those weapons risk or are actually contributing to civilian deaths and suffering, infrastructure destruction and the displacement of thousands of people.

Parallel to that, one of the expected outcomes of the European Defence Fund is to boost the global competitiveness of the military industry, including its capacity to export. Given that national markets are already too small to absorb European over-production and provide higher profitability, the arms industry will put an even greater emphasis on exports, including of the EU-funded new military technology as a crucial competitive edge.

This will inevitably contribute to the global arms race in a context of growing international tensions. In turn, this arms race exacerbates the risk of conflicts.  Indeed, if weapons are not per se the cause of conflicts, their proliferation encourages both state and non-state actors to revert to armed force and violence in response to political or social crisis, rather than trying to achieve peaceful solutions.

To conclude, there could be potential benefits from the pooling together military research and development, such as savings from reducing duplication. However, the proposal as it currently stands clearly says it is not substituting EU for national funding and encourages EU Member States to continue increasing their own spending.  And there are many other examples of contradictions between the stated objectives and the expected concrete results of the Defence Fund, under the current provisions.

Movement for the Abolition of War, UK