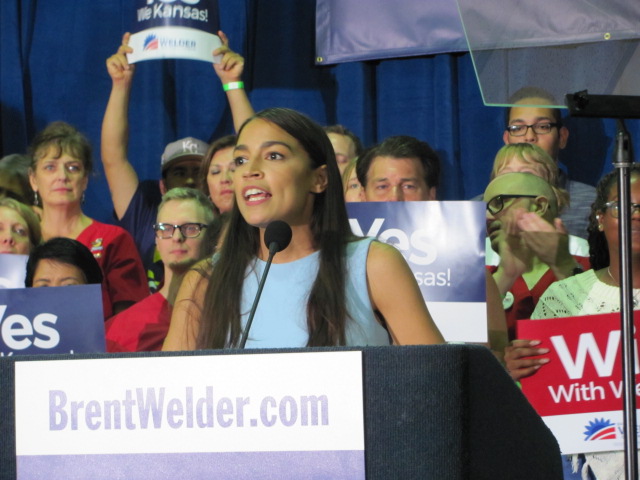 Sturgeon has praised Alexandria Ocasio-Cortez for “rocking the boat” – does the independence movement need to pick up some of her radical ideas?

FIRST MINISTER Nicola Sturgeon took Twitter time out from Brexit on Tuesday [29 January] to make a perhaps surprising intervention into the internal politics of the Democrats in the US.

Responding to an article in The Hill about moves within the party to unseat Alexandria Ocasio-Cortez in the next Democratic primaries for Congress, Sturgeon defended the democratic socialist firebrand, saying “It’s amazing how threatened some people are by clever young women”. She went on to add that those in her party trying to oust her were doing so “just because she’s rocking the boat”.

Sturgeon is of course absolutely right: Ocasio-Cortez has in months gone from being a total unknown to be a major talking point in US and indeed international politics because she’s willing to challenge the status quo so loved by the Democratic establishment, while her profile has riled those who are accustomed to young female outsiders knowing their place and towing the line.

But AOC has achieved more than just upsetting establishment Democrats – her focus on big policy ideas, especially on the economy, has pushed new thinking from relative obscurity to the fore of political debate. The usual suspects who have attempted to rubbish her ideas as naive or dangerous have struggled to defeat arguments that are based on sound evidence and which could address the big challenges of our time.

In fact, there is a lot that Sturgeon and the wider independence movement could learn from Ocasio-Cortez to enhance our vision for Scottish independence.

Ocasio-Cortez advocates an ambitious public spending programme and is, inevitably, hit by the same question over and over again: how would you pay for it?

But rather than play the neoliberal economics game which many on the left have fallen into of advocating balanced budgets of tax and revenue, AOC has instead made the entirely rational and logical case for deficit spending – the government spending more into the economy than it brings back in revenue.

This is of course what government’s mainly do anyway, but in the age of austerity many Democratic leaders have advocated a “pay as you go” fiscal policy of spending no more than revenue, a policy which Ocasio-Cortez has opposed and voted against, pointing out that it places entirely unnecessary constraints on the ability of the government to fund spending programmes when the US state is able to create new money cost-free.

AOC has said Modern Monetary Theory, which argues that there are no inherent restraints on Government spending and that tax is a means of controlling inflation rather than raising revenue, “should be a larger part of the conversation”.

That is equally true in Scotland, where only in recent weeks a debate has begun about the merits of MMT to Scottish independence. The SNP’s Growth Commission, which advocates Sterlingisation, would rule out the possibility of deficit spending through government money creation because Scotland would be using another country’s currency. This would set strict limits on public spending, and thus inhibit the sort of spending programme AOC has envisioned.

70 per cent top rate of Tax

AOC’s support for deficit spending by no means rules out increasing taxes. Infact, perhaps her most important and widely recognised policy intervention so far has been a 70 per cent top rate of income tax.

This proposal has led to the usual squawks and fearmongering, including a particularly absurd outburst from Grover Norquist, the president of Americans for Tax Reform, who likened it to slavery.

Norquist tweeted: “Slavery is when your owner takes 100 per cent of your production. Democrat congresswoman Ocasio-Cortez wants 70 per cent (according to CNN) What is the word for 70 per cent expropriation?”

Despite (or perhaps because of) Norquist’s job, he clearly doesn’t actually understand marginal tax rates: AOC is proposing 70 per cent on annual earnings above $10 million, not 70 per cent of a person’s total income. Why anyone needs or deserves to earn more than $10 million per year is not clear (100 per cent top tax rate anyone?), but AOC’s proposal has received widespread acclaim, including from many economists (Paul Krugman among them) who have pointed out that the evidence suggest such a policy is likely to stimulate economic activity.

One particularly noteworthy put down of critics of AOC’s tax policy came at Davos last week, when billionaire Michael Dell responded to a question about whether he supported a 70 per cent top rate by saying “name a country where that’s worked, ever.” An MIT historian on the panel, Erik Brynjallsson, responded: “The United States”.

Amid laughter, Dell founder Michael Dell explains why he would’t support Rep. Alexandria Ocasio-Cortez’s call for a higher marginal tax rate on people earning over $10 million: “I’m not supportive of that and I don’t think it would help the growth of the US economy.” pic.twitter.com/0KqeFLQUjB

He pointed out that in the US “from the 1930’s to about the 1960’s the top tax rate averaged around 70 per cent, at times as high as 90 per cent, and those were actually pretty good years for growth.”

The Scottish Government has been shy about raising the top rate of income tax above 45 per cent since it was devolved, citing concerns that total revenues could be lost due to high income earners registering south of the border to avoid the higher rate.

The Growth Commission did not make any mention of income tax, but said that corporation tax should be no higher than in the rest of the UK, which is currently set to be reduced to 17 per cent, one of the lowest rates in the EU and significantly lower than in the US.

On Monday, The Guardian reported that the Treasury has now revised its calculations for the loss to public revenue from reducing corporation tax, finding that the loss is significantly greater than previously thought, with every 1p reduction now expected to reduce tax take by £3.1 billion rather than £2.8 billion. Is this a sensible race to the bottom for an independent Scotland to be joining?

So a bit of Ocasio-Cortez’s radicalism on tax policy would not go amiss in the case for Scottish independence.

Deficit spending and higher taxes on the rich are all part of a hugely ambitious plan to drastically reduce America’s carbon emissions while creating millions of high-quality jobs through a Green New Deal.

AOC has argued for a 100 per renewable energy system by 2035, with the conversion of the power grid to zero emission energy sources and the mass upgrading of buildings to make them energy efficient. The plan would be for the US to be 100 per cent fossil fuel free within 16 years.

Ocasio-Cortez has worked with the Sunrise youth movement to bring a proposal for a Green New Deal to the floor of Congress, but in a country where only 17 per cent of electricity currently comes from renewables sources, the plans have a level of ambition not many Democrats are willing to embrace yet: only 12 representatives have so far backed it.

But with the IPCC report last year warning that 45 per cent world emissions reductions are needed by 2030 to have a chance of preventing catastrophic climate change, AOC’s ambitions may be too much for the American political class, but matches what climate scientists say needs to be done to prevent permanent ecological disaster.

The Scottish Government draft Climate Bill currently proposes 90 per cent reductions in emissions by 2050, an aim which environmental activist say does not rise to the scale of the challenge. The Scottish Government’s continued support for the fossil fuel industry in the North Sea has also been criticised.

A bold vision for Scottish independence would combine together the country’s enormous renewables potential, the need to rapidly end north sea oil production and the hundreds of thousands of high productivity, high pay jobs that could be created by a Green New Deal in Scotland.

As part of the Green New Deal idea, Ocasio-Cortez has backed a job guarantee scheme for the US to ensure full employment.

The Job Guarantee would mean that the government would provide a job for anyone who wanted one.

The idea is to provide a baseline for employment, including standards and pay rates, which would prevent businesses from competing in a race to the bottom in the labour market. A tightening of the labour market, with no involuntary unemployment, would push up pay rates and increase trade union strength, as workers would have more options and therefore more bargaining power.

“This proposal would dramatically upgrade the quality of employment in the United States, by providing training and experience to workers while bringing much-needed public services to our communities in areas such as parks service, childcare and environmental conservation,” AOC’s website states.

The Job Guarantee proposal again draws on MMT: by creating new money with the specific aim of providing jobs to those who don’t currently have them to engage in socially useful activity, it is unlikely to be inflationary as it deploys currently under-utilised economic resources.

A Job Guarantee as part of the Scottish independence case could provide a compelling vision of full employment and higher quality jobs, which would help renew trade union power and end the scourge of precarious and insecure work.

Breaking up the banks

“Systemic risk in our banking system leads to the concentration of wealth and power into fewer and fewer hands and also leads to increased risk that individuals will lose their savings due to the irresponsible decisions of bank management. We should restore Glass-Steagall to make sure our banks can’t gamble with our money.”

Ocasio-Cortez’s plans to regulate the banking sector would see the re-introduction of Glass-Steagall, banking legislation first established after the 1929 Wall Street Crash, which split up retail and investment banking, and was repealed 70 years later by Bill Clinton.

Calls for similar measures after the 2008 financial crash have been widespread, but have so far not been introduced in any western country, with “too big to fail” banks if anything becoming more economically and politically dominant than pre-crash.

The Growth Commission plan is to “mirror” UK banking regulations, which are designed to serve the interests of the City of London. This would be a major risk in the context of Scottish independence, with Scotland’s banking sector an even larger percentage of GDP than in the UK as a whole.

Properly regulating and breaking up Scotland’s banking sector – massively over-concentrated around just two firms, RBS and HBOS – would be a good first step to taking the threat of another financial crash seriously.