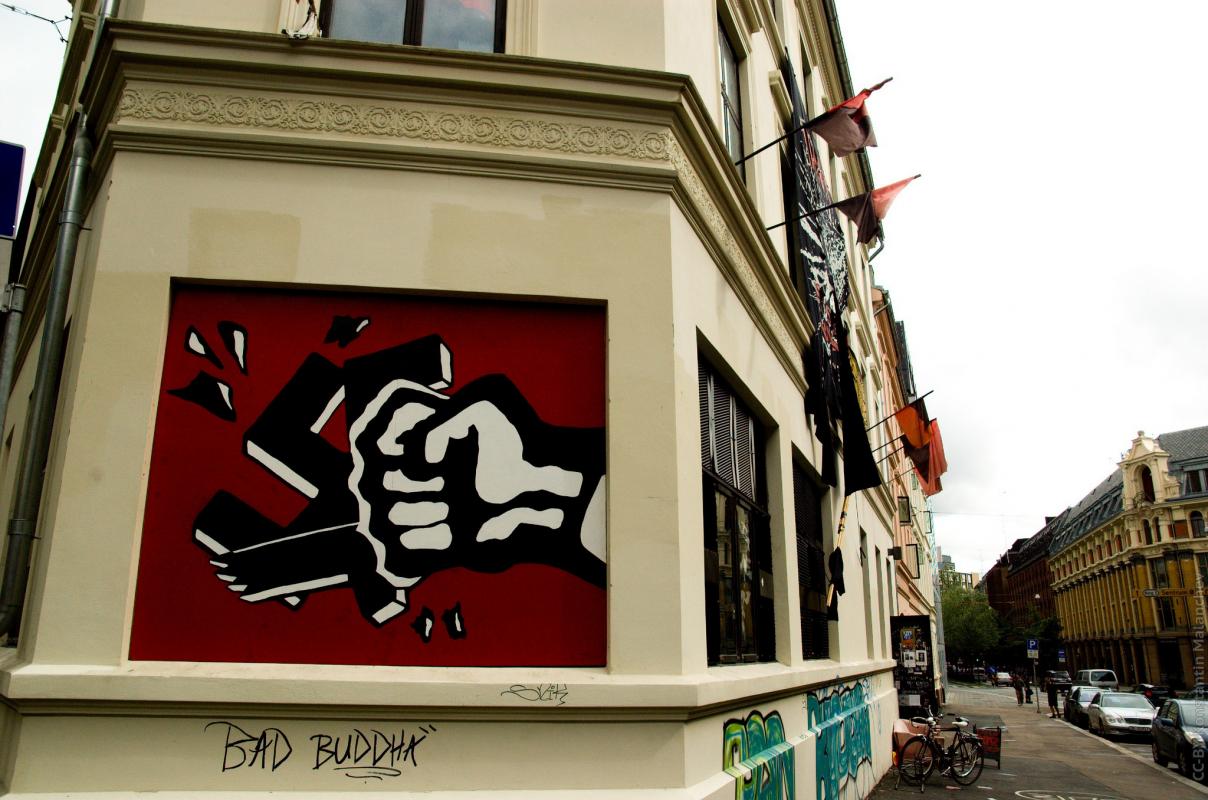 BUSINESS FIGURE and Remain campaigner Gina Miller yesterday told the Liberal Democrat conference “…the fascism of the left is every bit as terrifying and destructive as the fascism of the right” in a speech bemoaning the weakness of the political ‘centre’.

She joins a chorus of other establishment figures arguing for a ‘horseshoe’ theory of the political spectrum, where the supposed centre sticks out as the politics of liberty and reason, and the left and right meet at the extreme fringes where they share much of their ideology in common.

But this is not just ignorant of the historical and modern reality of fascism and anti-fascism. It is also deeply wreckless.

1. Fascism isn’t a ‘style’ of politics

Description rather than analysis tends to be the vogue when it comes to the f-word. So fascism, a real historic phenomenon with definite causes and consequences becomes just a sum of parts: Nationalism, authoritarianism, violence, racism, conformity, machismo and so on.

The problem is a huge variety of political movements and regimes share these characteristics with fascism. Think Hindutva in India (presently in power and lauded by the UK Government for their pro-business stance), Ulster loyalism, the AK Party in Turkey, Zionism in Israel and the Saudi regime in Saudi Arabia, or European colonialism in the late nineteenth and early twentieth centuries.

Indeed, they share these characteristics with many ‘centrist’ governments. Blair’s New Labour broached little dissent to the leading clique and the obscurantism of market economics went without challenge. Blair fostered a culture of demonisation of Muslim ‘others’ and extended the capacity of the state to persecute the Muslim community. He was infatuated with military power and centred his project on hugely destructive wars.

But that doesn’t make any of these examples ‘fascism’.

2. Fascism is a reaction to the left’s egalitarianism

It is no mistake that the Fascist movements first appeared in countries where the radical left posed a major threat to the established order. World War one was ended by a succession of working class and leftwing uprisings around Europe. In the wake of the end of the war, and the Russian Revolution the radical left pushed for power. They came closest in Italy, Germany and Spain.

The ‘Two Red Years’ in Italy ended with the coming to power of Mussolini’s Fascists. Repeated attempts at revolution in Germany convinced a reluctant establishment to swing in behind Hitler’s Nazi party. The creation of the Spanish Republic led to Franco’s revolt with the backing of the elite. Disgust with the French leftwing Popular Front would encourage France’s state leadership to collaborate with the Nazis.

Everywhere the new fascist politics dominated its politics were the photographic negative of the left’s. Where the left had urged equality between the races and between men and women, fascism exalted inequality to a spiritual and biological truth. Where the left had sought to democratise society through mass participation, fascism banned unions, political parties, protests and book clubs. Everywhere fascism reasserted traditional economic and social inequalities, protecting the property of the rich.

Fascism’s politics are not an arbitrary collection. They are the response of fear from those with power in society to challenges from the left.

This history is why the Holocaust historian Enzo Traverso called the period 1914-45 the European Civil War, civil in the sense that it unleashed a war of ideology between the left and right in every European culture.

Everywhere that fascism existed, in Russia as a reaction to the revolution, in Italy, Germany, in Spain, in the Battle of Cable Street in London and in innumerable other conflicts around the continent, the left fought it. There are no examples of leftwing movements joining with fascism. But there are many examples of the ‘centre’; of the establishment and elite interests tolerating, protecting, promoting and funding fascist movements.

The centre is helping to foster the far right today by providing it with two things. First, with the ideological equipment with which it constructs its world view. No consistent opposition to fascism can come from an ideology which itself accepts riggid hierarchy, enormous wealth disparity, militarism and racism. The ‘centre’ adopted Islamophobia and a Pan-European identity first, and the far right mimicked them.

Second, elite figures like Gina Miller and centre parties like the Liberal Democrats have created an enormous amount of social alienation and frustration that can be harnessed by the fascist right. The Lib Dems are, as everyone knows, jointly responsible for the massive social destruction of austerity measures and did nothing when in government with the Conservatives to curb elite power and wealth.

Again, because the left opposses the social order, it can also attract this discontent away from fascism. The centre cannot.

4. Fascism is a serious threat of violence right now

This matters not just because of what fascism might become in the future, but because of the threats it poses to society now.

The Western world is witnessing a new wave of extreme fascist violence. From the assassination of Jo Cox MP in 2016 (a member of that leftwing fascist outfit the Labour party) to the murder of Heather Heyer, who opposed fascism in Charlottesville in 2017, to innumerable attacks on Muslims, Black people, immigrants and members of the LGBT+ community.

The conflation of victims of this terrorist rampage with their assassins is more than morally wrong, it highlights the complacency of political elites. The typical centre right and centre left response to the fascist right has been to seek to accommodate it by moving to the right on issues like immigration. This strategy has proved in recent years and decades only to grow the far right, which has now gained considerable momentum across Europe, entering government where the establishment centre have continued to cooperate with them.

5. Horseshoe theories are targeted at the left, not ‘both sides’

Though Miller’s pitch is from a “liberalism” that equally opposes left and right, it is in fact a clear attack on the left only.
Earlier month, openly fascist marches in Germany saw protesters chanted their support for Hitler and his Nazi party. Calling these people fascists to their faces is no way to discredit them. They openly embrace the term.

In his efforts to coordinate the far right across Europe, former Donald Trump adviser Steve Bannon told them to wear the term ‘racist’ as a badge of honour.

Victor Orban in Hungary, an important ally of the UK Conservative Party, uses openly antisemitic campaigns and language to attack his opponents.

These accusations, which are now being routinely used by the powerful against the left, are tailor made for those who make calls for equality – to paint them as hypocritical and dangerous.

This campaign against the left whilst trying to shore up the destructive practices of the elite can only help the far right.