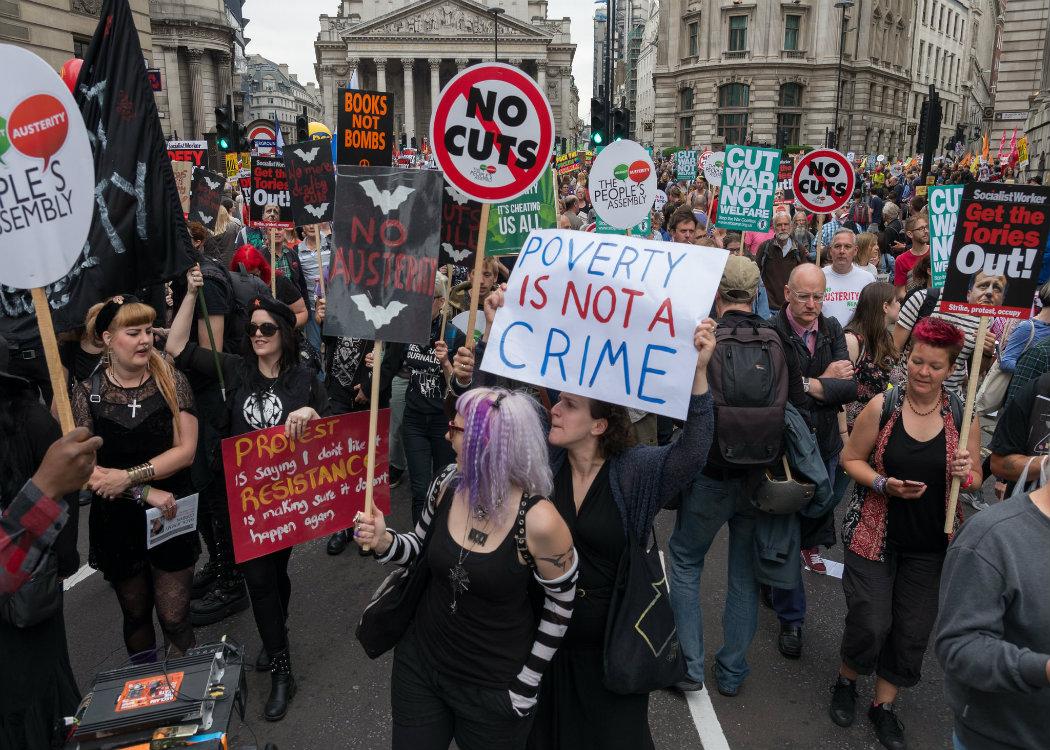 IN JUST A FEW days at the Conservative party conference in Manchester, five senior ministers have criticised groups across UK society and beyond.

Workers on low wages are set to lose on average PS1,300 a year from cuts to tax credits.

The health secretary Jeremy Hunt said the move was an “important cultural signal” for those on less than PS16,500 a year to learn about “independence, self-respect and dignity” .

“What the Conservatives say is how that PS16,500 is earned matters. It matters if you are earning that yourself, because if you are earning it yourself you are independent and that is the first step towards self-respect,” he suggested of the millions of workers often stuck on insecure, low paid jobs.

Secretary of trade union Unite Len McCluskey said the comments were a “disgraceful insult from the richest member of the cabinet to millions of people struggling to get by, working hard for long hours in insecure employment”.

When the UK Government decided to raise the minimum wage, it decided to leave those under the age of 25 on lower rates.

Hancock, the Tory minister for the Cabinet Office, said : “This was an active policy choice. Youth unemployment, whilst falling quite sharply, is still a long way above the unemployment rate for the over 25s.

“Anybody who has employed people knows that younger people, especially in their first jobs, are not as productive, on average.”

Dave Prentis, Unison general secretary, dismissed the remarks: “Remarks like this show just how out of touch the government is. Young people are every bit as productive as older workers, and can have just the same responsibilities as their more mature workmates.

“Younger workers under 25 with families face a double whammy. First they are denied a pay rise and then they get hit hard by the planned cuts to tax credits.”

3. Iain Duncan Smith: Disabled people should “work their way out of poverty”

Work and Pensions Secretary Iain Duncan Smith has been under fire recently after his cuts to social security were officially linked to the suicide of a claimant.

But that didn’t stop him calling on those with disabilities to work harder in the face of cutbacks.

“We don’t think of people not in work as victims to be sustained on government handouts. No, we want to help them live lives independent of the state,” he told the Tory conference .

“We won’t lift you out of poverty by simply transferring taxpayers’ money to you. With our help, you’ll work your way out of poverty.”

GallusEffie on Twitter from Dunfermline replied: “My disabled son’s (21) major independent skill is fingerfeeding himself. What job does Iain Duncan Smith suggest he do?”

The PCS Union said: “Universal credit has been a textbook case of how not to overhaul public services and [Duncan Smith’s] cruel cuts to social security support for unemployed, sick and disabled people bring shame on the UK as a civilised nation.”

Michael O’Sullivan, a 60-year-old father from north London, committed suicide after his disability social security was removed in September 2013.

When Smith came to Scotland he was confronted by a protestor during his speech, who called him a “ratbag” for his cuts to disability support.

4. Theresa May: Immigrants are to blame for low wages, poor schools, hospitals, housing and transport

The home secretary, Theresa May, used her speech in Manchester to attack immigrants – claiming that it was “impossible to build a cohesive society” when so many people move to the UK.

“It’s difficult for schools and hospitals and core infrastructure like housing and transport to cope,” May claimed, as she promised to crack down even harder on refugees and migrants.

The Migrations Rights Network said May was evading responsibility: “These problems are caused and exacerbated by recent Tory policies. They are using migrants as scapegoats to blame for the problems in society.”

In an attempt to boast of Britain’s cultural prominence, he felt the need to put down the French, Germans, Italians, Spanish and Dutch.

The press team found this hilarious, and promptly shared the full quote: “There are no French Rolling Stones, no German Beatles; there is no Italian Bond, no Spanish Rowling, no Dutch David Bowie.”

Scottish actor Sean Biggerstaff asked: “What the fuck is wrong with Tories?”

There are other countries the Conservatives are even less keen on.

The UK is still carrying out airstrikes in Iraq. The Conservative party wants to expand bombing raids in Syria, and killed two British citizens in a drone strike in the country – despite no approval from parliament.