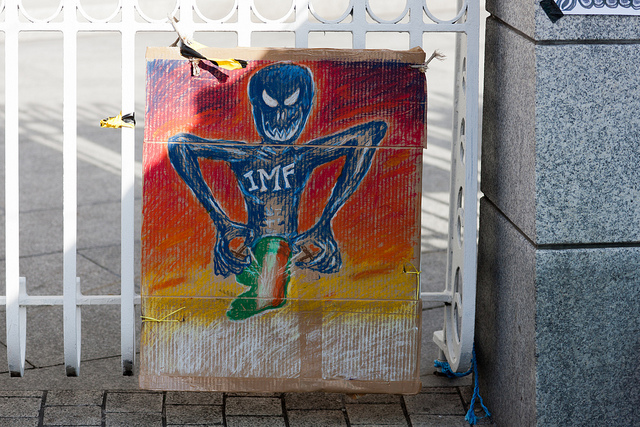 Ahead of the IMF’s conditionality review, trade unions, think tanks and anti-poverty campaigners call for a new approach that prioritises human rights and sustainable development

As the IMF launches a review into loan conditionality – the requirements that the fund imposes upon national governments before it will consider providing economic support – an open letter signed by organisations such as Global Justice Now, the Child Poverty Action Group, Oxfam International and the Common Weal think tank has argued that the restrictive fiscal and monetary policies prescribed by the IMF can have devastating consequences, and have called on the IMF to investigate the impact of their practices of human rights and inequality around the world.

The letter states: “At  the  heart  of  our  calls  rests  a  need  for  the  systematic  integration  of global  civil  society  in  the  consultation  process  and  to  ensure  that  the  voices  of  those impacted  by  IMF  policy  are  listened  to  and  involved  in  its  design  and  implementation.

READ MORE: IMF: Austerity was more damaging to Greece than we thought it would be

“Last  year,  a  UN  expert  warned  that  lending  policies  of  the   IMF  actively  undermine  some  human  rights  and  development  priorities,  as  well  as  promoting  failed   policies  of  privatisation  and  austerity. Moreover, in  June  2018  the  UN  special  Rapporteur  on  Extreme   Poverty  and  Human  Rights  claimed  that  the  world  is  now  ‘suffering  the  consequences  of  the  past   lopsided  approach  of  IMF  to  globalization  and  its  single-­‐minded  pursuit  of  a  model  of  fiscal  consolidation   that  relegated  social  impact  to  an  afterthought.’

“The  conditionality  review  must  thus  revisit  and  investigate  the  impacts  of  IMF  policy  lending  practice  on   human  rights  and  inequality  in  the  past  two  decades.  We  believe  that  fighting  inequality  must  be   integrated  into  loan  programmes  and  conditions,  which  should  include  regular  monitoring  of  the   impacts  on  inequality  of  such  programmes.”

The IMF was formed in 1945 as an international financial safety net, intended to support the Bretton Woods-pegged exchange rate system. However, critics of the Fund have for decades argued that its influence benefited rich industrialised economies, and that the conditionality it imposes upon its client-states forcibly restricts the sovereignty of those nations who vary from the ‘Washington Consensus’ of economic orthodoxy and make impossible demands upon emerging market states.

The unforgiving conditions of the IMF were particularly evident during the 1980s sovereign debt crisis and the financial crisis of many emerging markets during the 1990s, and are formally tied to what the IMF terms ‘structural adjustments’, which typically include: harsh cuts to public spending, the devaluation of currencies, trade liberalisation, altering national law to favour foreign investors, the removal of price controls and state subsidies, and widescale privatisation of public utilities.

Amongst the most notorious recent examples of this program came in 2015, when as one of the three institutional partners comprising the ‘Troika’, along with the European Commission and the European Central Bank – the IMF demanded that the Greek Government impose crippling austerity measures as a condition for $90b in further loans.

These loans did not, in effect, present actual assistance to the Greek economy, as the loans were earmarked almost exclusively designated for repayments to the Troika, European banks and foreign investors for earlier loans made to Greece. As part of this deal, Greece was forced to further cut pensions, public sector jobs and wages, raise taxes and accelerate privatisation, all while submitting national policy decisions to the Troika’s power of veto.

“Last  year,  a  UN  expert  warned  that  lending  policies  of  the   IMF  actively  undermine  some  human  rights  and  development  priorities,  as  well  as  promoting  failed   policies  of  privatisation  and  austerity.” Civil society joint-letter to the IMF

While the IMF, along with the World Trade Organisation, has been the subject of strident criticism and opposition from leftist and anti-capitalist forces such as the Occupy movement and the anti-globalisation protests of the early 2000s, recent years have seen some signs that thinking within the IMF may be shifting, in light of the widespread outrage which greeted its role in the Greek crisis.

In 2016, a group of IMF economists questioned the neoliberalism typified during what the monetarist Milton Friendman called the “economic miracle” of General Pinochet’s Chile and subsequently embraced by many Western governments.

While defending some aspects of the neoliberal agenda underpinned by IMF practice, the IMF economists acknowledged that increased inequality appeared to be a “trade-off” demanded by neoliberalism for economic growth, but that such inequality hurts the level and sustainability of that growth. The team concluded that even advocates of neoliberalism must pay heed to the distribution of wealth and resources.

“The conditionality review offers an opportunity for the IMF to reassess the current approach to conditionality – instead replacing it with a framework that protects human rights, backs inequality reduction and supports the Sustainable Development Goals.

“The IMF’s history of using its financial leverage to squeeze countries to breaking point is well known so if they now understand the damage that their policies have inflicted, it is now time for them to chart a very different course and join the campaign against austerity.” Common Weal head of research Dr Craig Dalzell

“The significance of the IMF in shaping the response to crises cannot be overstated.

“The letter was a collective project, and the variety of groups and organisations that have signed the letter speaks to its significance. From trade unions, women’s groups and global civil society organisations to academics and think tanks, voices throughout the world are demanding a change to status quo.”

Dr Craig Dalzell, head of research at the Common Weal think tank, also commented: “Ten years on from the 2008 financial crisis, the financial and political sectors appear to have learned very little from the experience. ‘Bail out and Carry On’ was the order of the day and this has had profound implications for those of us who were left to carry the actual cost in terms of austerity. And yet, a few voices are now speaking out – sometimes from surprising places. The IMF themselves have admitted that they failed to realise that austerity has done more damage than good.

“Words are nothing without actions, however. The IMF’s history of using its financial leverage to squeeze countries to breaking point is well known so if they now understand the damage that their policies have inflicted, it is now time for them to chart a very different course and join the campaign against austerity and start helping countries invest in and for their people, rather than for their financial sectors and shareholders. Common Weal is proud to be helping to work towards this goal.”