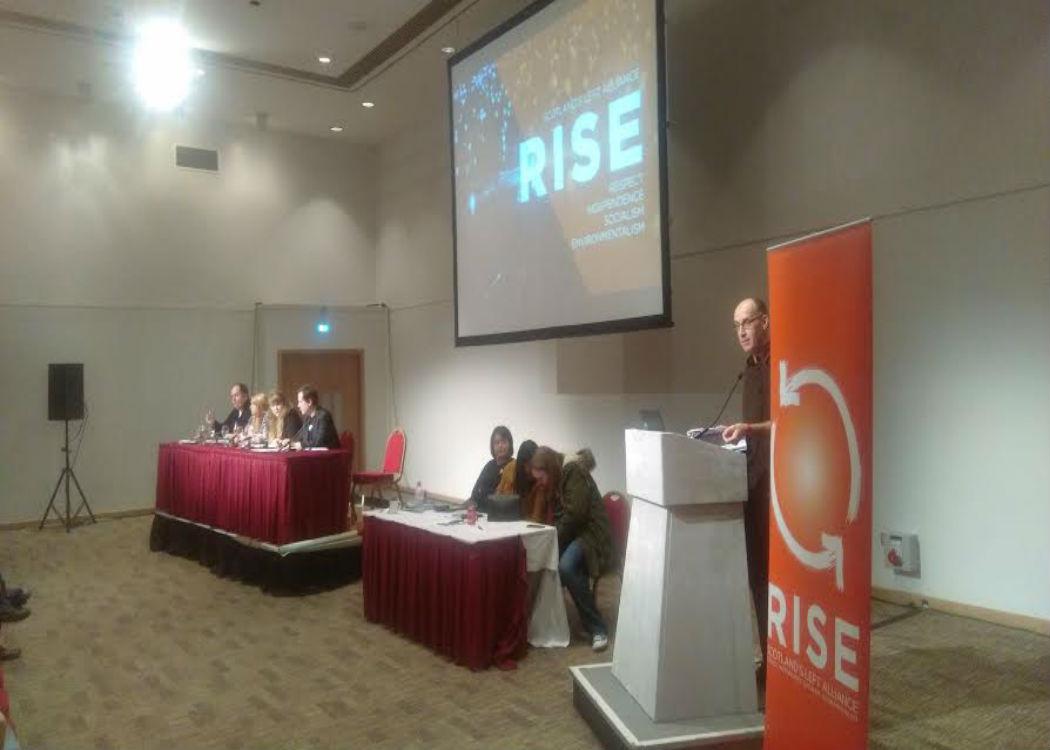 Policies agreed by the Rise membership include the abolition of Police Scotland and building 100,000 homes

Taken as a whole, the Rise policy programme adopted on Saturday (5 December) represents the most radical policy prospectus of any produced for the 2016 Scottish elections.

Rise advocates the construction of half a million new affordable houses over the next 25 years to end Scotland’s housing and homelessness crisis . As a step towards this goal Rise policy calls for the immediate construction of 100,000 publicly owned houses.

There are currently 150,000 people on local authority housing waiting lists in Scotland.

To implement the policy in full would take a quarter of a century and there is no gaurantee that five consecutive governments would maintain the massive building scheme.

Unitary police force Police Scotland was established in 2013. Rise proposes to return to local forces and to end the practices of stop and search and police carrying guns that were introduced under Police Scotland.

As yet there is no calculation in the policy of the costs involved in reversing the recent unification of Scotland’s police force.

Rise advocates the public ownership of energy companies. It calls for the gradual phasing out of the oil industry to be replaced with renewable energy, which Rise policy says Scotland has in abundance.

Although a transferance of ownership is implied in the policy, there is no detail of wether private energy companies would be compensated and how much this would cost.

5. A new system of tax and purchase rights to redistribute land

Rise will campaign in favour of a new Land Value Tax, a cap on the amount of land any individual can hold and the automatic right of communities and individual tenant farmers to purchase the land they live and work on.

The policy directly references the case of Andrew Stoddart , a tenant farmer of has been forced to leave the land he has worked on for over two decades by the owner of his land.

Rise’s ultimate aim of bringing all of Scotland’s land into public ownership would represent a shift in ownership without precedent in Scottish history.

Rise advocates the decriminalisation of all drugs, and the introduction of a public programme of drug rehabilitation. The policy states that the so-called ‘war on drugs’ has resulted in organised crime and addiction.

Rise will campaign to have employers who use zero hours contracts sanctioned with the withdrawal of subsidies and awards.

The policy is one of several that Rise will campaign for under the auspices of an Employment Freedom Bill. Other policies attached to the Bill, much of which could only be instituted if employment law is devolved to Scotland, include employee involvement in workplace decision making and trade unionism taught to children at school level.