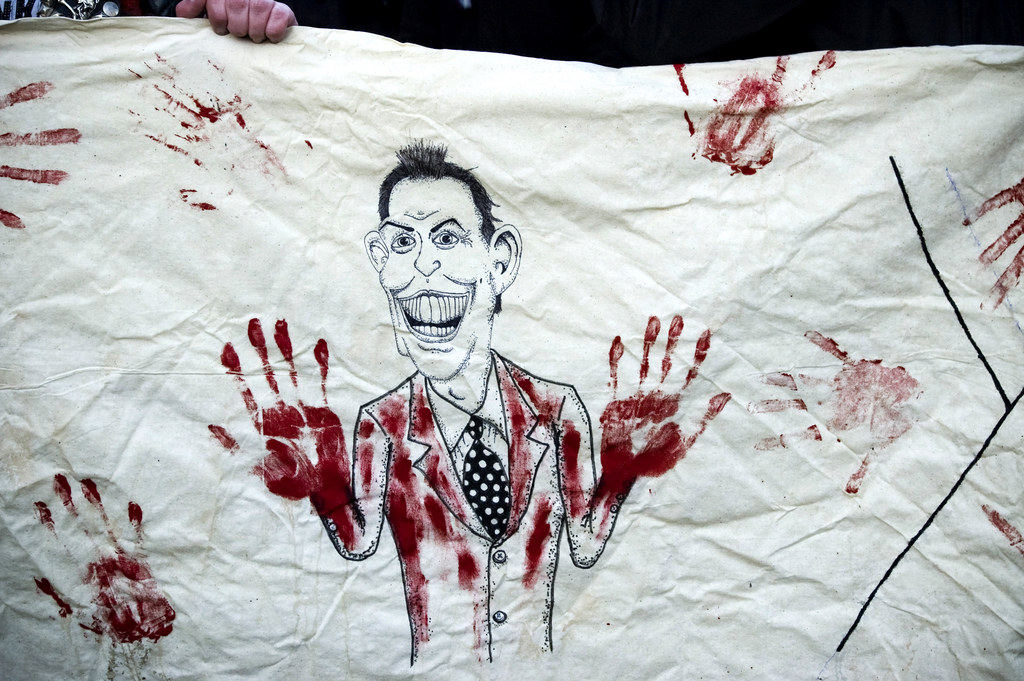 The Chilcot report into the Iraq war has been published after seven years of investigating the UK’s involvement in the Iraq war.

IN 2003, in the teeth of mass public opposition, the UK Labour Government headed by Tony Blair led Britain into war with Iraq alongside the US and other allies.

The war was the biggest political controversy of a generation, and many aspects of the planning for, conduct of and justification for war have been criticised.

CommonSpace breaks down the central findings of the long-awaited Chilcot Report, which spent seven years establishing the circumstances around the war, the claims and the counter-claims.

1. Tony Blair committed to support the US over Iraq in July 2002

The report found that Blair pledged support for US policy over Iraq in July 2002, almost a year before the invasion took place, and months before it became clear the Iraq war would not have United Nations (UN) backing.

Blair told US President George Bush: “I will be with you whatever,” in July 2002, the report found.

The report’s findings, therefore, suggest that UN backing was not of primary concern to Blair. It may also vindicate impressions of the war as a single-minded pursuit by Blair and Bush regardless of wider factors.

Of all the justifications supplied to the British public in advance of the war, the claim that loomed largest was that Iraq had the capacity to attack the UK with chemical or biological weapons within 45 minutes.

The invasion itself made clear that the Iraqi Government had no stockpiles of weapons. The Chilcot report found that Iraq did not pose any threat to the UK, ruling out self-defence as a motivation for war.

The most long-lasting and traumatic damage to Iraqi society has been done by the implosion of Iraq’s multi-ethnic and multi-confessional society.

From the time of the invasion, Iran extended its influence into Shi’ite areas in the south of the country, the Kurds asserted greater autonomy in the north, and an Al-Qaeda franchise (the predecessor to today’s Da’esh or Islamic State) rose up in the Sunni Muslim heartlands in the west of the country.

The Chilcot Report found that those planning the UK/US invasion anticipated these forces interceding in the conflict. It also found that the severity of these problems was “underestimated” and the planning for them inadequate.

Iraq has subsequently collapsed along national and confessional lines and has been the site of genocide. Blair has claimed that the rise of Islamic State is not his responsibility.

The report found that British armed forces were ill-prepared for war. In particular, British troops in the south of Iraq were not prepared for the use of roadside bombs, with the deployment of armoured vehicles being delayed.

Numerous parents of British soldiers killed in Iraq have criticised the government for the shortages, including Rose Gentle, whose son Gordon was killed by a roadside bomb in 2004.

The report confirms Blair chose to go ahead with war despite serious shortcomings in troop equipment.

The security council is the UN’s most influential body where concerns matters of global conflict. UK and the US efforts were unable to win the UN security council to the idea of the war early in 2003.

After the failure to secure UN backing, the UK attorney general Lord Goldsmith changed his mind over whether UN support was needed to authorise military action.

Chilcot found that these contortions undermined the UN security council. The report also established that the decision had been made to launch the invasion regardless of UN approval.

In the UK, the case for war rested heavily on the idea that Iraq had significant biological and chemical weapons capacities.

No significant stockpiles or capacity for the building of such ‘weapons of mass destruction’ (WMD) existed. UN weapons inspectors had also failed to find weapons or capacity before they were forced to leave Iraq ahead of the war.

The finding again raises questions over the Blair government’s methods in gathering the intelligence eventually presented in the ‘September Dossier’, later coined the ‘Dodgy Dossier’, on Iraq’s weapons.

7. Peaceful options for disarmament had not been exhausted

Hans Blix was chairman of the UN’s weapons inspection efforts in Iraq, tasked with finding Saddam’s weapons of mass destruction in the months leading up to war.

In his February 2003 report to the UN, Blix said that his inspectors hadn’t discovered any chemical or biological weapons. He later said it was his “firm view” that the invasion of Iraq was illegal.

The Chilcot rReport explicitly states “military action was not the last resort” and that members of the security council were still convinced that options should be explored.

8. Tony Blair “overestimated his ability to influence US decisions on Iraq”

Blair’s government was criticised during the drive to war for being insufficiently independent from the US in foreign policy.

The report found that Blair had already agreed to support US policy in July 2002.

The report found that relations between the UK and the US are "strong enough to bear the weight of honest disagreement" and that the UK’s “unconditional” support for US policy was not necessary.