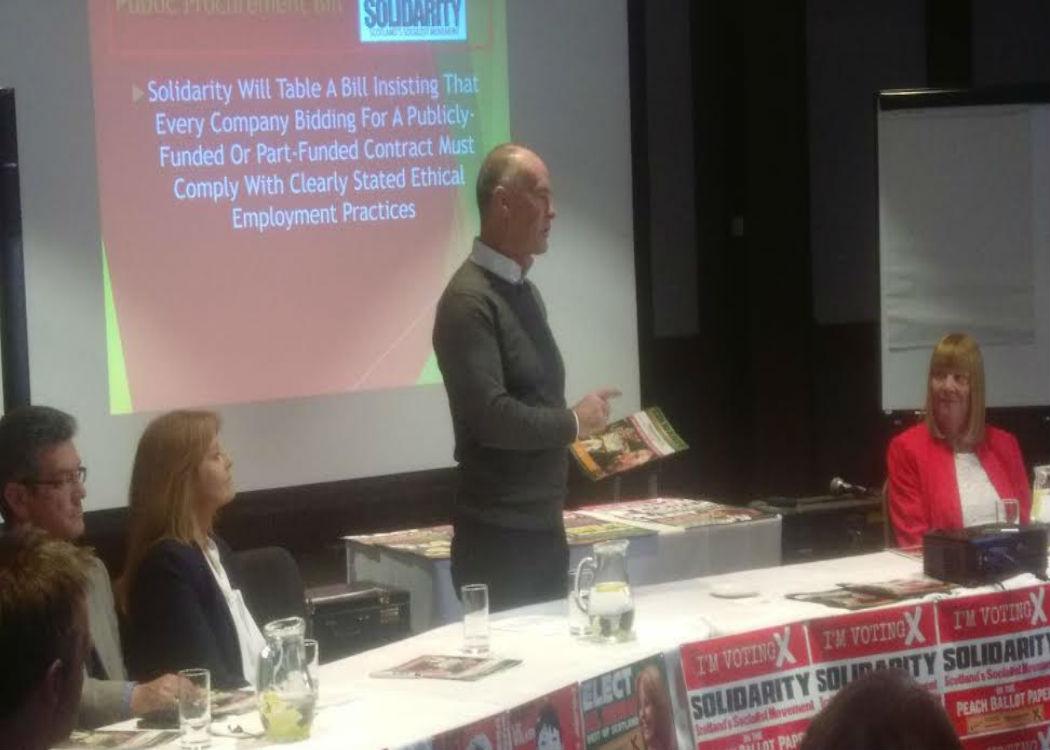 SOLIDARITY has launched it’s 2016 Scottish election manifesto with pedges to hold a second independence referendum in 2018, create a publicly owned pharmaceutical company to supply the NHS with cheap drugs, and to put implace a recall mechanism for MSPs.

CommonSpace looks at 8 key polcies from the Solidarity manifesto

Solidarity’s flagship policy going into the election is a pledge, within three months of the new parliament, to table a bill calling for a second independence referendum to be held in 2018.

That if a Yes vote was achieved, Scotland would become independent by April 6th 2020, 700 years from the Declaration of Arbroath – a document appealing to the Pope in 1320 for Scotland to be recognised as an independent kingdom.

2. “Council of war” to resist austerity

The Solidarity manifesto calls for an alliance to be formed between the Scottish Parliament and Scotland’s 32 local councils to oppose austerity, something Solidarity leader Tommy Sheridan called at the launch a “council of war”.

This would mean local authorities and the Scottish government establishing budgets which exceed the funds they receive from Westminster. Solidarity argues this would put moral pressure on the UK government.

The Solidarity manifesto calls for the Scottish Government to remove permission for the UK military to use Scotland’s roads, land and waters for the deployment of the Trident nuclear weapons system, and opposes Trident renewal.

It calls for a complete ban on fracking and investment in renewable energy.

Solidarity calls for a publicly owned pharmaceutical company to produce and supply inexpensive drugs to the NHS, a move they claim will reduce NHS costs by PS1.4bn per year.

They claim the costs of establishing the company would be recovered within four to five years.

There is no mention in the policy of the potential impacts of clauses within the Transatlantic Trade and Investment Partnership, which if agreed could extend the patent that pharmaceutical giants have on many popular drugs. If agreed, the cheap production of many drugs may be impossible.

The Solidarity manifesto calls for the council tax, a property tax regarded by some as out-moded and regressive, with a Scottish Service Tax – a local income based tax.

Sheridan tabled the service tax policy in the Scottish Parliament in 2006, where it was defeated.

Though the manifesto implies that the policy was founded and introduced by Solidarity, it was infact an SSP policy when Sheridan introduced it to the chamber.

As part of a Democracy Renewal Bill, Solidarity would push for MSP’s to be recalled if 5 per cent of their registered electorate call for it.

There is not detail in that manifesto regarding how potential abuse of this mechanism would be avoided.

7. Cancellation of all existing PPP contracts

The Solidarity manifesto calls for the cancellation of Public Private Partnership all (PPP) contracts.
The contracts, which are still being financed by local authorities across Scotland more than a decade after public buildings were constructed with the use of private firms, have come under renewed scrutiny after 17 PPP schools in Edinburgh had to close due to concerns over their structural integrity.

The manifesto calls the contracts “criminal” and “insane”.

There is no mention in the manifesto of possible legal obstacles faced in cancelling the 80 extant contracts.

Solidarity will campaign for UK exit from the European Union, which it calls a “big bosses club”.
The manifesto states that the EU is “over-inflated, bureaucratic and undemocratic”.