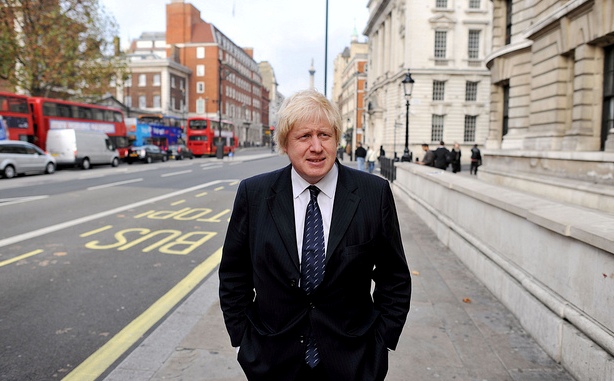 With Boris Johnson under fire for Islamophobic remarks, CommonSpace highlights some of the Tory MP’s most shocking statements

CONSERVATIVE MP Boris Johnson has faced renewed allegations of racism after comparing women in niqabs to “bank robbers” and “letter boxes” – marking the latest in a years-long series of remarks deemed offensive by many.

Writing in the Daily Telegraph on Monday, the former foreign secretary said he opposed Denmark’s new ban on burqas and niqabs in public spaces, but said he believed it was nonetheless “absolutely ridiculous that people should choose to go around looking like letter boxes”.

Johnson said that, if a constituent came to his surgery wearing a burqa or niqab, he would “feel fully entitled to ask her to remove it so that I could talk to her properly”, adding that female students who turn up to school or university “looking like a bank robber” should similarly be asked to uncover their faces.

Anti-racist campaigners and cross-party MPs have denounced Johnson’s remarks as Islamophobic, while the SNP has demanded that Prime Minister Theresa May take action to “root out Tory Islamophobia”.

Tell Mama UK, a charity which campaigns against anti-Muslim hate crime, responded by urging the Conservative Party to issue a statement dissociating themselves from Johnson’s comments and to “stop using Muslim women as a battleground for political battles”.

The organisation tweeted that Johnson’s remarks belie the view that “anti-Muslim bigotry is only at local levels and is few and far between” and that the small minority of Muslim women who wear the niqab report that they “have lost count of the abuse they get”.

The Muslim Council of Britain also accused Johnson of “pandering to the far-right” following his recent meeting with “Donald Trump’s former right-hand man Steve Bannon”, and reiterated its call for an inquiry into Islamophobia in the Conservative Party.

“It’s time this country stopped turning a blind eye to racism out of a lingering sense of class deference,” she added.

Often presented as a gaffe-prone “buffoon”, the Eton and Oxford educated Johnson started his career as an MP in 2001, where he served until his election as Mayor of London in 2008, before returning to parliament in 2015 and being appointed foreign secretary in 2016.

Despite outcry over the appointment, and numerous calls for his resignation during his two-year tenure, Johnson’s departure last month came as a result of internal disagreements over May’s Brexit deal, and not over any of his more controversial views.

CommonSpace takes a look at the history of offensive remarks  which have defined Johnson’s political career.

Commonwealth citizens as “piccaninnies” and “watermelons”

In 2002, Johnson wrote in the Daily Telegraph: “It is said that the Queen has come to love the Commonwealth, partly because it supplies her with regular cheering crowds of flag-waving picaninnies”.

“Picaninnies” is a racist term used to describe black children.

Lest any doubt remain over the imagery being evoked, Johnson added in the same column of then Prime Minister Tony Blair: “They say he is shortly off to the Congo. No doubt the AK47s will fall silent, and the pangas will stop their hacking of human flesh, and the tribal warriors will all break out in watermelon smiles to see the big white chief touch down in his big white British taxpayer-funded bird.”

Despite being an MP at the time of the column’s publication, Johnson didn’t apologise for these comments until he stood for Mayor of London in 2008, when he said he was “very sad that people have been so offended”.

Britain should be “in charge” of Africa again

Also writing in 2002, this time in The Spectator, Johnson suggested a reprise of the British Empire – in the best interests of Africa.

“The problem is not that we were once in charge, but that we are not in charge anymore,” he wrote. “Consider Uganda, pearl of Africa, as an example of the British record. The British planted coffee and cotton and tobacco, and they were broadly right. If left to their own devices, the natives would rely on nothing but the instant carbohydrate gratification of the plantain.”

He added: “The best fate for Africa would be if the old colonial powers, or their citizens, scrambled once again in her direction; on the understanding that this time they will not be asked to feel guilty.”

Writing in the Daily Telegraph again in 2006, Johnson made a comparison between internal party politics and Papua New Guinea – resulting in condemnation from the Papua New Guinea High Commissioner in London.

While Johnson admitted afterwards that he would “add Papua New Guinea to my global itinerary of apology”, he refused to retract his comments entirely, insisting they were inspired by “relatively recent photos” in a Time Life book.

As well as his own offensive statements, Johnson has faced criticism for content which was published by other writers at the Spectator while he was editor.

One particularly racist article stated that “orientals” had “have larger brains and higher IQ scores”, while “blacks are at the other pole”.

When the article was raised by mayoral opponent Ken Livingston during his 2008 campaign, Johnson said he was “sorry for what was previously written as it does not reflect what is in my heart”.

Malaysian women go to university “to find men to marry”

During his time as London Mayor in 2013, Johnson chose the launch of the World Islamic Economic Forum (WIEF) to make a “joke” about women’s equality in  education.

When Malaysian Prime Minister Najib Razak responded to a question on the role of women in Muslim countries by highlighting the increased intake of women into universities in Malaysia, Johnson interjected that they “have got to find men to marry”.

Widely condemned as sexist and offensive by equalities campaigners and political opposition, the remarks were particularly poorly placed in the context of efforts designed to boost gender equality in parts of the world where women have limited economic opportunities.

During the EU referendum campaign in 2016, when then US President Barack Obama spoke out against the UK leaving the EU, Johnson hit back with a column in The Sun which questioned the president’s motives for removing a bust of Winston Churchill from the Oval Office. The sculpture had, in fact, been on loan to President George W Bush.

The remarks called to mind the consistent doubt which was cast over Obama’s birthright as an American citizen by right-wing ideologues including Donald Trump, who led the charge for the president to publish his birth certificate.

However, when asked by BBC Radio 4 if he regretted the remarks the following month, Johnson said “of course not”, and claimed to be quoting a similar point which had been made in The Guardian and elsewhere.

Clearing the “dead bodies” in Libya

In October 2017, while serving as foreign secretary, Johnson said told a fringe event at the Conservative Party conference that Sirte in Libya could be a popular tourist destination of the likes of Dubai with the help of UK business people.

He said: “They literally have a brilliant vision to turn Sirte, with the help of the municipality of Sirte, to turn it into the next Dubai. The only thing they’ve got to do is clear the dead bodies away and then they’ll be there.”

Cross-party calls for Johnson’s resignation from the cabinet resounded – including from those within his own party, while the Lybian parliament demanded a formal apology. The foreign secretary, however, responded by accusing opposition MPs of “political point-scoring”, and he was allowed to remain in post.

Prime Minister Theresa May has thus far remained silent on Johnson’s comments this week – marking just the latest in a trend of an apparently endless supply of forgiveness for an MP who has never been shy about criticising her leadership.

One Tory MP, Heidi Allen, distanced herself from Johnson’s words, tweeting an article accusing him of “Islamophobia” and commenting: “About as suitable to be PM as he was Foreign Secretary.”

In contrast, fellow MP Nadine Dorries said that “any clothing a woman is forced to wear which hides both her beauty and her bruises should be banned and have no place in our liberal, progressive country”.

The question remains, how far must Johnson and others within the Conservative Party go in perpetuating racist and xenophobic sentiments before action is taken by the party’s leadership – or will such views remain tacitly endorsed by silence?