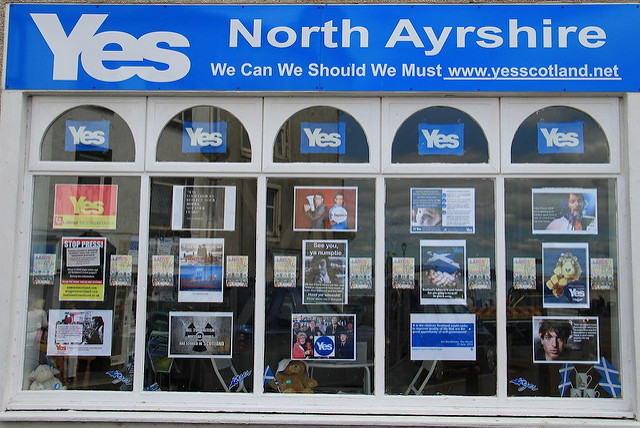 Jason Baird, National Yes Registry: “That march was a wee taster of the real power of the Yes movement; it’s the bringing of normal people into an abnormal situation – a movement – which really energises things”

GRASSROOTS independence campaigners across Scotland have told CommonSpace that they have been energised by the march for independence last Saturday, and believe the size and make-up of the demonstration has given the cause new momentum.

Organisers of the All Under One Banner independence march estimate over 60,000 attended the demonstration, which would make it the largest in Glasgow since the 2003 march against the Iraq war.

The huge turnout comes one month before an SNP conference in Aberdeen, where the issue of the timing of a future independence referendum is likely to be a hot topic.

William Duguid, from Yes Perth City and Common Weal Perth & Kinross, told CommonSpace that 43 people went on the bus the local group organised from Perth to Glasgow and many more in cars, and that the march was “just what the doctor ordered”.

“Something to light a crate of fireworks in the vicinity of the SNP Spring Conference to show them we’re ready,” Duguid stated.  “A spectacularly higher turnout than in 2017 – we’re not particularly worried about precise numbers – and after months of frustration, a massive and possibly game-changing morale boost for the Yes movement.”

Duguid said that one of the reasons he believe the demonstration was significantly bigger than 2017 was that new Yes groups have “sprung or strengthened since then and they undoubtedly played their part in getting more people to attend”, but also that the march was an outpouring of frustration that has “been building up in recent months”.

“People have been waiting for the opportunity to show support for independence,” he said. “Frustration’s been building up in recent months as the media spin seems to have become more intense, particularly in the written press.”

This sentiment was shared by Jason Baird, organiser of the National Yes Registry which seeks to act as a co-ordinating point for grassroots Yes groups, who said that the march was a “reaffirmation” of the importance of campaigning over relying on the media for “visibility”.

“If there was just 15 or 20,000 there at the march I think we would all have fallen for the media narrative that nobody’s interested, that we were small, and that nothing was happening. But the size of it shows that’s not true; the media can’t subdue an atmosphere like that.

“I think we are feeling more upbeat [after the demonstration], but more than that for us activists it’s a timely reminder of the role of the media in terms of the independence movement. I was speaking to someone in Stirling a couple of days afterwards who didn’t know the march had happened. In a small country like Scotland that number of people on a march should be a huge thing, but because the media don’t treat it like that people don’t know it happened.

“And that’s a reminder of the importance of campaigning to get the message out, because the media won’t give us that visibility – we need to pop that bubble ourselves.

“I’m one of the hardcore activists but even I get demoralised by the media because it has a lot of power to subdue things. If you are in a Yes group of four or five people in a No voting area you can end up feeling isolated by your environment and by the media, but if you are on that march and if you are connected to 150 other groups, you know your part of something really big.”

Baird is currently organising The Gathering, an event to bring together grassroots organisers of independence to better co-ordinate their work, on May 27, and he said that the march had given them new momentum, as it “was a wee taster” of what happens when the Yes movement is energised by an influx of “normal people”, like in 2014.

“The Gathering is focused on the organisers of the Yes groups but even then we’ve had lots more people wanting to get involved since the march. Because a march is a one day thing, but what we’re trying to do with the Gathering is to sustain grassroots political activity.

“That was the special thing about 2014: all us hardcore activists were just there to provide John or Sheila – who don’t usually bother with politics but were motivated because they knew it could actually make a difference – with a couple of arguments, a wristband and a leaflet, and they’ll convince their workers or the people they know at the pub. We were just there to make it more efficient for the normal people to do the convincing.

“After 2014, the normal folk fell away and it became the hardcore again. But that march was a wee taster of the real power of the Yes movement; it’s the bringing of normal people into an abnormal situation – a movement – which really energises things.”

The prospect of another independence referendum was heightened in April 2017 when First Minister Nicola Sturgeon won the support of the Scottish Parliament to seek a section 30 order from the UK Government to hold one, but after the result of the snap General Election in June – where the SNP surprisingly ended up with just a majority of one in Scotland over the No-supporting parties – the SNP leader announced that she was not seeking a section 30 order until the terms of Brexit were clearer.

Since then Theresa May’s fragile Cabinet has still not come up with a clear set of proposals for Brexit, but has stated unequivocally that the UK would be leaving the EU Single Market and is locked in deadlock with the Scottish Government over whether powers from Brussels will be returned to Holyrood or controlled from Westminster.

READ MORE – Robin McAlpine: We must start a campaign now – or accept that it isn’t going to happen

The uncertainty over Sturgeon’s position has led to a renewed debate about the timing of a referendum within the SNP and the broader independence movement, and Duguid said he considered the march to have a “general feeling…that we should go for independence sooner rather than later”, but said in the Perth Yes group “we do still have differing views on the timing”.

“However,” he added. “There’s a pretty strong consensus that, whatever the chosen timing, the naming of a date is very important.  For the dyed-in-the-wool activists, campaigning will go on irrespective of that – just as it has been doing – but to attract the really significant influx of support that may turn the campaign in our favour, we think there needs to be a date.”

Stuart Bates, South Ayrshire Common Weal and local Yes group activist, said that the important thing coming out of the march was that “we need a proper independence campaign”.

“I don’t think anyone thinks we need a referendum tomorrow,” he said. “But we need a proper independence campaign, not run by the SNP, and it needs to be about democracy, including local democracy – about people taking power themselves.”

Bates said the march had given activists a lift, but that there had been no panic among independence activists who engage with the public on a regular basis anyway.

“It was absolutely brilliant, it does give you a boost. But we know ourselves from speaking to people on the street that independence support is solid, and I think maybe growing.

“I think the level of understanding out there has actually stayed high since 2014 – people do have an understanding of what’s going on, they’ve continued talking and debating,” he said.