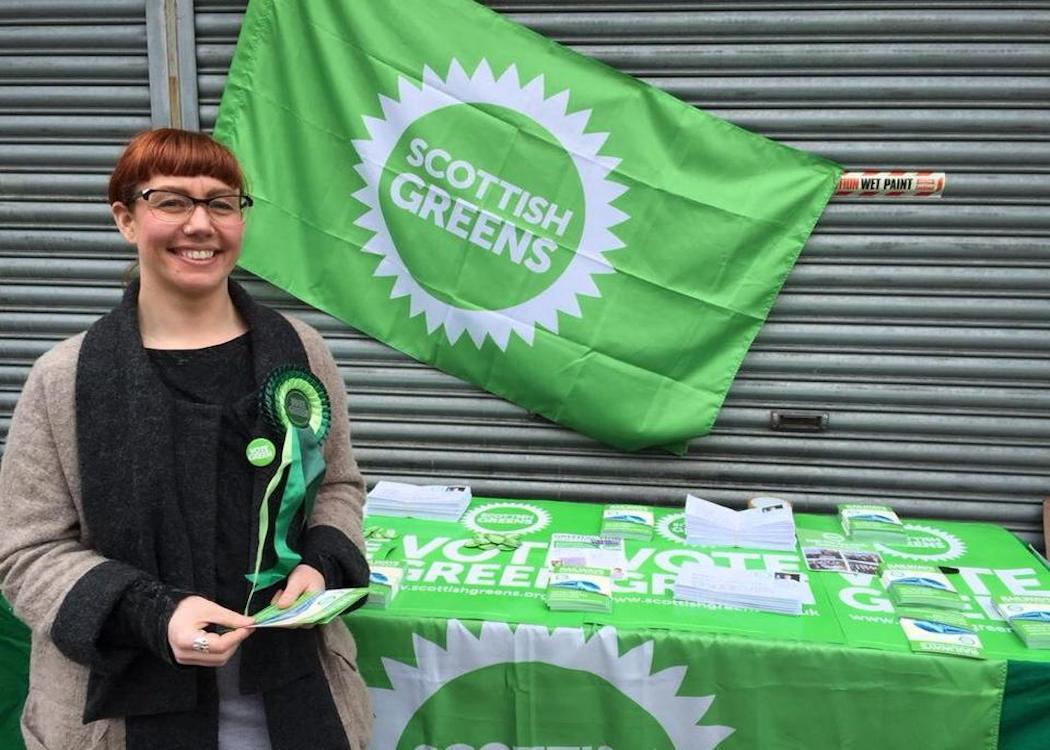 With under a month until the Scottish Parliament elections, CommonSpace have interviewed some of the leading candidates in Glasgow’s competitive list-election. Our first candidate is Zara Kitson from the Scottish Green Party.

SCOTLAND’S LARGEST city has always had its green spots.

In the cities elections, green metaphors are a little harder to find. Dominated by Labour, and more recently the SNP, the Scottish Greens have faced a challenge to find mainstream relevance on the crowded left-field of the city’s politics.

For 13 years, since his first success on the list-election, Patrick Harvie has been the figurehead for Glasgow Greens. Now – following its post-referendum boost in party membership – the party is hopeful that it can double its contingent come May.

The candidate who would benefit is Zara Kitson, a thirty year old campaigner and former public policy student. She’s hopeful and on message.

“I’m feeling very excited for the next few months and the challenge for the party beyond that,” Kitson explains.

“I’m excited about what that might mean for Scotland, a fair Scotland with a bolder Holyrood having voices like mine – hopefully – in there representing the people of Glasgow.”

“I think we have a really strong chance of delivering that [electing 2 MSPs]. We’ve now got a solid foundation of membership and we’ve got resources greater than we’ve ever had. So we’re in the right place to hopefully deliver and actually get the kind of ideas we were presenting today – that Scotland can have homes for all, Scotland can provide more jobs, Scotland can care for our people.”

The list elections across Scotland are the most unpredictable in this May’s election. 56 MSPs are elected through seven regions. Traditionally, as a form of proportional representation, they are the best opportunity for smaller parties to win seats. In 2003 the Greens won seven list seats, while the SSP won six.

“We brought about the moratorium on fracking. We’ve persuaded the Scottish Government to take rent hikes seriously. We’ve introduced things around land reform, land rights and within the community empowerment bill.” Zara Kitson

With the SNP favourites to repeat its constituency seat clean sweep of the 2015 general election, Labour are well placed to perform well on the list election by claiming three or four of the MSP slots.

Beyond the top Labour candidates – Anas Sarwar and Johann Lamont – all other candidates will be in a state of uncertainty right up until the final votes are tallied through the complicated ‘Additional Members’ system.

Kitson is hopeful that the Green message will break through: “It’s a very squeezed list in Glasgow, but I think the Greens have something credible to offer. We’ve seen Patrick deliver time and time again in parliament.

“We brought about the moratorium on fracking. We’ve persuaded the Scottish Government to take rent hikes seriously. We’ve introduced things around land reform, land rights and within the community empowerment bill.”

But the Greens, with its pro-independence leftwing populism, faces more direct competition in May from the SNP and new socialist coalition Rise – who claim to be more competent or more authentic than the Green Party.

In Kitson’s case – as for so many other candidates who worked together during the independence referendum – it’s personal.

Rhiannon Spear, who would be the SNP’s top candidate if the party wins the constituency seats, also places herself on the pro-reform side of politics.

Over the referendum, all three were in the same campaign, at the same events, socialising among the same politically activated groups of young Glasgow activists.

Despite their new status as rivals, does Kitson still maintain an affinity for those she worked alongside?

A few hundred votes either way could make or break the chances of any out the nine main list candidates in contention.

With the complicated voting system, that’s not necessarily the case. All three could, in certain circumstance, be elected.

“If they [the people] make that decision then that’s great,” Kitson adds. “I would definitely work alongside those people. Greens have got a record of working alongside anyone who shares a policy platform with us.”

Undeniably, for the next three weeks, they will be in direct competition – each operating to different, difficult thresholds.

For Kitson, the Greens are chasing around 10 per cent in the list vote to win two seats. The SNP, if they win all nine constituency seats, would need around 50 per cent on the list vote for Spear to have a chance. Rise, not even a year old, a breakthrough for its first elected politician would require around 6 per cent of the vote.

Yet while the Greens currently feel confident – with the latest poll predicting as many as 11 total elected MSPs – the margin of error in polls could yet harbour a false dawn.

A few hundred votes either way could make or break the chances of any out the nine main list candidates in contention.

“We’re not about mudslinging, and I think we’ve proven that during our time in the parliament. That’s where we hope to bring the voice of a credible opposition the likes of Labour just hasn’t been able to bring,” she says.

“Rise are very much just on a starting foot and the Green party has been building for years in Scotland. We’ve always had a MSPs in parliament. That’s a credibility and an experience that we can bring that puts us on a footing with the ability to deliver.”

At the Green party’s Spring conference, co-convener Patrick Harvie was harsher, stating that Rise weren’t “even registering on opinion polls” and that it “puzzles [him] why the Scottish Socialist Party folded themselves in with a brand name that no one has ever heard of.”

Yet while the Greens currently feel confident – with the latest poll predicting as many as 11 total elected MSPs – the margin of error in polls could yet harbour a false dawn.

In 2011, despite hopes of such a breakthrough, the party stuttered – remaining on a static two seats.

Yet now, with a quadrupled membership and parity on major election media events, the party claims this year won’t be a repeat.

Kitson at least represents an enthusiasm for a more equal society: “I’m not just chapping the door [when canvassing] as a women in a suit. I’m from an ex-mining community. I’m from a place where people aren’t used to having a voice, and issues around gender equality, democracy, representation, poverty, inequality are all very real to me in my lived experience.”

Whether that enthusiasm is enough to win over the list-voters of Glasgow will be determined in just 24 days time.