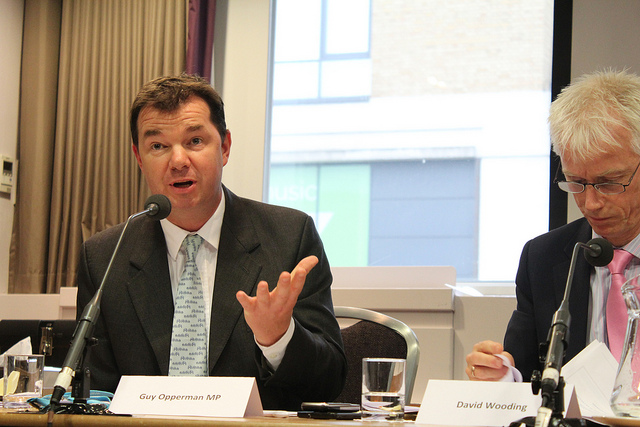 TORY WORK AND PENSIONS minister Guy Opperman faces the ire of Women Against State Pension Inequality (Waspi) campaigners after he dismissed calls for transitional arrangements to support 1950s women impacted by inadequate notice and information on the state pension age increase during a backbench debate in the House of Commons.

Campaigners who viewed  the debate from the public gallery walked out during Opperman’s speech, shouting “shame on you”, while Waspi groups across Scotland have joined the chorus speaking out against the minister’s remarks.

Opperman responded to the motion – which was proposed by Labour MP Grahame Morris and received cross-party support, including a number of Tory backbenchers – by saying that full compensation would cost over £77bn.

He added: “These changes would require new legislation, which could mean an inequality potentially being created between men and women.”

While the Waspi campaign is clear that it does not oppose the principle of raising the pension age, Opperman highlighted the need for a higher pension in light of rising life expectancy, which he said would otherwise leave the government with no choice but to reduce pension payments and risk increasing poverty among pensioners.

Glasgow and Lanarkshire’s Waspi group, which is one of 140 groups across the country, watched the debate together live on Thursday and set up what they described as a “cliché bingo” of excuses given by the UK Government in the last 13 debates on the subject.

Rosemary Dickson, co-coordinator of the group, told CommonSpace: “Unfortunately we all had full houses as Guy Opperman spoke – his response was as always, as he employs a broken record technique.

“For example, ‘no-one has waited longer than 18 months’, ‘we are all living longer’ and that ‘we were all notified’ – all of which have been proven as incorrect. His response was almost word for word of those in the last backbench debate raised by the SNP last month and also from the government’s response in the Lords the previous day.”

That being said, Dickson said the group were “gratified” by the cross-party support shown for this issue to be resolved by the government. “We owe a huge debt of gratitude to those who spoke on our behalf at the debate – one of whom actually sang in the chamber! Namely Chris Stephens, Mhairi Black, Hugh Gaffney, Paul Sweeney, Ged Killen, amongst others.”

Carole Archibald of the Dundee Waspi group echoed these sentiments, calling it a “great day for Waspi”, in which “MP after MP gave speeches on how unfairly we have been treated”.

However, she explained, the women who had travelled from all over the UK to attend the debate were frustrated by Opperman’s “patronising and dismissive words”.

“Guy Opperman brought nothing new to the debate; just the same Tory contempt he has shown all along, with the same excuses, even claiming conceding to our demands would bring about inequality,” she said.

“He consistently misses the point of the Waspi Campaign. We are not against equality in the State Pension age. We are campaigning about the lack of notice we were given.

“In a lot of cases women have been given one year’s notice of a six-year hike in their Pension Age; most men have received six years notice of a one year increase. How is that fair? How is that equal?

“He turned his back on us so we turned our backs on him. We are very angry at the way we have been treated and we are not going to go away.”

Almost 3.5m women across the UK born in the 1950s have been affected by the changes, and campaigners argue that poor handling of the policy change, amounting to maladministration, has resulted in financial hardship which could have been prevented.

Ann Fraser, coordinator of Ayrshire Waspi said the debate made clear that “government is still not listening” and that Opperman is “reading from the same script at every debate”.

“Waspi women do not understand and are in fact at a loss as to why the government will not even consider ideas to resolve this situation even from their own backbenchers,” Fraser said.

“Waspi women did not create this problem. It was DWP who failed to write to women regarding the 1995 Pension Act.  Then the government brought in the 2011 Pension Act resulting in women having to wait in most cases an extra six years for their state pension not 18 months as the government states.

“Waspi agree with equalisation but the changes were too rapid due to women not being informed of pension changes. We are asking the government for transitional payments and compensation.”

The Waspi campaign is also engaged in a maladministration case against the Department of Work and Pensions (DWP) for their handling of the changes, which has recently received a welcome intervention from the Parliamentary and Health Service Ombudsman to speed up the process after complaints of significant delays.

Jill Glover of Dumfries and Galloway Waspi also responded with damning comments on Thursday’s debate: “Theresa May’s government again showed themselves to be without honour, decency and integrity.

“Guy Opperman consistently talks about issues of raising pension ages – which have nothing to do with the Waspi campaign – instead of addressing the injustice done to these women.

“Talk about men are from Mars and women are from Venus – I don’t think he’s even in the same time warp as the rest of us.”