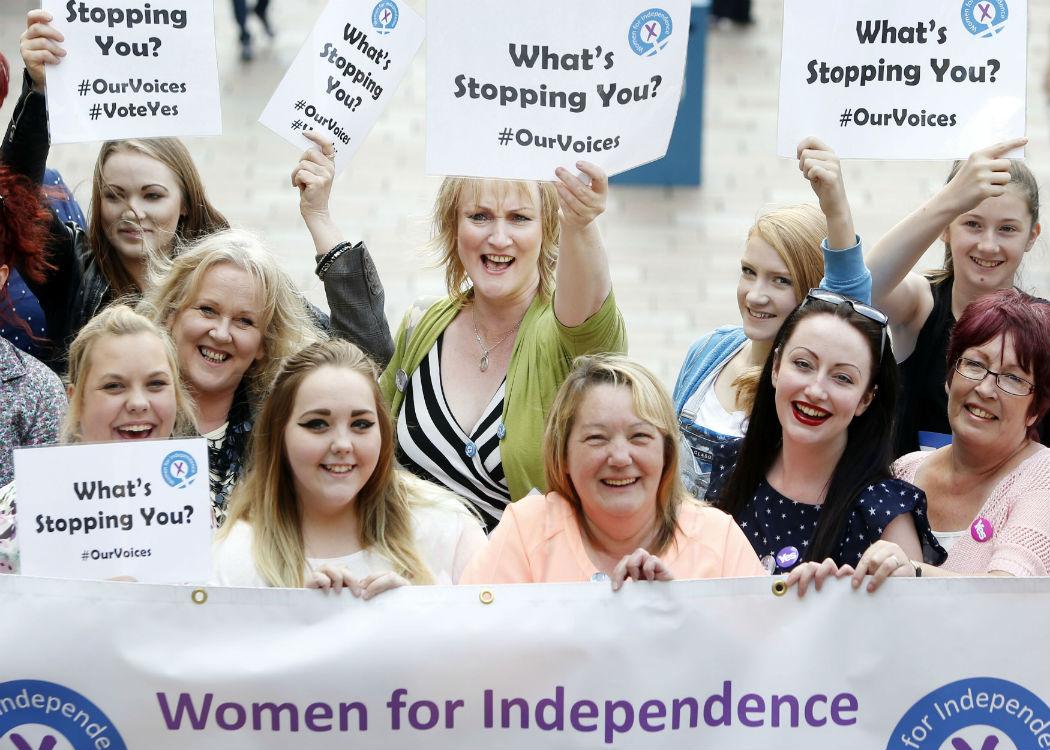 Ben Wray speaks to campaigners about their recent victories in scrapping the planned ‘super-prison’ and winning a fracking moratorium, and asks whether the independence movement has changed the dynamic between campaigns and politicians in Scotland

GRASSROOTS campaigns are winning in Scotland, and are defeating powerful rivals.

The victory in the Scottish Parliament on 28 January, when Fergus Ewing, the Energy Minister, declared a moratorium on fracking at least until powers over onshore gas extraction are devolved to Scotland under the Smith Agreement, was a remarkable defeat of powerful vested interests.

Ineos, who had bought the license rights for onshore gas extraction around its chemicals plant in Grangemouth, was furious, describing the move as something akin to “heading for a cliff edge in energy supply”.

The Duke of Buccleuch was none too happy either; in Canonbie, Dumfries, the Duke had a site planned for extracting coal bed methane, but such plans will be scrapped now.

It is unlikely that Ewing’s decision to introduce a fracking moratorium was self-motivated. In recent leaked letters between Ewing and Joan McAlpine, SNP MSP in the Canonbie area, Ewing lambasted McAlpine for speaking out at a local meeting in opposition to the Duke’s development, after the Duke’s chief executive sent Ewing a personal letter of complaint.

Ewing wrote back to the Duke, agreeing with him that there was an “opportunity to create employment and economic development through unconventional activities within the Canonbie area”.

It’s clear that for the likes of Fergus Ewing, the Duke of Buccleuch and Ineos, a fracking moratorium is not what they had in mind. Campaigners defeated the rich and powerful.

Gillian Wales, organiser of the Radical Independence Campaign’s anti-fracking conference this weekend, tells CommonSpace that “the credit for the fracking moratorium has to go to the community campaigns that have been campaigning on this for over two years”.

Campaigners defeated the rich and powerful.

In Scotland, Scottish Labour came out against fracking, stating almost a week before Ewing’s announcement that it was time for the energy companies to “frack off”. There’s nothing in Murphy’s past at Westminster which would hint at an anti-fracking position. Indeed, Murphy’s new chief of staff, John Mcternan, tweeted earlier this year that he had “quite happy” with fracking, arguing for “an end to the ridiculous fetish of offshore wind”.

Therefore, explanation of fracking’s demise in Scotland must seek to look beyond the normal relationships between campaigns and politicians. Something’s changed.

Mike Small, editor of the Bella Caledonia media website, wrote after the victory against fracking: “In the post-indyref phase the reality that there’s still a live, vibrant, fully-networked movement out there communicating and mobilising terrifies politicians.”

Small believes the referendum campaign has fundamentally shifted the balance of forces between state and citizenry.

“The British State can only operate successfully if it has a passive mass of people too cynical or befuddled to organise,” Small tells CommonSpace.

“After the referendum there is now a focused (if undirected) mass of highly networked, agitated people intent on holding power to account. A people who are moving swiftly from being good British subjects to active Scottish citizens. Power has shifted and utilitarian functionary politicians used to operating from focus groups and triangulation don’t have a clue how to respond. The fracking victory is a classic recent example of that.”

Wales agrees, admitting that she was “surprised” by the speed in which the fracking moratorium was won in Scotland. Wales and others plan to deepen and strengthen anti-fracking campaign networks at this weekend’s conference, to ensure politicians ban fracking completely.

“I think the balance has shifted where politicians feel under more pressure to listen to grassroots campaigns,” Wales says. “It is a good time to campaign.”

Wales is quick to add that wider factors, like falling oil prices and the proximity of this year’s General Election, must also be taken into account when understanding the recent anti-fracking victory, but she does not doubt that the dynamic between social movements and official politics has undergone a more permanent shift.

“The British State can only operate successfully if it has a passive mass of people too cynical or befuddled to organise,” Small tells CommonSpace.

The cynical would point to a General Election in three months’ time where no seat appears to be safe and every vote may make the difference, and put any unusually high sensitivity of politicians to campaigners’ demands down to that.

How, then, would that explain the decision to scrap the new women’s super-prison?

The planned ‘HMP Inverclyde’ in Greenock was scrapped last week after campaigning pressure from Women for Independence (Wfi), as well as, belatedly, Scottish Labour, on the basis that women’s rehabilitation will be improved through community sentencing rather than incarceration. The decision overturns decades of penal reform sliding to the authoritarian right, with an increasingly draconian approach to sentencing and incarceration despite consistent evidence that prisons – with enormous overcrowding in the prison system at a huge cost to the taxpayer to boot – don’t work.

The most consistent pressure upon politicians has been public opinion, as polls have shown consistent majorities in favour of incarcerating offenders. In the 1990s, crime topped opinion polls in voter priorities. William Hague delivered a famous line in his thick Yorkshire accent: “People are being burgled!” Blair responded with a typically ‘third way’ approach to the issue: “Tackling crime, and tackling the causes of crime.” Under Blair’s Labour government the number of people in prisons rose, as crime fell. Since the SNP came to power in 2007, prison numbers in Scotland have risen to record numbers with serious overcrowding in many Scottish prisons.

No one could argue that Labour or the SNP have taken a gallant, principled stand in the face of public opinion in this approach. So what explains the SNP and Labour’s scrapping of HMP Inverclyde?

Kathleen Caskie, Women for Independence co-ordinator, says: “One of the things that has made a difference is the rise of social media; it has brought campaigners and politicians much closer together. The referendum campaign really taught a generation of people about how to use the digital media, and I think that’s been huge.”

Undoubtedly, the Angiolini report, which argued strongly against imprisoning more women in Scotland, was a strong weight on the SNP’s decision to reverse its decision, since it was commissioned by the Scottish Government. It’s difficult for governments to oppose their own advice. Caskie believes that, in this context, the grassroots campaign helped provide the government with the public pressure to get the decision through.

“Our campaign made it easier for the Scottish Government to take the decision, there’s no doubt about that,” Caskie states.

Another pressure, beyond the rights and wrongs of penal reform, undoubtedly impacted upon the decision to scrap the proposed super-prison: the rise of women’s politics. The independence referendum saw a vast women’s movement develop, and the campaigning group Women for Independence was a galvanising vehicle for thousands of women.

“It was a self-journey,” Caskie says, “where women who previously didn’t think politics was for them became heavily politicised, and they realised they were activists and they enjoyed it – and I think that’s what has continued after the referendum.”

One thousand women attended a WfI conference just over two weeks after the independence referendum, the biggest women’s conference in Scotland for decades.

Nicola Sturgeon has since announced a gender balanced Scottish Government cabinet for the first time ever, and she was quickly followed by Jim Murphy, who made his first Scottish Labour shadow cabinet a 50/50 gender split

Caskie believes the “old certainties” of politics have fallen apart for Scottish politicians.

“They have to take campaigns like WfI seriously now, because politicians know we’ve got a voice, and they know we can use digital media to get that voice out there.”

“In terms of women’s politics, there hasn’t been a political women’s movement in Scotland like Women for Independence since the suffragettes,” Caskie argues.

Since the scrapping of the women’s prison, WfI has launched a General Election campaign called ‘Send Off Sexism’ which is trying to rid Scottish politics – on the Yes and No side – of sexist attitudes towards female candidates. The group’s ‘pledge’ for politicians to sign includes all parties insisting on gender balanced panels and a no tolerance policy towards sexist abuse/behaviour.

In the space of a few days, Wfi received the public support of both Nicola Sturgeon, Jim Murphy and Patrick Harvie.

“In terms of women’s politics, there hasn’t been a political women’s movement in Scotland like Women for Independence since the suffragettes,” Caskie argues. “Of course, there’s always been women’s campaigns and organisations doing really good and important work, but a grassroots political movement that can take sides on issues and have a huge community of people behind it? There’s not been one like Wfi.

“Those of us who have been in politics for a long time have been amazed by the commitment of women to Wfi.,” she adds.

The referendum also saw a revival of grassroots campaigning in communities that have not seen active politics since the anti-poll tax campaign.

Jonathon Shafi is co-founder of the Radical Independence Campaign, which organised thousands of people in ‘mass canvasses’, targeting working class communities to register voters and make the radical Yes case. Shafi believes the return of grassroots politics to Scotland has shaken politicians out of their comfort zone.

“The referendum process engaged an enormous section of Scottish society, including huge numbers of people who had been previously alienated from politics,” Shafi says. “Now that so many people are tuned in to social, economic and political issues, the politicians have to be quicker on their feet.

“Formal politics is no longer the sole purview of the politicos and the corporations, but a general interest among an engaged citizenry. Even the SNP, despite their surge in membership, is not immune to this.

“The essence of the independence movement was social change, and as the months and years pass, any political party that fails to match this aspiration is on a slippery slope,” Shafi adds.

What next? The Scottish Government’s proposals for radical land reform directly target some of the most entrenched vested interests in Scottish society; the lairds who have owned Scotland’s land for hundreds of years. The Tories have joined the lobby group Scottish Landowners & Estates in a rear guard action to protect the wealth and property of some of Scotland’s richest landowners, but they too face the renewed vigour of the progressive grassroots movement.

A conference was held on 24 January by land reform campaigners, and the Scottish Land Action Movement (Slam) has been launched to push the reforms through, and argue for more radical changes. Already, Scottish Labour have committed to supporting the Scottish Government’s proposals.

Returning the land to the people may be yet another legacy of Scotland’s independence campaign, and yet another defeat of the professional lobbyists and their big business friends.