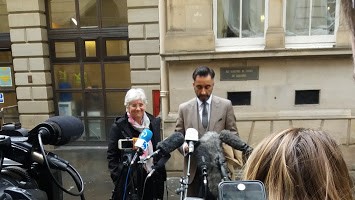 FORMER CATALAN MINISTER Clara Ponsati has been released on bail, following her appearance at the Edinburgh Sheriff Court in response to a warrant from the Spanish Government, seeking her extradition on charges of rebellion and misappropriation of public funds.

In anticipation of Ponsati’s appearance for her initial extradition hearing, hundreds of demonstrators gathered outside of the Sheriff Court building to express their solidarity with the former education minister, who has being held responsible by the Spanish Government for violence at polling stations during the Catalan independence referendum of 1 October, 2017.

Following the hearing, it was announced that Ponsati would be released on bail, with a preliminary hearing on her case set for 12 April, and a full hearing to take place on 18 April.

“The only people that should be held responsible for the brutal violence was the Spanish police and the 6000 state security forces who attacked the Catalan people on behalf of the Spanish Government.” Lawyer Aamer Anwar

“The 52-page warrant included the crimes of rebellion, punishable by up to 25 years in prison, as well as the crime of misappropriation of public funds, punishable with up to eight years’ imprisonment.

Anwar continued: “Clara wishes for me to state that these charges are a politically motivated, and a grotesque distortion of the truth. She cannot believe that she is being held responsible for the violence that took place on the day of the referendum.

“She submits that Spain has not followed due process, cannot guarantee the independence of the judiciary, and has repeatedly abused the human rights of the Catalan people. As proceedings are live, we will not go into the details of the defence.

READ MORE: ‘Scotland has been a true friend to Catalonia’: Clara Ponsati placed under arrest

Addressing the day’s events, Anwar said: “Clara is pleased that bail was granted by the Scottish courts, and grateful for the respect and the dignity she was given by Police Scotland and the Scottish court service. A hearing has been set for the 12th of April. Please note that this will not be a full hearing.

“The last few days have been difficult, and Clara knows that there is a long road ahead, but she is truly humbled by the hundreds of thousands who have supported her [and] contributed to the legal fund, and also wishes to thank the Scottish Government. Scotland, you have been true friends to people of Catalonia in their darkest hours.

“Clara respects the fact that her fate now lies in the hands of Scotland’s independent judicial system. This is what should happen in a democracy.”

Amongst those who gathered to express their support for Ponsati were several MSPs, including Kate Forbes, Ivan McKee and Sandra White, as well as former SNP MP George Kerevan, numerous Scottish independence campaigners, representatives of ANC Scotland, and several Scottish Labour activists.

“This is what should happen in a democracy.” Lawyer Aamer Anwar

Prior to hearing, Sandra White told CommonSpace said: “I am optimistic. I put my faith the court of law, Scottish law in particular, and human rights issues, and I think that’s obviously what the lawyer Aamer Anwar and the QCs are fighting about. So I am optimistic that the law will be upheld in favour of Clara.

“I think you have to look at the will of the people; if the courts have said that they cannot extradite Clara, then I believe there will be further new information coming out from the Scottish Government.

Asked what she felt the Scottish Government’s next step should be if extradition were to take place, White said: “Their next step, I would assume, would be once again to contact the Spanish Government, to contact the EU, and make their position very, very clear – that they do not uphold this situation where Clara has to be extradited.”

Uriel Roig, coordinator of ANC Scotland, the Scottish branch of the Catalan National Assembly (ANC), told CommonSpace following the announcement of Ponsati’s release on bail: “We are glad she has been released, of course. And as well, let me thank everyone that came to support her – there were a lot of Catalans, but also a lot of Scots.

“She still has to appear in court in mid-April, but for now it’s going well.”

Asked if ANC Scotland had been coordinating with any other sympathetic groups on further solidarity actions in defence of Ponsati, such as the Catalan Defence Committee (CDC) Scotland, Roig answered: “As ANC, we are members of the Catalan Defence Committee – which has members all over Scotland, the lawyer [Aamer Anwar] being one of them, as well as MSPs from different parties.

“The only place right now the CDC is working as group right now is in Glasgow. So right now, I encourage people all around Scotland to organise their CDCs.”