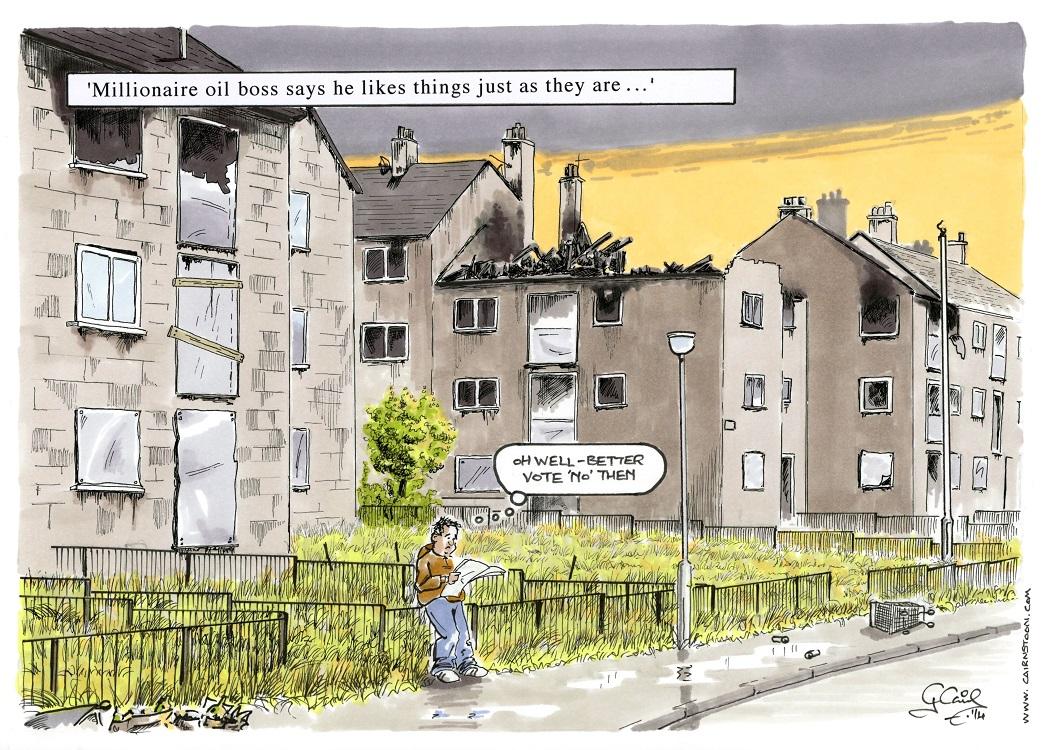 Wings Over Scotland cartoonist Chris Cairns on his new book, the difference between Yes and No cartoonists and online opportunities

“IF you go online you will see an explosion of cartoons, it’s the perfect place for the medium,” cartoonist Chris Cairns says.

He’s confident about the future of an art form, cartoon political satire, that seemed in dire straits just a few years ago. Aren’t cartoons a bit passe?

“No. I think they are in the traditional media because they have struggled with the restriction of space within newspapers and magazines. An editorial cartoon takes up huge space.”

Cairns – well known for his contributions to Wings Over Scotland – whose new book of cartoons, ‘Welcome to Cairnstoon’, launches on Monday 26 October in Glasgow, might have good reason to feel that the cartoon business is buoyant. But he still commiserates the print media where his career began, as a journalist for the Scotsman “before it was in the state it is just now”.

“The Sunday herald is a Sunday newspaper that doesn’t have an editorial cartoon, that would once have been unheard of,” he says.

The future of cartoons, then, is very much online: “Cartoons are visual, they are impactful and immediate; this is what people are looking for on the internet. Funding it, of course, is a different matter.”

Working on the self-published new volume with another pro-independence satirical cartoonist and publisher, Greg Moodie , Cairns has resorted to that pillar of new media, the crowdfunder, for seed capital.

Remuneration must be a chief concern of Cairns because, as he brashly intimates, it’s his artistic inspiration: “I’m essentially very lazy. Technically I’m a professional artist but I’ve never felt myself to be. I work when I have to, when I’m commissioned. So my style has developed the more I have worked.

“You’ll see in the book my style has evolved over time. Every now and again Stuart Campbell [Wings Over Scotland editor] will ask for one, but usually it comes out once a week on a Saturday.

“But I’ve also started looking at other people’s cartoons and borrowed wee things. I worry sometimes that I’m all over the place stylistically, but people tell me there is a thread, that they can tell one of mine straight away.”

Cairns speaks about his art in such a briskly unpretentious way that it evokes the referendum campaign, when everything was ‘have a go’ and zealously amateur. In those days, drawing for pro-independence blog Wings Over Scotland, he was part of a coterie of new artistic talent, his colleague Moodie among them.

But why didn’t the No campaign produce the same artistic output?

“From the Yes side of things it’s easy to be satirical, an insurgency. Off the top of my head I can’t think of any equivalent on the No side, any of that emerging satirical artistic impulse.

“When they [No campaign] tried to come up with an artistic movement it was kind of sad, panto actors and C-list celebrities, holding placards and looking nervous.”

Cairns’ signature cartoon character, Hamish the Lion, emerged from a recollection he has of another lion cartoon. The ‘fearty lion’ of Jim Turnbull represented the timid and supine Scotland of the 1979 devolution referendum.

Cairns says his lion represents a different Scotland, a more confident Scotland; a “chubby” lion. But why do cartoonists use these avatars? John Bull? The Russian bear, the American eagle; isn’t it all a bit philistine?

“I can only speak for cartoonists. We can’t go into long stories; we need that immediate, humorous recognition,” Cairns says.

“The amount of time people spend on a cartoon is seconds, you need to get your message across in seconds.

“There are cartoonists who are so dense, they invite you to spend time looking at their work, it’s very brave. A couple of cartoonists come to mind, one is Greg Moodie the other is Martin Rowson.

“Sometimes people tell me they do that with my cartoons stare at them and find meanings. But mine aren’t like that, the message is straight between the eyes and then move on.”

So what does our Spartan, “between the eyes” cartoonist want from his first book of cartoons?

“To turn a profit,” Cairns laughs.

“Its deliberately volume one as well, and my main hope is that it will be a platform for a volume two.”

‘Welcome to Cairnstoon’ will launch at Leiper Fine Art in Glasgow on 26 October from 6pm-9pm, and Free Space Gallery in Edinburgh on 29 October from 5.30pm-8pm.

The paperback book is available for PS20 and hardback for PS30. They will be available to order online soon from cairnstoon.com