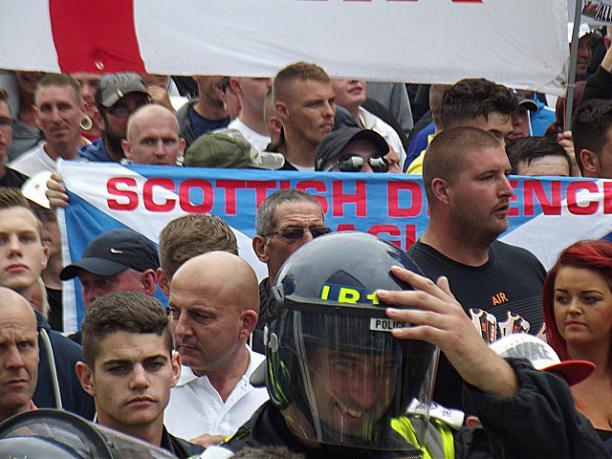 THE RECENT PUBLICATION of ‘No Problem Here: Racism in Scotland’, a new book which draws on the work and opinions of academics, activists and anti-racism campaigners who argue for the necessity of bringing the fight against racism to the centre of national discourse, almost immediately inspired controversy.

Neil Davidson, a lecturer in sociology at the University of Glasgow, characterised the idea that Scotland doesn’t have a problem with racism as a “myth”, consequently triggering a debate over how hate crime statistics compare to elsewhere in the UK, and of Scotland’s own reputed self-image as a tolerant, welcoming place.

However, the ensuing discussion largely avoided the original motivation for the book –  to investigate the nature of racism in Scotland and bring it to the forefront of public discourse – which Davidson, along with his fellow authors and editors, presented as evidence before last week’s Cross-Party Group on Tackling Islamophobia at Holyrood.

Davidson tells CommonSpace that, before contemplating any future anti-racist policy, acknowledging the “insidious” and “institutional” form of racism in Scotland.

“There is a tendency for politicians to focus on individual acts (‘hate crimes’),” Davidson said. “I noticed, for example, that when Angela Constance was interviewed by the BBC on the Reporting Scotland feature on the book, she did not use the term racism, even though the interviewer did, but instead referred to prejudice and discrimination.  It’s not that I disagreed with what she said, but racism extends far beyond this type of behaviour and is most insidious in its institutional and state forms.

“The police killing of Sheku Beyoh was an example of state racism in action.” Neil Davidson

“Indeed, since we’re commemorating Marx’s bicentenary this year, it is worth reminding ourselves of his distinction between ‘the government’, which changes on a regular basis, and ‘the state’, which carries on irrespective of who forms the government. And we shouldn’t fool ourselves that all negative aspects of the state are because it is British: Scotland already has many aspects of a state apparatus, notably Police Scotland, and the police killing of Sheku Beyoh was an example of state racism in action.

“These different forms of racism may target different communities in different ways, so it is necessary to formulate strategies accordingly which should be informed by how racism is experienced by those communities.

Davidson also joins many other campaigners in positioning the struggle against racism “within the wider struggle for social justice.”

Elaborating, Davidson interprets this as identifying the reasons why people hold racist views, “which, in most cases, are not because they are stupid or inherently evil, but because in a distorted way it appears to make sense of their situation. You know the drill. I can’t get treated at the hospital; it must be because of migrants crowding out ‘native’ Scots (even though the NHS depends on migrant workers to function). I don’t earn enough money; it must be because migrants accept low wages and this drives them down for everybody (even though capitalists pay low wages, migrant workers don’t demand them).

“Scotland is one of many post-imperial, deindustrialising, and deeply class-divided Western European societies subject to all the morbid symptoms characteristic of the capitalist system in crisis. One of these symptoms is a resurgence of racism, as people seek false solutions for their problems and identify the wrong targets for their anger. In other words, to truly defeat racism, you have to remove the conditions in which it breeds, at the same time as opposing every manifestation of it.”

Asked what the Scottish Government could do to tackle racism in Scotland on a systemic level, with long-lasting results, Davidson argues that migration is at the “cutting edge” of all discussion about racism today, and acknowledges that the discussion of this subject by most Scottish politicians “is far more welcoming and generous than by those at Westminster.”

“While that doesn’t necessarily stop racism occurring on the ground,” he adds. “It sets a general tone which makes it easier to conduct pro-migrant arguments.

“There is, however, a tendency to talk positively about migrants purely on the instrumental grounds of them being ‘good for the Scottish economy’: if the Scottish birth rate began to rise again, would that mean we would no longer welcome them?

“Beyond migration, the current government has been admirably willing to accept Syrian refugees and to undertake initiatives such as the Race Equality Framework Scotland.

“The Government should refuse to cooperate with openly Islamophobic policies of the UK state, such as Prevent, although this would undoubtedly lead to conflict with Westminster.” Neil Davidson

“So what else could the government do? One, relatively simple, course of action would be to act as an exemplar by ensuring that its own staff reflect the ethnic make-up of contemporary Scotland. Another would be to insist that existing equality legislation is being fully implemented. Even at the basic level of data collection, not all Local Authorities are complying with the 2012 Scottish Duties which requires them to collect information on the ethnic composition of their workforce.

“Similarly, in terms of addressing inequalities and barriers in work and employment, more needs to be done around taking full advantage of the positive action provisions made by the Equality Act. Obviously there needs to be a broader shift in recruitment and work place practices and culture, but it’s a tool that’s there and we need to make proper use of it. It would be good to have evidence on how it’s used, who is using it, who is not making full use of it and how it could be used more effectively.”

Davidson also believes the Scottish Government could do more to address the under-reporting of racist incidents by those who suffer from them, which he argues contributes to the Scottish “myth” that there is no problem with racism in the country.

“There are obvious parallels here with the unwillingness of victims of sexual harassment, abuse or rape to report it,” says Davidson, “partly because they think that they will not be believed, and partly because they will have to relive the trauma, often while being questioned by lawyers who are trying to deny the reality of their experience.

“Making the process of reporting easier, less stressful and above all, to give it some point by acting on the reports is therefore a priority. This would of course involve the courts and Police Scotland in actually treating racial incidents seriously and taking action against perpetrators of racist hate crime.

“Finally, the Government should refuse to cooperate with openly Islamophobic policies of the UK state, such as Prevent, although this would undoubtedly lead to conflict with Westminster, it would also send a strong message about the kind of independent Scotland the SNP hopes to achieve.”

“Anti-racist campaigners must remain vigilant against the Scottish Government reducing the case for migration to economic calculation rather than solidarity and respect.” STUC Black Workers Committee chair Suki Sangha

Davidson’s proposals are echoed by Suki Sangha, chair of the Scottish Trade Union Congress (STUC) Black Workers Committee, who tells CommonSpace: “Confronting the normalisation of racism means challenging the myth that Scotland is an exceptionally tolerant nation. We must not shy away from calling out racism, nor should racist abuse be reduced to ‘hate crime’, when racism is deeply embedded within society and government institutions. Racism continues to be a problem in Scottish schools and more needs to be done to challenge this.

“UK Government policies like Prevent have legitimised racism and put greater strain on Muslim communities that are constantly being watched.

“While Nicola Sturgeon might position her government as more tolerant than Westminster, with a narrative of welcoming migrants, anti-racist campaigners must remain vigilant against the Scottish Government reducing the case for migration to economic calculation rather than solidarity and respect. We need a national anti-racism strategy that starts with the value of the people who live here and does not see migrants as commodities to import and put to work for economic gain.”

Discussing anti-racist campaigning in Scotland, Davidson says that the present movement requires a sense of priority and proportion: “It is necessary, and relatively easy, to face down 30 members of the Scottish Defence League; it is equally necessary, but much more difficult, to protect people from the Home Office bureaucracy, although the actions of the latter – at the moment, anyway – are a far greater threat to most BAME people than those of fascists.

“Part of the problem is that anti-racists and the left more generally have to constantly fire-fight against manifestations of fascism or the far-right. This has been relatively successful – it is one reason why fascism and the far-right more generally is far weaker in the UK than in many other parts of the developed world.

Discussing the controversy that greeted the book, Davidson said that “there was something obscene about people quibbling over whether Scotland has a slightly higher or slightly lower rate of race-related murders than England while Shabaz Ali was still lying in a Scottish hospital recovering from a racially-motivated knife attack.”

Davidson warns that Scandinavian countries that have been held up as a a template for an independent Scotland are examples of the dangers of complacency over the potential for racism and fascism to develop mass support.

“We only need to look at the Scandinavian countries, which had far higher levels of equality and social provision than Scotland, and which are still being brandished as a model for us, post-independence. These are now home to hard-right and quasi-fascist parties mobilising in opposition to migration and winning seats in their parliaments. If these societies can turn in that direction, it is a wilful blindness to imagine that Scotland – with its history of slavery, imperialism, militarism and religious fundamentalism – would be immune.

“The struggle against racism has to be part of the wider struggle for ‘another Scotland’ and ‘another world’.”