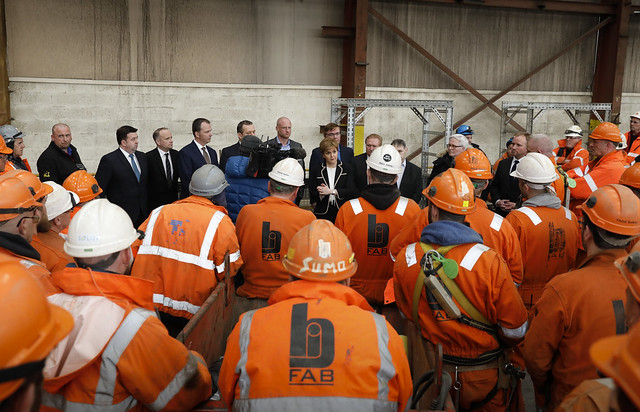 Unite and GMB: “The contract is a very small crumb of comfort to the local communities in Methil and Burntisland.”

A HUGE offshore wind farm development off the coast of Fife will deliver “a paltry return” in manufacturing jobs for the local community according to unions, as reports emerge that 200 jobs will go to the beleaguered Bifab firm.

The Canadian owner of of Bifab, DF Barnes, said it was “cautiously optimistic that work will be coming to Fife but negotiations are on-going”.

Bifab was mothballed last year and it has been feared that the Methil and Burntisland yards in Fife would close unless significant contracts from the licensing of the Neart naGoaithe (NnG) wind farm, located just ten miles off the Fife coast, to French giant EDF Renewables, are not secured.

Energy Voice reported on Wednesday that eight of the NnG project’s 53 jacket sleeves for the turbines will be manufactured at the Fife yards, with the rest of the jackets being manufactured in Indonesia, an environmental cost in transporting alone which the STUC has estimated to be the equivalent of 35,000 new cars on the road. The Scottish trade union body has estimated that if the full contract had went to the Fife yards, it would support over 1,000 jobs.

The reports of the 200 jobs were met with strong criticism from GMB and Unite unions in Scotland, with a joint statement from trade union secretaries Gary Smith and Pat Rafferty, who lambasted the proposal.

“It would be a paltry return for Scottish renewables manufacturing,” they said. “The prospect of just eight turbine jackets coming to Fife while the vast majority are built in Indonesia is scandalous.

“This is a £2 billion Scottish offshore wind project that will be largely delivered by cheap foreign labour and then shipped on diesel burning barges to the Fife coast. The renewables lobby and every politician that has promised a green jobs revolution must be cringing.

“The contract is a very small crumb of comfort to the local communities in Methil and Burntisland. It will create some desperately needed jobs for a period of time but nowhere near maximum capacity and it poses more questions than answers.

“As a minimum we need to know if the further investment needed to modernise the yards will be brought forward, what the prospects are for securing major contracts on future offshore wind projects like Seagreen, and what are DF Barnes’ long-term plans for the business.

“Again the absence of any proper industrial planning has been exposed and the price of this political failure as always is paid by our working-class communities. Without serious investment from both the Scottish and UK Governments now, the prospect of a green jobs boom lies in tatters.”

Scottish Labour MSP and energy spokesperson Lewis MacDonald had a more positive outlook on the report, describing it as “good news for BiFab both in Fife and Arnish”.

He said: “This is exactly the kind of award we need to see for the renewable energy sector in the north of Scotland, because we need to see employment and economic benefit from these projects going forward.”

A Scottish Government spokesman said it would “not be appropriate to comment on the specifics of the project” but that the government “encourage all parties to work towards a positive outcome”.

He added: “All parties are currently working collaboratively in respect of the ongoing commercial discussions on the NnG project.”

The Scottish Government has also faced criticism over the NnG windfarm project, with the Fife Ready for Renewal trade union campaign writing to Finance Secretary Derek Mackay earlier this month querying why the government had “not nailed down commitments from the developers to bring work to Scotland?”

First Minister Nicola Sturgeon has previously stated that she “fully supports” the campaigning aims of the Fife Ready for Renewal campaign.