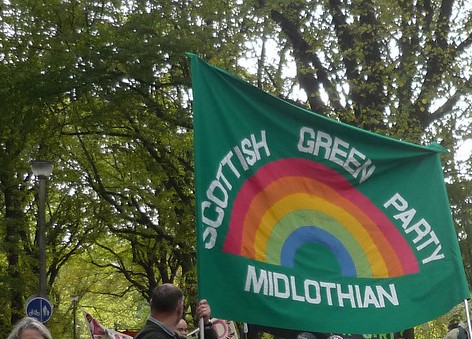 The Green Future Group, launched last week, has fielded a number of candidates for key party positions, but remained neutral on those standing for the leadership

THE SCOTTISH GREENS’ internal elections, voting for which begins this week, will see a raft of candidates representating a new organisation which hopes to convert the left-wing party to an explicitly ‘eco-socialist’ platform.

The new organisation, the Green Future Group (GFG), “initially consists” of seven candidates, according to a public statement released after its launch, who it is putting forward for key positions within the party, although it is fielding none for the new role of co-leader, which replaces the previous system under which Patrick Harvie MSP and Maggie Chapman were co-conveners. The GFG has remained neutral on the party leadership itself.

On its website, the GFG lists its priorities as a Green New Deal, eco-socialism and independence for Scotland, writing: “The Scottish Green Party must be an explicitly and avowedly left-wing movement. Capitalism cannot solve the climate crisis, or the deep social and economic inequalities that plague society. We stand against austerity, xenophobia and all other forms of prejudice, and against corporate Greenwashing that’s trying to blunt the Green movement.”

However, following a report in the Sunday National newspaper which made comparisons between the GFG and the internal Labour Party pressure group Momentum, Emma McShane, a candidate for the party’s Standing Orders Committee, stressed in a letter published by the National today that the GFG was “not attempting to challenge the current party leadership, or support any candidates standing to lead the Scottish Greens.”

While the GFG has not endorsed any of the five candidates for the leadership, its emergence has been welcomed by two of them, Aberdonian activist Guy Ingerson and former Edinburgh City Council candidate Lorna Slater.

“I’m going to continue to stand on my own platform for this internal election but I applaud their calls for a revitalised party, increased transparency and better internal democracy.” Scottish Green Party leadership candidate Lorna Slater

Speaking to CommonSpace, Slater commented: “GFG was an unexpected development within the party, I was initially taken aback, but I’m pleased that we have dedicated members with new ideas and the courage to try new things. I’m going to continue to stand on my own platform for this internal election but I applaud their calls for a revitalised party, increased transparency and better internal democracy.

“Members standing openly for party posts and saying what they’d like to bring to the role; internal elections with multiple candidates standing – this is all great news for the party. I said, when I opened our Spring Conference this year, that I was excited for the future – I was right to be. The Greens have a great opportunity to grow here: a new party structure, revitalised party democracy and possibly new leadership. We’ve got great things ahead of us.”

Guy Ingerson also told CommonSpace: “I was thrilled to see the launch of the Green Future Group. Not because they are endorsing my campaign – they are completely neutral regarding the leadership contest – but because they are espousing the same ecosocialist message I aim to share.

“My leadership bid is based on the need for a campaigning leadership to compliment our parliamentary leadership, in a way seen in Green parties elsewhere in Europe. This has worked well in England.

“So, with that in mind, I’m also glad to see the Green Future Group looking to build a campaigning culture within the party across Scotland. This is needed now more than ever, as we’ve seen the rhetoric of the SNP Scottish Government fail to match the reality. They need to be held to account for that.

Laura Moodie, a GFG candidate for the party’s Member, Election and Campaigns Committee, explained to CommonSpace: “One of the best things about the Scottish Green Party is that we’re a democratic, membership-led party unlike any other. The party may be electing Co-Leaders for the first time but they won’t hold anywhere near the power their counterparts in other parties do.

“Volunteer-run committees hold just as much, and in some cases more, power to get stuff done and set the course of the party as the leadership. That’s where the grassroots of the party can really get involved and that’s why we’re very explicitly choosing to focus our efforts on these national committees.

“The slate of seven candidates reflect a range of Green Party members, from rural Greens who’ve been challenging the Tories on their home turf and securing Green wins on things that really matter like bus service provision and climate action, to inspiring young Greens who’ve run election-winning campaigns. What unites us is a desire to support members and local branches to create and run winning campaigns, so that more people than ever vote Green and we can make the huge changes needed to act on climate breakdown before it’s too late.”

Addressing the results of April’s European elections, where the party did not win an MEP securing 8.2 per cent of the vote, less than the 12.1 per cent the party won UK-wide, Moodie said: “The Green Future Group is seeking to turn disappointment in the EU Election result and frustration at the slow pace of political and social change into positive action, by emphasising the policies that only the Greens will stand up for.

”We’re overt ecosocialists, believing that capitalism can neither solve the climate crisis nor the deep and growing social and economic inequalities in Scotland.” Green Future Group candidate Laura Moodie

“By transforming our transport, energy, food, housing and employment systems through a genuine Green New Deal that the Greens are the only party offeringGreen New Deal that the Party, Scotland can lead the world in tackling climate chaos. We believe this should be the basis of our budget negotiations at Holyrood and underpin the policies we put forward at elections.”

Regarding the GFG’s hopes of reforming the Scottish Greens into an explicitly anti-capitalist party, Moodie said: ”We’re overt ecosocialists, believing that capitalism can neither solve the climate crisis nor the deep and growing social and economic inequalities in Scotland. Climate breakdown won’t be resolved by individual lifestyle choices but by creating an economic system that cares equally for people and planet.

“We believe Scotland can build a better future than Boris’s bleak Brexit Britain. Independence is a central part of the social and economic transformation we seek and we’ll argue passionately for an outward-looking, independent Scotland within the EU.

“Scottish Greens have been through a period of huge growth and restructuring. Now is the time for a fresh start, to state clearly what the Scottish Greens stand for and to galvanise and enthuse our members to make the case for the Scotland they want to live in.”