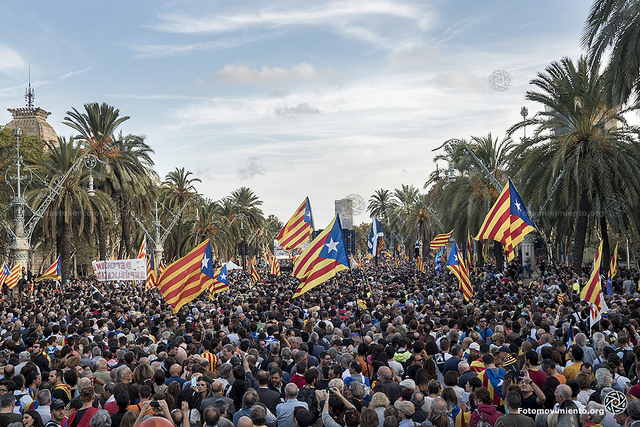 “WE HEREBY CONSTITUTE THE CATALAN REPUBLIC,” read the motion today passed by the Catalan parliament.

Pro-independence lawmakers from a range of parties brought the motion to the floor, along with the Declaration of Independence which was signed by Catalan MPs two weeks ago, and then immediately suspended while the Catalan Government sought dialogue with its Spanish counterpart following the violence and repression of the 1 October independence referendum.

The vote was won by Catalonia’s pro-independence parties, with 70 voting in favour, 10 voting against and two votes left blank.

According to Catalan News, the translated text of the motion reads: “We hereby constitute the Catalan Republic as an independent, sovereign, legal, democratic, socially-conscious state.”

Culminating the unpredictable events of the last 48 hours, during which time Catalan president Carles Puigdemont defied widespread expectations and announced that he would not be calling a snap election due to a lack of guarantees from the Spanish Government, the vote saw impassioned speeches from pro-independence politicians and angry walk-outs from opposition parties.

Anti-independence MPs had attempted to use various aspects of parliamentary procedure to prevent the vote, which was originally scheduled to take place at noon, but was delayed by several hours.

After the remaining anti-independence parliamentarians walked out of the chamber, leaving Catalan and Spanish flags symbolically lain side by side on the vacated benches, the secret vote began. One of the last votes was cast by Puigdemont, with the count beginning immediately.

“The measures under 155 are illegal and unjust and I am not prepared to accept them.” Catalan President Carles Puigdemont

The Spanish Senate, in which Spanish Prime Minister Mariano Rajoy’s rightwing People’s Party (PP) holds a majority, will on Friday vote on measures to be taken against Catalonia, including the activation of direct rule, which has not been imposed on Catalonia since the death of Spanish fascist dictator Francisco Franco 40 years ago.

In anticipation of this, Puigdemont told press: “The measures under 155 are illegal and unjust and I am not prepared to accept them.”

Puigdemont’s decision not to hold fresh elections has been attributed the lack of assurances or goodwill gestures from the Spanish Government, but may also have been motivated by pressures from within the pro-independence movement.

Prior to the vote, Anna Gabriel of the CUP told parliament that Article 155, the mechanism of the Spanish constitution which allows the Spanish Government to impose direct rule on the autonomous region, is “born from the hunger for revenge and humiliation of an entire country”.

“Catalonia can no longer be governed without the permission of its citizens.” Republican Left of Catalonia MP Marta Rovira

Republican Left of Catalonia parliamentarian Marta Rovira said in parliament, prior to the vote: “We are here today because a majority in Spain, which is not majority in this chamber, has blocked our efforts to create a more just society.

“Catalonia can no longer be governed without the permission of its citizens.”

Carles Riera of the CUP said: “We ask Parliament to declare Catalonia an independent state in the form of a republic.”

The Spanish Prosecutor has reportedly said anyone participating in the renewed declaration of independence will be prosecuted.