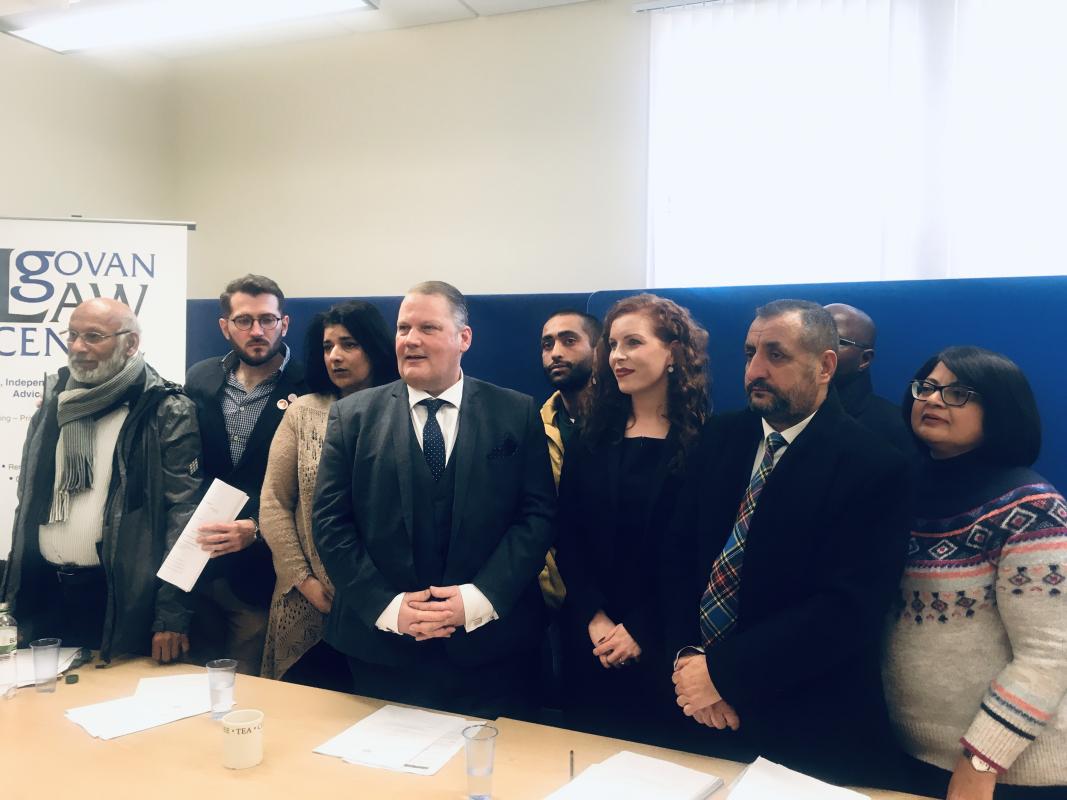 A RULING from Scotland’s highest civil court has found that imposing lock-change evictions on asylum seekers without court orders is lawful and that the private contractor involved is not bound by human rights law in the way a public authority would be.

The ruling means that Serco, the private firm which was, until recently, contracted by the Home Office to provide housing for asylum seekers in Glasgow, is free to evict some 150 people who are living in its properties.

While the Home Office funds accomodation for people applying for asylum in the UK, once an application fails the funding is withdrawn immediately, meaning that Serco has been required to fund the places itself.

The solicitors in the case, from Govan Law Centre, said they would be seeking their clients’ permission to appeal the ruling at the UK Supreme Court, which it must do within 28 days.

Alongside immigration, homelessness and human rights campaigners, the solicitors have raised particular concerns about the court’s decision that Serco was acting as a private company and was therefore not obligated by human rights duties.

Solicitor advocate and principal solicitor at Govan Law Centre Mike Dailly said this was a “truly sad day Scotland and for human rights” and that the ruling meant that “Serco can effectively take the law into its own hands”.

He said: “Allowing the home office’s cross appeal, the effect of today’s ruling is that the UK government can outsource its statutory and international legal obligations to a private company.

“In effect that means that you can contract out of the Human Rights Act 1998. We think that’s quite disturbing and it gives rise to a number of very serious public policy implications in Scotland and, indeed, beyond.”

The Scottish Human Rights Commission, which intervened in the case by setting out its analysis and concerns about the human rights issues raised, has echoed these concerns.

Commenting on the judgement, chair of the Commission Judith Robertson said: “We have serious concerns about the implications of this ruling, both for the people directly affected and for the protection of human rights more broadly.

“The court’s finding that Serco is not acting as a public authority in this context, and therefore is not bound by human rights legal obligations, has profound consequences for how people’s rights are protected when public services are delivered by private providers.

“This is an area of law that, in our view, requires further clarification. Governments should not be able to divest themselves of their human rights obligations by outsourcing the provision of public services.

“There is potential for further legal proceedings on this point and the Commission will consider the most appropriate next course of action.”

The points raised by the Commission in the case were that Serco’s lock-change policy could breach the right to private, home and family life protected by Article 8 of the European Convention on Human Rights and the Human Rights Act 1998.

Robertson added that the court had made a welcome recognition of the “need for sufficient procedural safeguards” but said that the Commission remained concerned that the people affected “who are already in a precarious and vulnerable situation, face an unnecessarily heavy burden when it comes to accessing their human rights”.

Principal Solicitor of Shelter Scotland Fiona McPhail said the decision was “deeply disappointing” and created a “high risk” that the people affected would “end up on the streets of Glasgow”.

She said: “Our clients are continuing to progress their asylum claims and cannot return to their country of origin.

“The finding that Serco is not a public authority and therefore does not need to comply with the Human Rights Act is deeply concerning.

“It’s the state that has the statutory obligation to accommodate asylum seekers – if by privatising those services, the state can avoid its obligations under human rights law, this sets a dangerous precedent.”

The ruling described the case as relating to a “failed asylum seeker”, but solicitors and campaigners have argued that this, and the case as a whole, does not reflect the complexity of the process in which applications are often rejected and later accepted when new evidence is obtained.

Senior solicitor at Govan Law Centre Lorna Walker said: “In one of our cases, our client was granted asylum two weeks after we secured an interim interdict to prevent his locks from being changed.

“This is a perfect example of how dangerous it is to change someone’s locks without a court of law hearing the individual merits of the case.

“To lose your home and become street homeless, especially when you have no recourse to public funds, is one of the worst things that can possibly happen to a human being.

“It is our position that without a court of law, the outcome can be catastrophic.”

Labour candidate for Glasgow North East Paul Sweeney (who was MP at the time of the General Election being called) joined with campaigners and individuals affected by the decision at the Govan Law Centre, where he pledged to take action on the issue if elected.

He said: “This necessitates emergency legislation if there is a progressive majority in the UK Parliament after the next election.

“I can only speak for the Labour Party’s position but we will certainly be seeking to remove all private sector involvement in the asylum seeker process as a first step, and to ensure that it’s based on the idea of human dignity, to ensure there are no summary evictions and to ensure that there is a cooling off period in which no one will be made destitute in any circumstances.”

Sweeney added that, as agreed by members at the party’s autumn conference, a Labour Government would close all immigration detention centres, including Dungavel “from day one”.

“The court’s finding that Serco is not acting as a public authority in this context, and therefore is not bound by human rights legal obligations, has profound consequences for how people’s rights are protected.” Scottish Human Rights Commission chair Judith Robertson

Sweeney emphasised: “There will be no immigration detentions and no imprisonment in what are effectively concentration camps. That will not happen.”

SNP candidate for Glasgow South West Chris Stephens (also an MP before the election announcement) also met with campaigners, expressing his concern that a private company awarded a public contract should be exempt from human rights legislation and calling on the people of Glasgow to demonstrate against the evictions.

Stephens said: “In the event I’m re-elected I would certainly be looking at changing the law in that regard.

“If I’m re-elected I will be re-introducing my asylum accommodation bill to ensure that no asylum seeker is evicted without going through a court or tribunal process.

“I’m very concerned on behalf of my constituents who are under threat of eviction from Serco, and we will be working alongside asylum charities, Living Rent and others to ensure that no evictions take place in this city.

“We are quite clear the people of Glasgow have demonstrated in the past that they are willing to exercise their right of freedom of peaceful assembly to ensure no evictions take place in Glasgow.”

Scottish Greens Co-Leader Patrick Harvie MSP also responded to the ruling, describing the UK’s approach to asylum as “inhumane” and the actions of Serco as “despicable”.

Harvie said: “The court has ruled that Serco’s actions were legal, but that does not make them right. This decision simply shows that current laws are not fit for purpose.

“A vote for the Scottish Greens on 12 December is a vote to reject the Tory’s contemptible approach and put dignity and compassion at the heart of how Scotland deals with those seeking safety on our shores.

“The ruling increases the urgency of putting in place emergency accommodation for the people Serco intends to make destitute over the winter months.

“The Scottish Government has made commitments on this, but it has not yet been delivered, and will clearly be required in the days and weeks ahead.”

Serco has welcomed the ruling by Court of Session as a vindication of its position, and has indicated its intention to begin the process of evicting all of the remaining tenants.

Serco spokesperson Julia Rogers said: “For some 18 months we have been supporting people whose asylum claims have failed, providing free accommodation and utilities.

“We have listened to the public concerns that the process to take back the properties they were living in might be unfair or illegal, but we now have clear judgements from Scotland’s highest court that our approach is completely proper and within the law.

“During this time Serco has been demonised and subject to extreme criticism, and the fact that we have spent millions of pounds supporting people who no longer have a right to remain in the UK and providing them with free accommodation, has been widely ignored.

“We will be working with the authorities and the Sheriffs Court in Glasgow to ensure an orderly sensitive application of the law.”

Rogers added that the firm would not seek to remove “more than 20 people in any one week” and that she expected that the process would take several months.