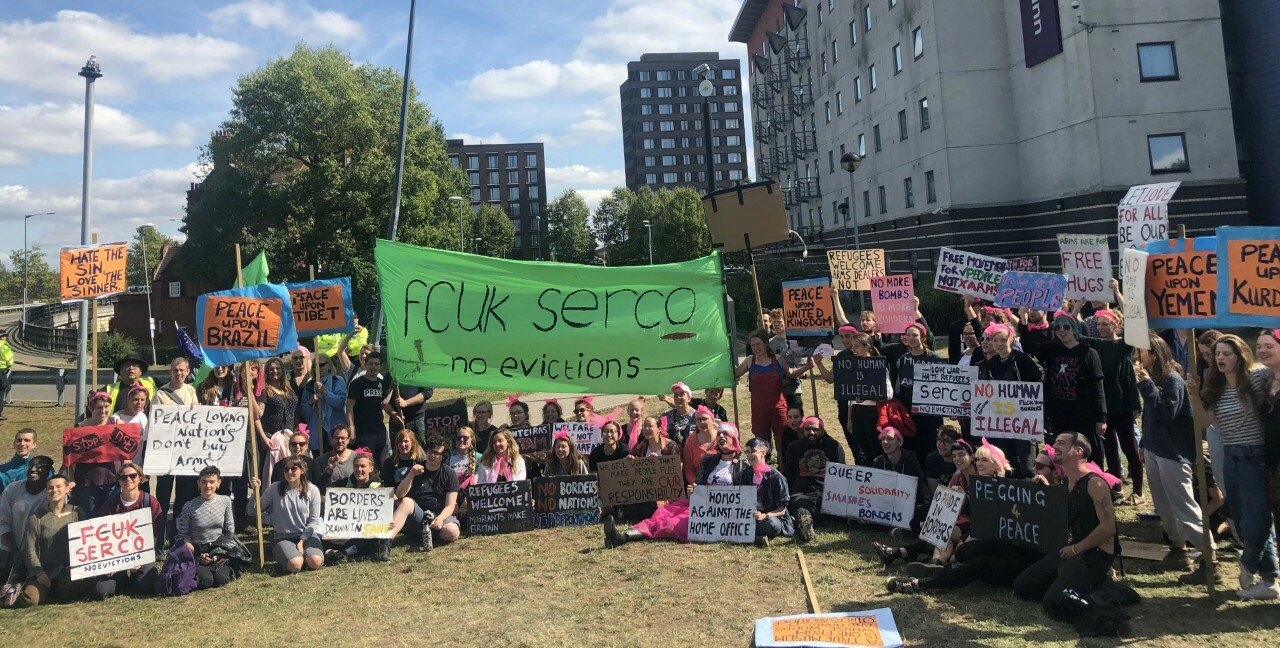 Living Rent has pledged to hold the Mears Group to its commitments, while the Scottish Refugee Council seeks a guarantee of no summary evictions, “lawful or not”

CAMPAIGNERS opposed to the eviction of asylum seekers by the private housing provider Serco have welcomed recent commitments from the Mears Group, which has assumed Serco’s contract with the Home Office and will begin full service delivery on 16 September.

For over a year, activists, politicians and third sector organisations throughout Scotland have sought to obstruct the threatened eviction of hundreds of asylum seekers in Glasgow whose appeals have been refused, and in particular to halt Serco’s controversial practice of changing the locks on the properties of asylum seekers, thus threatening them with homelessness.

Serco was forced to pause its lock-change policy, following a legal challenge from the Govan Law Centre, which by the end of August had secured over 80 interim interdicts preventing lock changes from taking place. However, concerns remained amongst campaigners that this would prove to be a temporary solution only.

Anger over the evictions has not dissipated as Serco approach the end of their contract, with protestors at the ongoing DSEI arms fair in London yesterday sending a public message of solidarity to those fighting the Glasgow evictions.

“In the future, we expect that landlords, corporations, and local governments will think twice about so blatantly threatening the rights of tenants in Scotland.” Living Rent spokesperson

With Serco’s Home Office contract for asylum accommodation in Scotland now passing to the Mears Group, public pressure has been brought to bear on the housing and social care provider to break with the policies pursued by Serco.

On 6 September, several organisations – including Shelter Scotland, the Scottish Refugee Council, the Refugee Survival Trust and Govan Community Partnership – took out an ad in the National newspaper, urging Serco to “help end the fear and anxiety and commit to doing things differently.”

“As you take over the asylum accommodation contract from Serco next week, we welcome the opportunity for a new approach to supporting people seeking refugee protection,” the ad states.

“But, for the fear and distress in Glasgow to end, we need to know that you will never carry out summary evictions.”

While the Mears Group has not yet guaranteed an end to summary evictions, it has been confirmed by the Living Rent tenants’ union that the provider has committed to no lock changes without a court order.

Speaking to CommonSpace, a Mears Group spokesperson said: “We have met with the Scottish Refugee Council and other key partners in Scotland and have had constructive discussions.

“We have reassured them that in cases where an individual is refused asylum, we will follow the due legal process in all cases and respect all rights of review and appeal, we will make sure that they have access to advice and support from Migrant Help to reach the best outcome and we will notify local authorities, to help prevent homelessness.

“Mears is intending to start full service delivery on 16 September assuming all responsibilities from Serco. At this point it is not expected that any people will need to move home.”

Responding to Mears’ statement, a spokesperson for Living Rent told CommonSpace: “As Mears moves to officially take over the contract to house asylum seekers, we hope that Mears will avoid carrying out the cruel policies and practices that Serco did.

“We recently met with Mears and Unite the Union, who represent Mears workers, and helped secure a number of commitments. Most notably, Mears committed to no lock changes without a court order,
something we and other groups will hold them to account to.

“They have also confirmed that they are registering as a social housing provider, with the intent of housing those with existing asylum applications and any new asylum seekers in their own housing stock.

“Unfortunately, this does not include the roughly 250 of the original 300 who are still under threat of lock change evictions.

“Mears have also indicated that when asylum seekers are given leave to remain, they will be given a Scottish secure tenancy, the same type of tenancy for tenants under a housing association.

“While these developments represent a step forward for the housing rights of future asylum seekers, there are still a significant number of people under threat of destitution.

“Mears have indicated that they are open to the possibility of housing anyone affected by lock changes who also has leave to remain to be housed by them in one of their new properties and their CEO David Miles is looking into getting a full breakdown of the numbers and status affected from the Home Office.”

The spokesperson continued: “While this solution is by no means perfect, it represents a significant blow to the long-standing practice of violent lock-change evictions against those made vulnerable by the hostile environment.

“These advancements were only made because organised tenants and workers, mobilising their communities and neighbours, forced a multinational corporation to the table. In the future, we expect that landlords, corporations, and local governments will think twice about so blatantly threatening the rights of tenants in Scotland.”

O’Neill told CommonSpace: “We welcome the opportunity for a new approach to asylum accommodation in Scotland. On behalf of our clients, we are seeking a public commitment from Mears before their takeover next Monday on never carrying out summary evictions regardless of whether ongoing legal proceedings deem them to be lawful or not.”

Picture courtesy of Glasgow Against the Arms Fair