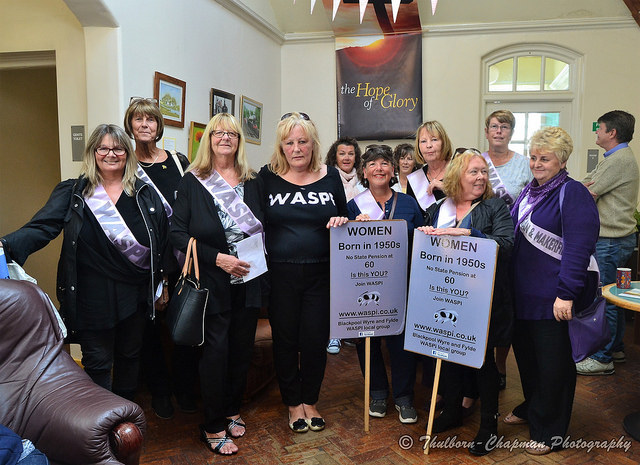 A FREEDOM OF INFORMATION request has revealed that the Department of Work and Pensions (DWP) has concluded just six complaints investigations relating to the Women Against State Pension Inequality (WASPI) campaign, while 4,557 complaints have been received.

Campaigners have said the figures provide evidence that the DWP is not taking the situation of the WASPI women seriously enough. The campaign calls for compensation for the loss of income to women born in the 1950s who expected to receive a pension at age 60 and did not receive due notice of the changes in order to financially prepare.

Pat Milligan of WASPI East Lothian told CommonSpace she lost out on £27,000 over four years as a result of the changes, but only found out when she was 58 that she wouldn’t receive her pension at 60 but at age 62, before a further change raised the age to 64.

Milligan said the information on the DWP’s complaints responses was “a slap in the face to 50s women”.

“The fact there’s been as many complaints and only six seen through shows the contempt we’re held in,” she said. “It feels to some of us like a kick in the teeth.”

“The feeling within WASPI is that the DWP are digging their heels in and taking their time over dealing with complaints. There is a feeling that they would like us to go away – they think we’re going to die or disappear.

“The answer to that is that we’re not going to go away.”

Milligan said there had been an “upsurge” of women getting involved in the campaign, angered by the fact they have still to receive their pension, or that friends born in the same year are receiving theirs earlier due to the phased implementation on a sliding scale.

She emphasised that the campaign was not about the fact that pension age had been raised, but about “the maladministration of how it was handled”.

Milligan said the DWP would be receiving another dozen letters in the next few weeks from East Lothian alone, and welcomed the growing support of MPs locally and across Scotland.

“The DWP are not taking the situation seriously enough and it will take years to resolve the situation at this rate.” Susan Bolland, Ayrshire WASPI

The UK Government’s tax and spending plans for the coming year were announced last week, resulting in criticism over the chancellor’s failure to address the concerns of the WASPI campaign.

The DWP’s Independent Case Examiner (Ice) office has set up a team to investigate WASPI complaints, comprised of three investigation case managers, which came into on 2 October this year. In response to an FOI request, the DWP said there were “no additional costs associated with establishing the team”, which came from within the existing ICE team.

Susan Bolland, spokesperson for Ayrshire WASPI said that these resoueces were inadequate to deal with scale of the issue. “With 4,600 letters of complaint already at ICE stage and many 1000s more in the pipeline, it is inadequate to have three full time people dealing with this amount of complaints,” Bolland said.

She added: “The DWP are not taking the situation seriously enough and it will take years to resolve the situation at this rate. We are still supporting and encouraging women to fight for their well earned pensions and we are not going away.

“The DWP and the government need to listen to us and resolve this issue sooner rather than later.”

Anne Potter of WASPI Glasgow and Lanarkshire also said the DWP “should be making the case for additional resources if they have additional work”, and said that spreading out existing resources could detract from their ability to address other complaints.

READ MORE: Scotland’s women march against May for justice on pensions

“If they have over 4,500 cases already”, Potter said, it is likely there will soon be “thousands more”, leading to an “ever increasing workload”.

She said: “They’ve only allocated three people, and not even new people – people within their own team who have been taken off casework elsewhere. The team is looking at various issues, one of which is the pension issue.

“As far as I’m concerned they’re not dealing with the casework – they’re not clearing very much.

“But the bigger concern is that there are other issues not being looked at because of this, like Universal Credit.”

Potter also said the campaigners would like to have “more of an insight into what they’re investigating”. She was concerned by the fact that some campaign members had been contacted by the DWP requesting information on their employer’s contribution and how much they had spent of it. “This shouldn’t have any bearing on our claim, which is about the state pension,” she said.

“Their dedicated complaints service is a complete sham, and it isn’t delivering for the 3.5 million WASPI women who deserve justice and fairness.” SNP MP Mhairi Black

SNP MP Mhairi Black, who has been a strong supporter of the WASPI campaign, commented: “With thousands of complaints flooding into the DWP from women who have been robbed of their state pension it is astonishing the Tories have only given six of these the courtesy of a response.

“This strikes at the heart of the sheer incompetence of this Tory government. Their dedicated complaints service is a complete sham, and it isn’t delivering for the 3.5 million WASPI women who deserve justice and fairness when it comes to their pensions.

“Theresa May managed to rustle up a billion pound bung for the DUP, so she could cling on to power. She found an extra £3 bn this week to dig her way out of the Brexit muddle she’s found herself in. But apparently she can’t find a single penny to give women the pensions that they are due.

“And despite Scottish Tory MPs pledging support to WASPI women during the election campaign – since coming to office, the Scottish Tories have been AWOL on this issue.

“The Tories must act now to right an obvious wrong, and provide a decent transitional arrangement for WASPI women.”