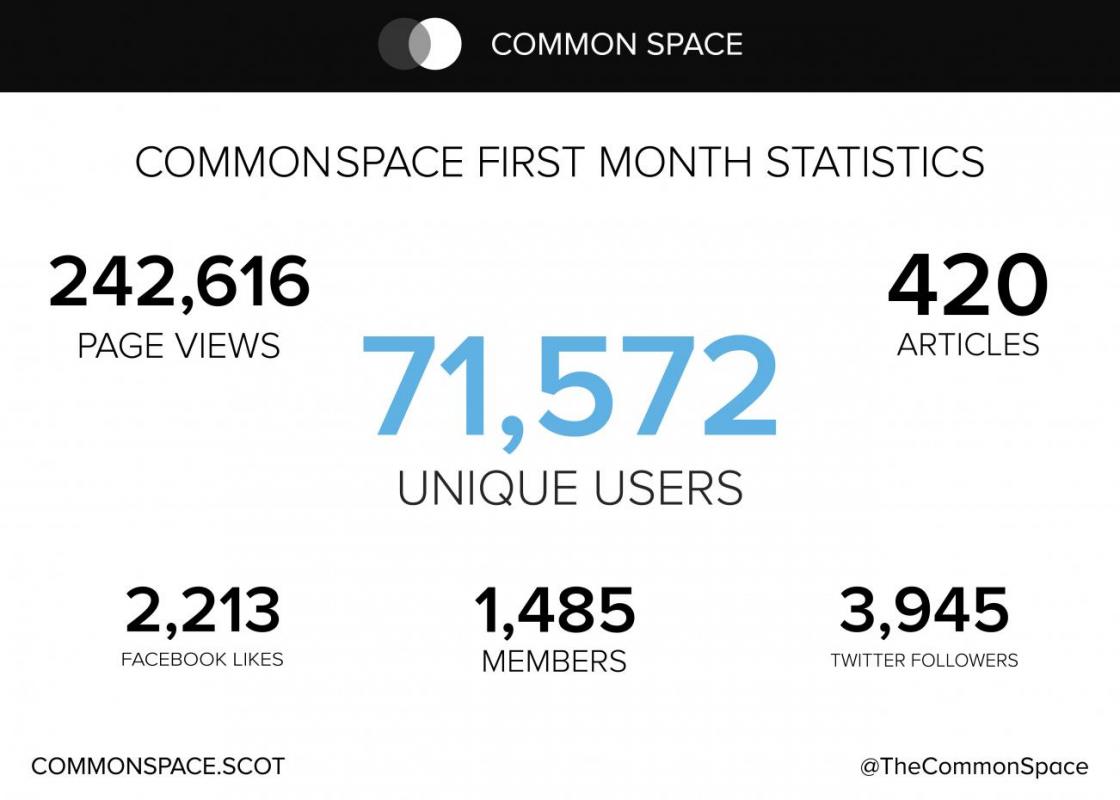 CommonSpace launched in January and has made an impact on the UK media landscape already with a string of exclusive stories being picked up by mainstream outlets, explains editor Angela Haggerty

WHAT a month at CommonSpace!

After a technical hitch at the beginning of January, our full launch was slightly delayed. We finally got off the ground on Monday 26 January, and the team have been working incredibly hard, as our statistics show.

Our small team of journalists – Ben Wray, Liam O’Hare and Michael Gray – have produced the vast majority of a staggering 420 articles.

We’ve had a string of exclusives: on our first day, we broke the news that the ‘independence girls’ (click here to read more) had been cleared by police of any wrongdoing after shocking arrests in the face of unionist riots. The story made the front page splash in the Daily Record the next day.

Another of our recent stories charted the escapades of Sir Peter Hendy, the head of Transport for London, who had a keen interest in male-only dinners which invited women only as entertainment and waiting staff (click here to read more). That story was picked up by the Independent and the Daily Mail.

In month one, we launched our first big campaign. The attempt by locals in South Cowal to buy out the Castle Toward estate, which had long been popular for hosting school activity trips and events, was a big move. But the community had a huge hurdle to overcome – Argyll and Bute Council.

Ahead of the deadline for the buy-out approval, CommonSpace launched a campaign and series of articles supporting the community in its fight against an inexplicable stance from the local council of standing in its way.

In that week we published a series of vital stories exposing the culture within the council and bringing the story to the wider public attention.

An exclusive story revealed serious concerns about care workers earning less than the minimum wage following privatisation of services and a failure by the council to respond to calls for an investigation (click here to read more).

Another piece uncovered worrying allegations of bullying and intimidation not only for council staff who stood up to senior management, but of local journalists who tried to expose it (click here to read more).

The people fighting for Castle Toward were left feeling exasperated. CommonSpace gave the community a voice, and we will continue to elevate the voices of the people battling hard for a better life, as well as holding those in power to account.

Other big stories on CommonSpace in our first month included coverage of Scottish Government proposals which could lead to the introduction of a national ID register (click here); the University of Glasgow’s investment in the arms trade – a story picked up by the BBC (click here); in-depth international coverage of the Greek election and strategy of Syriza (click here); and extensive coverage of TTIP (click here).

And it hasn’t all been about the website. In January, CommonSpace teamed up with the NUJ to host a debate in Glasgow’s Oran Mor exploring media ethics and freedom of speech in the wake of the Charlie Hebdo shootings in Paris.

A panel including Sunday Herald head of news Neil Mackay, 5Pillars editor Roshan Muhammed Salih and Professor Mona Siddique of the University of Edinburgh, debated with an audience of around 150 people. A lively Twitter debate took place alongside the event as people watched from home on an Independence Live stream, and it was covered the next day by The Drum media website and All Media Scotland.

CommonSpace has had a strong start to the year, and we have a lot of work ahead.

It would not be possible without the support of our donors and readers. With funding directly from you, we have produced a rolling news website bringing angles and perspectives the mainstream media no longer gives column inches to. We are providing a platform for people and communities to raise their voices.

So thank you, and we hope CommonSpace is doing everything you hoped it would.

We’re always keen to hear your feedback, you can contact us any time on media@common.scot

And if you’re not yet giving a regular monthly donation to the Common Weal, which owns and funds CommonSpace, you can find out more about supporting us by clicking here. Just PS5 a month helps us continue our work.

Month one complete, here’s to many more!