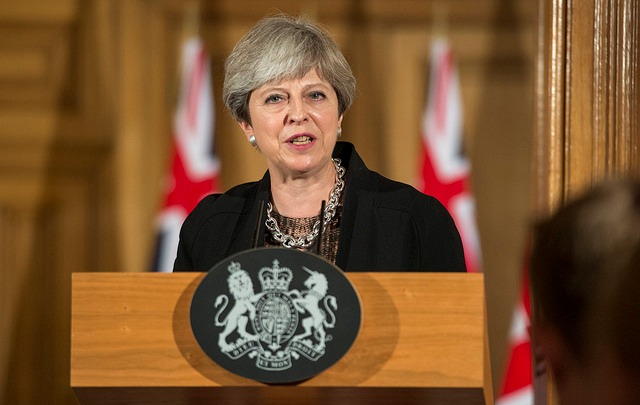 PRIME MINISTER’S QUESTIONS on 11 October saw opposition and even Tory MPs put Theresa May under pressure on Universal Credit, PIP and EU negotiations.

Jeremy Corbyn focussed on Universal Credit, only making passing mention of a lack of progress on Brexit negotiations as one among a “string of failures” by the Conservative government.

The Labour leader said the roll out of Universal Credit is causing rising “debt, poverty and homelessness”, noting that half of tenants claiming the benefit are at least one month in rent arrears.

Corbyn asked: “Does the prime minister agree it would be irresponsible to carry on regardless?”

“Is it not right that if the Prime Minister cannot lead she should leave?” Labour leader Jeremy Corbyn MP

May deflected the issue onto the previous Labour government, arguing that Labour’s welfare policy had led to 1.4 million people spending “the last decade trapped in out of work benefits”.

She said: “What we want is a welfare system that provides a safety net for those who need it, that helps people get into the work place, helps people to earn more and to provide for themselves and their families.

“The system that we inherited from Labour did not do that.”

Referring to what he said were government failures, including rising poverty, unemployment, homelessness, and leaving the NHS at “breaking point”, Corbyn asked: “Is it not right that if the prime minister cannot lead she should leave?”

“The Equality and Human Rights Commission said Labour needs to establish that it is not a racist party.

“And the Labour Party leader of Brighton Council threatened to ban Labour conferences because of freely expressed anti-Semitism.”

May did acknowledge that there was more to do in order to iron out issues with the Universal Credit system, particularly responding to her own Tory MP Heidi Allen, who argued that the “in built six week wait doesn’t work”.

“She is hamstrung by a reduced parliamentary majority and a divided party of right-wing Brexiteers.” Ian Blackford MP (SNP)

A resolution was passed at the SNP conference this week condemning the rollout of Universal Credit and the in-built six week delay, and calling for full devolution over welfare benefits to the Scottish Parliament.

Another recurring theme of the questions put to May was the uncertainty and risks of the Brexit negotiations.

SNP MP Ian Blackford asked the prime minister why she “hasn’t been straight forward about how she would vote” if there was to be another EU referendum.

Unsurprisingly, May said there will be no second referendum, to which Blackford responded: “The prime minister couldn’t answer the question because she is hamstrung by a reduced parliamentary majority and a divided party of right-wing Brexiteers.

“The SNP is the only party in this House which is united on the issue of Brexit. We know crashing out of the Single Market and the Customs Union will cost Scotland 80,000 jobs and £2,000 per person, per year.”

Blackford told May “now is the time for leadership”, and asked the prime minister to “come off the fence”.

May responded simply: “Now is the time for the SNP leadership to accept that to save jobs in Scotland, they need Scotland to remain part of the United Kingdom.”

May was similarly criticised by Labour MP Heidi Alexander for being “afraid of the most right wing, rabid elements in her own party”, and “ramping up rhetoric of a no deal Brexit”. May insisted that this was not the case and that the government was working to ensure a good deal with the EU.

She took pains to remind her opposition that she would seek a transitional agreement on the same basic terms as are currently in place, but said that she was “very clear” that the UK will cease to be full members of the single market and customs union upon leaving the EU in March 2019.

The prime minister did confirm, in response to a question from Tory MP Ian Duncan Smith, that the government was “preparing for every eventuality” and “committing money to prepare for Brexit, including a no deal scenario”.

Pressed on protections of the rights of EU nationals by Labour MP Karen Buckley, May said that the government’s position was clear: “We want them to stay because we value the contribution they’re making.”

She added: “If there is no deal, obviously we will have to have arrangements with other member states.”

One point on which May was adamant, in answer to a query from Tory MP Peter Bone, was that the UK did not wish for the negotiation period to be extended beyond the two years.

May was also pressed on ring-fencing money for mental health, funding cuts impacting on domestic abuse services, and the change from Disability Living Allowance (DLA) to Personal Independence Payments (PIP).

Labour MP Gareth Snell gave an account of a constituent whose benefits were removed as a result of the switch from DLA to PIP and waited six months for an appeal which –  several days after he passed away- found that he should in fact have been granted PIP .

May offered her “deepest condolences”, and said: “We are working to ensure there is greater consistency in original PIP assessments. We introduced PIP to ensure we can focus payments on those who are most vulnerable. ”