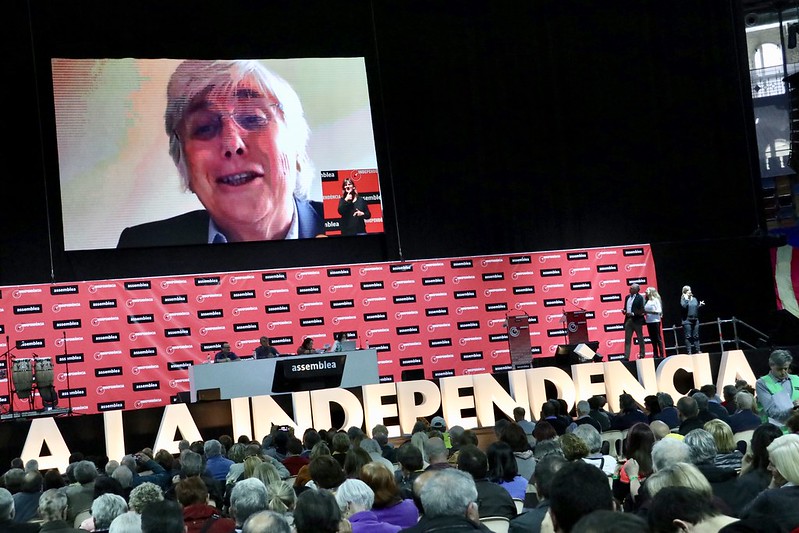 CLARA PONSATI, the former Catalan minister currently exiled in Scotland, will be detained and arrested in November on 7 November, following the issue of a new European Arrest Warrant on a charge of sedition, which the St Andrews professor “utterly refutes”.

Ponsati, who is sought by Spanish authorities over her role in Catalonia’s outlawed 2017 independence referendum, previously faced a European Arrest Warrant on similar charges in 2018. That warrant, along with those against all other exiled members of the Catalan Government, was withdrawn by Spanish judge Pablo Llarenda last summer, after Germany refused to extradite former Catalan President Carles Puigdemont.

However, following the sentencing of nine Catalan pro-independence leaders by the Spanish Supreme Court last month to jail-terms ranging from nine to 13 years, a new warrant has been executed for Ponsati by Spain for the crime of sedition. If extradited to Spain and convicted, Ponsati could face a sentence of up to 15 years.

Catalan media has reported that, in addition to Ponsati, the Spanish Supreme Court has also sent out new arrest warrants for fellow Catalan exiles Toni Comín and Lluís Puig in Belgium.

A Police Scotland spokesperson told press: “We can confirm we are in possession of a European Arrest Warrant for Clara Ponsati.

“We have now been in contact with her solicitor, who is making arrangements for her to hand herself in to police.”

Ponsati will turn herself over to police in Edinburgh on Thursday with her lawyer Aamer Anwar. After her arrest is processed, she will be transferred to Edinburgh Sherriff Court for a hearing, where her legal team will apply for bail. Catalan News has reported that the legal teams of Comin and Puig do not yet know when they will be required to present themselves to Belgian authorities or face local courts.

According to a statement released by Anwar’s office today, Ponsati believes the charge to be part of “a political motivated prosecution” and submits that her extradition would be unjust and incompatible with her human rights.

Her legal team have stated they will oppose the extradition “robustly”, and reiterated that it is Ponsati’s intent to “put on trial the Spanish justice system as well as its politicians who have interfered with due process”.

Ponsati has also once again expressed her gratitude for the support and solidarity of sympathisers across Scotland, Europe and “her beloved Catalonia”.

Abuse of the European Arrest Warrant for political trials can’t be tolerated. Nonsense charges against @ClaraPonsati should be dismissed immediately.

Speaking to BBC News, Ponsati said: “At this point all I can do is keep up the fight, and submit to Scottish justice if I have to.

“This is much greater than myself, I’m just one small grain of sand.”

The sentencing of the Catalan political prisoners in October led to mass-protests throughout Catalonia marked by outbreaks of violence and accusations of abuse against the authorities, which led to the announcement of a wide-ranging inquiry into police conduct by the Catalan Government.

READ MORE: ‘What do Catalans want?’ As protests continue, Clara Ponsati lays out demands for ending conflict in Catalonia

Responding to the sentencing, Ponsati last month demanded amnesty for all Catalan political prisoners and Catalan exiles, the end of the “judicial persecution of the independence movement”, the withdrawal of all “occupation forces”, and a referendum “to validate the creation of an independent Catalan republic”.

The issuing of a fresh European Arrest Warrant for Ponsati was repeatedly predicted by her lawyer Aamer Anwar last month.

Speaking to CommonSpace following the announcement of the Catalan verdict on 14 October, Anwar said: “When one looks at the basis of the decision, it is exactly as we stated when preparing to defend against the extradition of Clara Ponsati. We claimed at that time that, if Clara stood trial, she would not get due process; that the right to a fair trial would be abused; that the Spanish state was carrying out political persecution and acting out of political vengeance.

“Everything that has happened over the course of these several months, and now the conclusion of the judges in Spain, justifies the stand that Clara Ponsati, Puigdemont and others took in resisting the extradition.”

“Clara is resolute and determined to fight and believes that Spain will never be able to crush the spirit of the Catalan People.” Statement from the office Clara Ponsati lawyer Aamer Anwar

Anwar added that, if new European Arrest Warrants for Ponsati and other Catalan exiles were produced, he expected a lengthy legal process, due to the range of evidence and witnesses Ponsati’s legal team intend to bring to bear.

Anwar said: “On this occasion, the case has probably multiplied by ten times in size, in that we now have the evidence of the manner in which Spanish justice operates. We believe, and our client believes, that is an abuse of human rights and due process.

“We will want to cite all those witnesses; not just [former Spanish prime minister Mariano] Rajoy and individuals who acted in his previous regime that raised the warrants – we will also wish to cite, potentially, government ministers who have spoken publicly, and who have overturned the presumption of innocence.

“We will want to cite judges and lawyers in this case. We will also wish to bring in the international observers who monitored the five months of the trial that showed what an abuse of law it was.

“So the case is huge now, potentially, and if the warrants are introduced, I would not expect it to finish any time this year, because of the amount of preparation required.”

Anwar’s office today stated: “Clara is deeply grateful for the support from across Scotland, Europe and her beloved Catalonia.

“Once again she is taking on the might of the Spanish state and Clara is resolute and determined to fight and believes that Spain will never be able to crush the spirit of the Catalan People.”