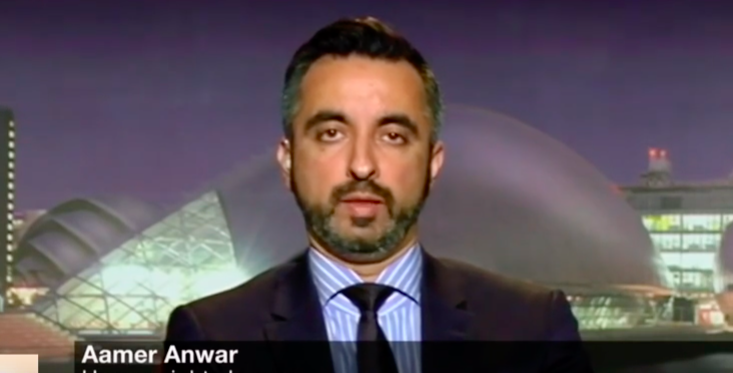 HUMAN Rights lawyer Aamer Anwar has demanded full a public disclosure of how a detainee died at Dungavel Detention Centre.

His comments came after a Chinese national was found dead at the controversial centre on Tuesday morning.

CommonSpace exclusively revealed the man’s body was discovered within the centre in Strathaven, South Lanarkshire.

“I appreciate there is an inquiry and investigation, but that investigation should not remain confidential.” Aamer Anwar

Strathclyde university Rector Anwar claims the Scottish Government should disclose the circumstances of what happened to the man after the Prisons and Police Ombudsman had finished their investigation.

“This detention centre is operating in Scotland. I think the very first thing the first minister and the justice minister should be asking , even though the issue is reserved, is they should be demanding answers from the home secretary into what actually happened.

“It may well be reserved but it happened on Scottish territory and we should not be treated as minions.

“The people deserve and have a right to know what happened, we need to get to the bottom of the circumstances.”

The cause of death was not confirmed by the Home Office when CommonSpace enquired.

A spokesperson told us the death had been reported to Police Scotland.

They said : “We can confirm that a male Chinese national who was detained at Dungavel immigration removal centre was found dead on 19 September 2017. Our thoughts are with his loved ones at this very sad time.

“As is the case with any death in detention, the police have been informed and a full independent investigation will be conducted by the Prisons and Probation Ombudsman.”

A demonstration has been organised for Saturday as an “immediate response” to the death of the detainee.

It will take place outside Dungavel from 12.30 and will be held by protesters opposed to treatment of inmates at the centre.

A spokesperson who helped organise the protest said: “I think it is important to do this outside Dungavel.

“To hear that someone has died there is not common. This is an immediate response to whats happening rather than a longer term protest.

“I am angry about what’s happening there but there is not much we can do about it.”

“But because this happened in detention, I fear no-one will be held accountable.”

“I am angry about whats happening there but there is not much we can do about it.” Dungavel protestor

Unity Centre has also organised a vigil to take place outside the Festival Court, where refugees and asylum seekers attend to “sign in”, on Brand Street an Thursday.

Anwar reiterated the protestors’ sentiment and called for transparency into the death: “The concern I have is that this gets knocked into the long grass, people, politicians and activists don’t get to find out and that’s when rumours start to build up about the reality of what actually went on.

“How exactly is Dungavel Detention Centre expected to learn lessons unless there is a public spotlight? And we’re only going to get that public spotlight if there is some transparency about what went on.

“Whoever operates this operation at Dungavel will know exactly what happened because they would have walked into that detention suit and they would have found the individual.

“They could declare that publicly. If they have nothing to hide, then they should have no fear about disclosing the circumstances about what went on.”

The Scottish Government had not replied by the time of publication.