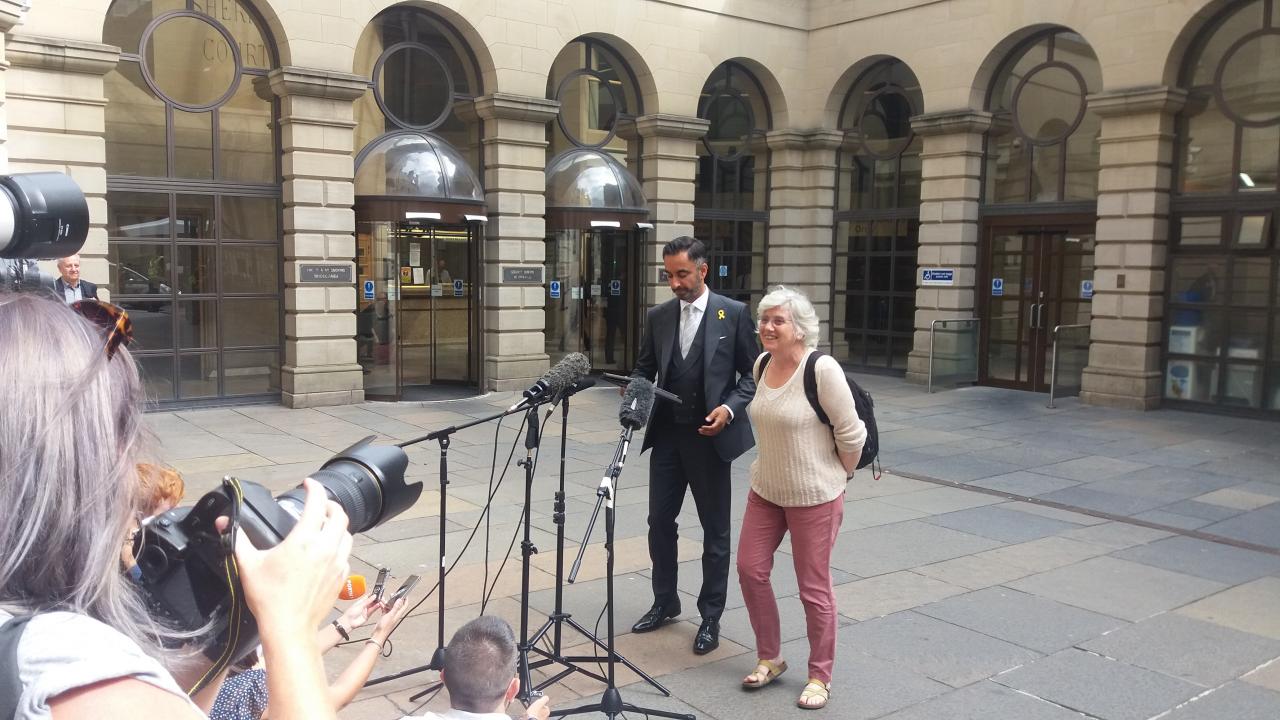 MOLTES GRÀCIES. I bring you solidarity from Scotland and the deepest thanks of Professor Clara Ponsati.

On the 1 October the Spanish state used every tactic possible to bully, blackmail, harass, intimidate and attack.

Yet three years earlier in Scotland we took for granted a  fundamental human right, the right to vote.

So we watched in horror as Spain unleashed unprovoked violence.

General Franco would be so proud of modern Spain acting more like his fascist dictatorship – proud of the actions of Rajoy, the Judges, the thugs in uniform and of course now that so-called socialist  Pedro Sanchez.

To Catalonia I say you have the mandate, the ideas, the dreams, people power and you are on the right side of history.

“To Catalonia I say you have the mandate, the ideas, the dreams, people power and you are on the right side of history.” Aamer Anwar

In August last year I ran from the van as it drove through a sea of humanity which is la Ramblas. 14 dead from 34 countries. And I watched the hypocrites stand in solidarity with the people of Barcelona when terrorists attacked freedom. Yet the same people closed their eyes and ears when Catalonia’s freedoms and democracy came under attack from Spain.

The right to self-determination is a fundamental human right and after more than 300 years of oppression, Spain cannot and will not crush the aspirations of Catalonia to restore its independence.

Three months ago I was so proud when I spoke with Clara Ponsati at the conference of the Scottish National Party as they unanimously voted to support the Catalan struggle.

You have conducted your struggle with dignity, discipline and passion, Your freedom is tied to our freedom.

Spain labels you as terrorists but whoever stands for justice and peacefully fights for freedom cannot be called a terrorist.

Your struggle is a just cause; Independence is your cause and you do not walk alone.

There is no doubt in my mind that when the Spanish Government talked of decapitating the Catalan Government it wanted to silence a movement and a people.

They will always fail.

“If Sanchez is truly interested in a political solution then free all political prisoners without condition and allow Clara Ponsati and all political exiles to return home.” Aamer Anwar

Prime Minister Pedro Sanchez said he wants a political solution rather than a judicial solution. I would ask Sanchez if a gangster walks into a house, takes the children hostage, holds a gun to their heads and then asks their father to negotiate with the gangster – is that a peaceful resolution or is that blackmail? Is that negotiation or is it terrorism?

If Sanchez is truly interested in a political solution then free all political prisoners without condition and allow Clara Ponsati and all political exiles to return home.

You, the Catalan people, have built a movement for independence which has always had the principles of internationalism, justice, equality and freedom at its heart.

Silence is not an option for those on the side of justice.

The arrest warrant accused Clara Ponsati of orchestrating violence at over 2000 polling booths, but where are the warrants for the Spanish police officers for their ‘alleged’ violence?

Of course we know from the LA MANADA and ALTSASU KOAK ASKE that Spanish Justice is full of double standards.

But justice is right and not a privilege. Human rights form the foundation of any civilised democracy, but with over half of the Catalan government in exile or in custody, Spain is acting more like a dictatorship.

Across Europe, Spain stands accused of politically motivated prosecutions driven by vengeance and a total contempt and lack of respect for international law and human rights.

For those Fascists in Spain who dream of the rebirth of Francoism, our message is simple – ‘No Passaran’.

“Resist and carry on the fight and we shall overcome: prisoners and exiles will be free, and Catalonia will be republic!” Professor Clara Ponsati

Catalonia never be scared to raise your voice for the truth,  you will one day be free.

To conclude my friends, a message from Clara Ponsati:

“Have no fear, because together we are so much stronger than each of us feels!

Resist and carry on the fight and we shall overcome: prisoners and exiles will be free, and Catalonia will be republic!”