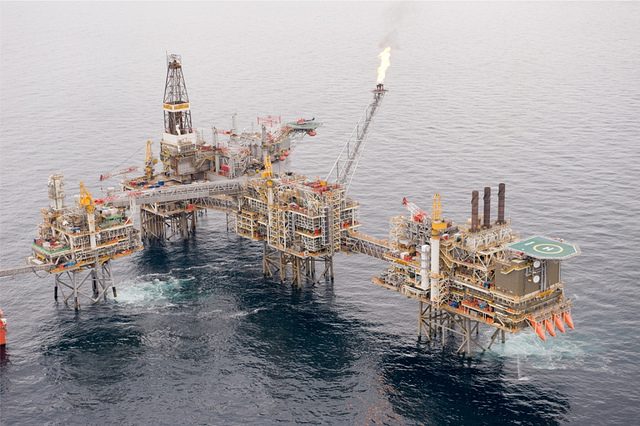 A NEW REPORT from the pro-independence think tank Options for Scotland has proposed that North Sea oil and gas rigs should be cleaned up but not decommissioned, and that the money saved should be reinvested in green energy.

Written by Tom Baxter, a senior lecturer in chemical engineering at Aberdeen University, the report ‘Decommissioning – the sustainability challenge’ argues that currently planned decommissioning work in the North Sea sector would not be worth the estimated £20-30bn cost taxpayers will face between now and the 2050s, and that decommissioning will deliver far fewer jobs to areas like Dundee than originally envisaged.

The report goes on to propose that leaving existing rigs extant following cleaning operations and reinvesting subsequent savings of roughly £15bn in renewables would have far greater environmental worth and produce more jobs.

Speaking to Energy Voice, the energy sector website at which he is a columnist, Baxter said: “Oil and gas companies undertake comparative societal, environment and economic assessments to justify their decommissioning approach. These are set within the framework of options from full removal to leave in place.

“The taxpayer will fund around half of the costs, around £20-£30billion depending upon the final bill − as much as £1,000 per taxpayer.” Author of ‘Decommissioning – the sustainability challenge’ Tom Baxter

“Although detailed assessments are made, crucially, they miss the key role of the taxpayer. The taxpayer will fund around half of the costs, around £20-£30bn depending upon the final bill − as much as £1,000 per taxpayer.

“This is a huge sum of money and we should be asking the government to show us that decommissioning plans are the best solution for taxpayers from a societal, environment and economic position, taking into account what could be done with the taxpayers’ money.

“Exploring what else could be done with taxpayers’ money to serve society is not undertaken by the oil and gas companies, leaving the taxpayer short changed.

“The motivation for offshore architecture removal is environmental. If, as many believe, the most pressing issue of our time is global warming then it may be much more beneficial for the environment, society and the economy if the architecture was left clean and in place and the money saved directed into green energy and emissions reduction. This is the basis for this exposition.”

“I am urging both the Scottish and UK Governments to review their strategy in the light of Tom Baxter’s paper.” SNP MSP Alex Neil

Alex Neil, SNP MSP for Airdrie and Shotts and chair of Options for Scotland, told CommonSpace: “I am urging both the Scottish and UK Governments to review their strategy in the light of Tom Baxter’s paper. He argues very strongly that his alternative approach is better both economically and environmentally.

“I believe governments should always listen to proposed new ways of doing things. It is time to think outside the box.”

Neil elaborated while speaking at the report’s launch at Holyrood on 10 January: “The public purse would save about £15bn on decommissioning costs that are currently planned through tax liabilities and expenditure by the UK Government.

“That £15bn in times when money is really tight could be used to re-invest in renewable energy, or indeed for anything else for that matter.

“There would be no environmental costs, in fact quite the opposite. If that money was used to re-invest in renewable energy then there would be a net gain to the environment.”

Neil continued: “The point is there isn’t the prospect of an onshore, permanent jobs bonanza, and that’s what we’ve been led to believe up until now.

“We need to get real here and look at a different way of doing things.”

“It’s simply wrong to say we have to choose between investing in renewables and decommissioning North Sea oil and gas platforms and pipelines. We can and should do both.” Scottish Green Energy and Environment spokesperson Mark Ruskell

However, the new report has also attracted criticism from those who dispute the merits of its environmental logic. Mark Ruskell MSP, Energy and Environment spokesperson for the Scottish Greens, told CommonSpace in response to the report: “Calls to rip up international commitments to protect our seas are misguided. Ecological evidence on the benefits of reef creation using hard structures in the North Sea is weak.

“It’s simply wrong to say we have to choose between investing in renewables and decommissioning North Sea oil and gas platforms and pipelines. We can and should do both.

Lyndsey Dodds, head of UK and EU Marine Policy for WWF UK, also disputed the report’s assertation that North Sea rigs could be left in place with no negative environmental consequence, saying: “Given the very generous tax-breaks and incentives the oil industry has received over the years the idea that it might be allowed to wriggle out of its internationally-agreed obligations to clean up its mess is unacceptable.”

Responding to the report, a spokesperson for the UK Department for Business, Energy and Industrial Strategy said: “Offshore oil and gas operators must decommission installations and pipelines at the end of a field’s economic life.

“This is done in accordance with UK and international obligations and is delivered in a safe, efficient and cost-effective manner for taxpayers, while minimising the risk to the environment and other users of the sea.”

CommonSpace sought comment from the SNP’s Westminster spokespersons on energy, but received no response at the time of publication.