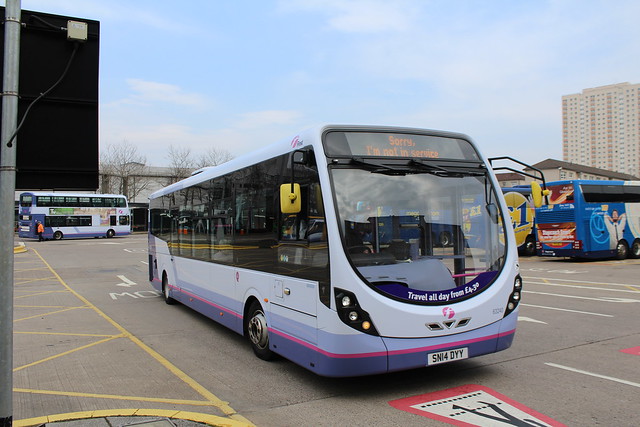 Glasgow City Council have rejected calls to bid for First Bus services, while Aberdeen and Falkirk councils have started talks with the company

Falkirk and Aberdeen Councils have stated their willingness to explore taking over First Bus services, while Glasgow City Council have outright rejected consideration of an attempt to take them into public ownership.

FirstGroup announced last month that it will be selling off First Bus as part of a downscaling of its UK based operations, and Aberdeen City councillors yesterday [25 June] voted unanimously to investigate how they might bid for the local branch of First Bus.

Talks have already been conducted between the council and the firm, though councillors have stressed that these are still in very early stages. Jenny Laing, co-leader of Aberdeen City Council who put forward yesterday’s emergency motion, told CommonSpace that given indications, First may be willing to sell bus services, the council was noting an interest in examining how to potentially make a bid.

A campaign by transport group Get Glasgow Moving asking Glasgow City Council to “bring Glasgow’s buses back into public ownership” has gathered over 2,800 signatures since it was launched a week ago, but the council have rejected calls to look into purchasing First bus services.

A spokesman for the council said: “We are currently looking at all reasonable and practical options for improving bus services in Glasgow.

“We fully recognise that the bus industry faces a highly challenging future and there is an onus on all stakeholders to work together to find a way forward.

“The new Transport Bill sets out an option for local authorities to develop a partnership with bus providers to ensure positive collaboration in respect of what remains an essential element of the transport system.”

He added: “The reality is that a significant change in legislation and also substantial resources would be required for us to buy a bus company, neither of which are in place.”

Under the Transport Bill currently working its way through Holyrood, local authorities will be able to set up their own bus services including “arm’s length” companies similar to Edinburgh’s Lothian Buses, the only bus service in Scotland to have remained in public ownership.

Yet what this means for the purchase of existing firms is unclear, and the legality of a local council taking into public ownership a commerical bus service is disputed. Glasgow City Council considers purchasing First Bus services in the city to be “illegal” as legislation stands, according to a spokesman.

However, Falkirk City Council’s Spokesperson for the Environment, Councillor Paul Garner, told CommonSpace: “We are working with First Bus in relation to their announcement and at this stage no options are off the table.”

And in Aberdeen, city officers will be examining how the council may be able to tender a bid for services, if they decide to do so. Co-leader Laing has stressed that this would require the Transport Bill and amendments relating to local council bus provision to be passed. The Transport Bill is currently at the Stage 2 process of passage through the Scottish Parliament, but the key amendments have been agreed.

FirstGroup’s planned sell-off is due to a shift towards focusing on the US, where it generates 60 per cent of its operating profits. The company has said it will consider all options for offloading the bus service, including potentially selling it in whole or in parts.

Mick Cash, General Secretary of RMT, which includes members working on the buses, stated: “It’s clear that many local authorities are waking up to the fact that under privatisation and deregulation their bus services have been hacked to bits.

“RMT supports any move to end the scandal of Britain’s buses and we welcome any shift that speeds up a return to public ownership and control. “

There has been a significant decline in bus passenger numbers in recent years, due in part to increased car use and congestion. 80 per cent of local bus services in Scotland are commercially run, with rural areas more heavily subsidised.

Gavin Thomson, Air Pollution Campaigner at Friends of the Earth Scotland, commented: “Amendments that were recently added to the Transport Bill give councils powers to own and run their own buses. Private bus operators have failed in many areas of the country, leaving us with declining bus passenger numbers, ever-increasing fares, and a fragmented network that serves company greed rather than community needs. These new powers allow us to re-imagine what our public transport should look like.

“It is great to see these campaigns spring up, as people realise the significance of what’s at stake. By increasing bus use we can cut air pollution and congestion, reduce climate emissions, and make our towns and cities better places to spend time. We hope Councils will look carefully at any opportunities that arise to start providing accountable, affordable bus services which boost passenger numbers and take cars off the road.“

If the Transport Bill is passed at Holyrood, local councils may be able to go beyond subsidising services to run their own bus services, potentially in competition with commercial operators.