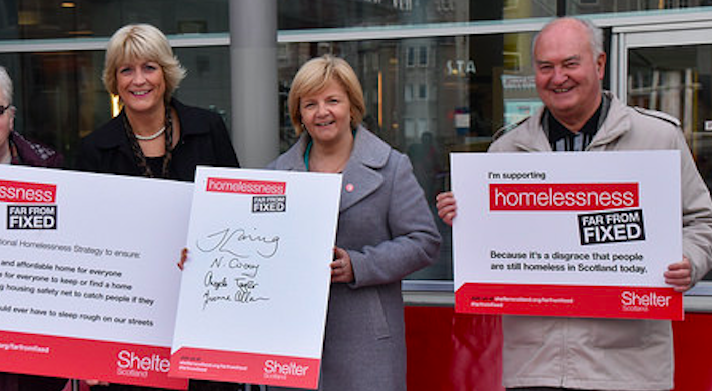 Last of the four breakaway councils votes to rejoin Cosla

Aberdeen is the last of the rebel authorities to return to Cosla, after deciding to move away from sole responsibility to shared leadership when administration leaders Councillor Jenny Laing, (pictured centre) Labour, and Councillor Douglas Lumsden, Scottish Conservatives, were voted in by members.

“There is no doubt in my opinion that Scottish local government has more chance of success if Cosla has full 32 council membership.” Cosla

Speaking to Scottish Housing News, Councillor Laing said: “I look forward to working with Councillor Lumsden as we lead Aberdeen City Council together, with ambitious plans for the months and years ahead.”

Councillor Lumsden added: “I’m pleased the steps required to introduce co-leadership have been approved and am proud to serve as co-leader of Aberdeen City Council.”

The move by Aberdeen council means all 32 Scottish Local Authorities are again members of Cosla.

Councillors have agreed ACC will rejoin the Convention of Scottish Local Authorities (COSLA) after a two year absence.

COSLA President Councillor Alison Evison said: “The first thing to say is that I am absolutely delighted with the decision taken by Aberdeen City Council today. It is my absolute pleasure to welcome them back into the organisation.

“There is no doubt in my opinion that Scottish Local Government has more chance of success if Cosla has full 32 council membership. That was always my aim and this has now been achieved with the decision taken by Aberdeen City Council this afternoon.”

The four Labour-led breakaway councils walked out of Cosla after claiming they were not receiving proper finding from the SNP-led Scottish Government.

Former Glasgow City Council leader Gordon Matheson claimed in March 2015 that Glasgow was missing £190m from its budget following the Commonwealth Games being held in the city.

But after the local authority elections this year, Glasgow led by SNP councillor Susan Aitken, returned to Cosla in May on the first day of office following the SNP’s success.

Speaking to the Herald in May, Aitken said: “This is important because Glasgow needs to be round the table. As imperfect and in need of reform as Cosla is we can’t back away from where decisions on local government are made and then make demands.

“Glasgow left for party political posturing. It’s partnership group achieved nothing and delivered nothing. As a council and a city, we need to be where the decisions are made and this was an easy thing to fix. We’ve said from the off we’d work with others even where there’s disagreement and Cosla is one of those places where we’ll work in partnership.”