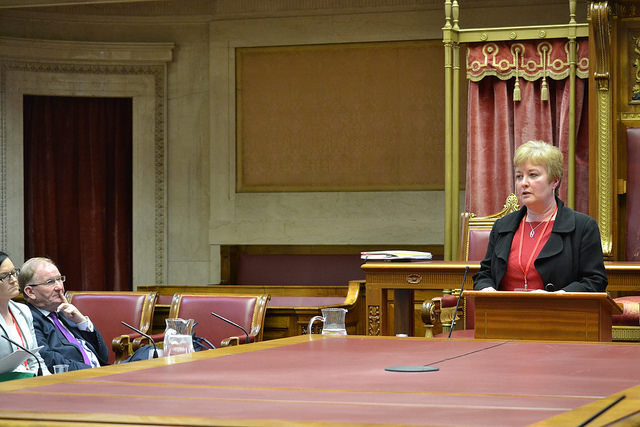 Ash Burnett: “Rhoda Grant will have EU citizens within her constituency – she owes an apology to them. She needs to recognise the error of judgement she has made.”

EU CITIZENS have expressed their anger at comments from Labour MSP Rhoda Grant, who suggested that protecting their political rights in Scotland post-Brexit was a “side issue” and a “tactic” used by the SNP to distract from economic issues.

Grant was responding on the BBC to the Scottish Government’s Programme for Government announced by First Minister Nicola Sturgeon on Tuesday [4 September], which included the Electoral Franchise Bill, which would extend the franchise for Scottish Parliament and local government elections to ensure EU citizens living in Scotland still had the right to vote and stand in elections post-Brexit.

Asked about the Bill, Grant, who is an MSP for the Highlands and Islands region, said: “This is one of those tactics that actually pulls a lot of media attention away from the fact that this is doing little or nothing for the people of Scotland.”

Asked about whether EU citizens would feel insulted by that, Grant responded: “Those very same people would want their wealth and their stability at home much more than they would promises about votes.”

Grant went on to confirm that she did think EU citizens should continue to have the same rights as they did prior to Brexit, but added: “This is one of those side issues that’s going to pull attention away from what should be happening, and that is about the economy of this country, and giving people food and a roof over their heads, and that´s what´s really important.”

Rhoda Grant suggests that guaranteeing voting rights is a ‘typical SNP tactic’.
Fancy getting out of that gutter anytime @scottishlabour? pic.twitter.com/D5jTTSS4Rb

Itxaso Moreno, an actor based in Glasgow who has lived in Scotland for 20 years, said she found Grant’s remarks “patronising”.

“It suggests our political voice doesn’t matter,” she said. “That’s exactly the message EU citizens have had from Westminster before and since Brexit. This is the same rhetoric.”

EU citizens were not allowed to vote in the EU referendum, and since the Brexit vote have been left in limbo for more than two years about their future rights within the UK, which the UK Government has refused to make a unilateral commitment to before negotiations on the UK´s future relationship with the EU is concluded. 130,000 EU nationals have emigrated from the UK over the last recorded year, the highest number in a decade.

Moreno said that shortly after the Brexit vote she received a letter from the First Minister making it clear that she was still welcome in Scotland.

“That was important to me and I’ve not heard that message from any of the other big parties, they don´t seem to show any care,” Moreno told CommonSpace. “There seems to be a total disregard in UK politics for migrants political voices.

“The Tories are keeping us in the dark about what our rights are going to be after Brexit, and by us I mean everyone – because this affects friends, partners, family of EU citizens as well.”

On Grant´s emphasis on jobs and wealth rather than rights, Moreno said it was a “empty comparison”.

“She [Grant] was asked a question about EU citizens voting rights – why contrast that with jobs and food? Of course we want decent jobs, but that’s not separate from which parties we can vote for. I’ve been hearing since I came to this country lots of talk from Labour about jobs and food on the table – not so much action.”

“In the EU referendum EU nationals didn’t have voting rights, so this is not a small issue. And it is an issue in terms of our jobs and economic situation, because democracy matters to that.”

Burnett said EU citizens “feel threatened” after Brexit when it comes to their rights, and that for many it is “not just an issue of voting but also of standing, as many EU citizens are councillors in Scotland who could be told that you can’t be an elected representative in the future.”

Burnett said many EU citizens had been reassured by First Minister Nicola Sturgeon’s words, to the extent that it has convinced many of them “to stick it out here a bit longer”.

“Because this is our home,” she explained. “To leave, we wouldn’t be going home, for many we would be going to a country we haven’t lived in for up to 40 years.  I think our civic and political rights are for many of us the last vestige of equality that we have – to have that taken away would feel like the final nail in the coffin, because what democracy represents is bigger than voting – it’s about being able to feel like a normal participant in your community.”

The Electoral Franchise Bill is also expected to look at extending the franchise to those living in Scotland who do not currently have citizenship – asylum seekers and refugees – and Burnett said she and other EU citizens she knows were delighted by this development.

“This is what democracy is – you have democratic rights here no matter who you are or where you come from,” she said.

Burnett called on Grant to apologise for her remarks.

“Rhoda Grant will have EU citizens within her constituency – she owes an apology to them, she said. “She needs to recognise the error of judgement she has made. To suggest that political rights are not as important to EU citizens as economic issues: imagine if a politician said that about any other group; poor people, black people, Jewish people – there would be an outcry. We should all be treated equally in Scotland no matter where we come from.”

Rory Scothorne, a member of the Momentum group in Labour in Scotland, appeared taken aback by Grant’s remarks, saying on Twitter in response: “Who is writing these lines? Why are they still in a job?”