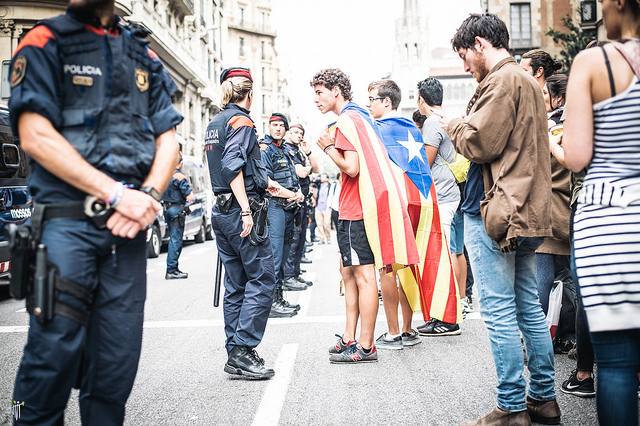 OVER 80 ACADEMICS from universities across the UK and Ireland have called on the UK Government and the UK’s devolved legislatures to apply pressure on the Spanish Government to cease political repression in Catalonia.

In an open letter published in the Herald newspaper, the professors and university staff express how “appalled” they are by the violence and authoritarianism of the Spanish authorities since Catalonia’s controversial 1 October independence referendum.

“We are academics working in the fields of law, human rights, politics, sociology, history and related subjects in the UK and Ireland,” the letter reads.

“We are appalled at the lack of response by the international community to Spain’s use of violence and human rights violations.” Open letter from UK academics on Catalonia

“We are appalled at the lack of response by the international community to Spain’s use of violence and human rights violations.

“As the international NGO Human Rights Watch has noted, Spanish police engaged in excessive force and violence against demonstrators.

“We also write to express our outrage at the arrest of two activists Jordi Cuixart and Jordi Sànchez of the Catalan National Assembly and Omnium Cultural respectively. We are profoundly worried that this is the first step in a major escalation of repression in Catalonia.”

“The common position is there are serious repressions of human rights, especially when you see in 21st century Europe two people jailed for sedition.” Professor David Whyte

The collective academics’ concrete demands are for all governments across the UK to make the following “unequivocal” demands: “That Spain immediately withdraws the Guardia Civil, the Spanish National Police and other paramilitary forces in Catalonia”, and “That Spain immediately releases all political prisoners, including Jordi Cuixart and Jordi Sànchez and does not use imprisonment against those who organised activities in connection with the referendum.”

In articulating the seriousness of their concern, the academics describe the level of political repression in Catalonia at the present moment as “of a severity and arbitrary character not expressed since the Franco dictatorship.”

The letter was circulated amongst British academia by Professor David Whyte of the University of Liverpool, who told the Herald that “dark forces” were at work in Spain.

Describing the letter’s signatories, Whyte said: “We come from a very wide range of subject backgrounds. But the common position is there are serious repressions of human rights, especially when you see in 21st century Europe two people jailed for sedition simply for organising a referendum.