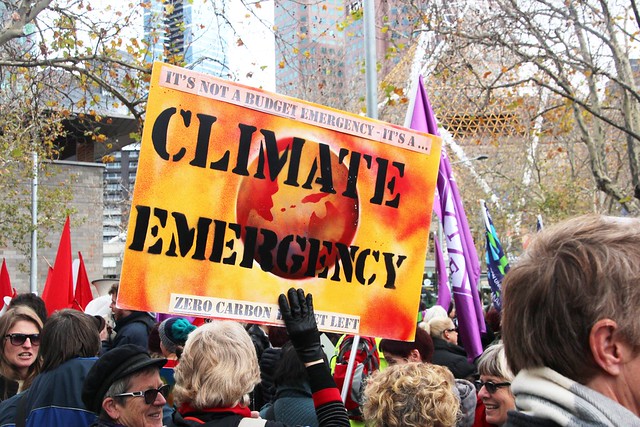 Scottish Greens: “Actions speak louder than words, cutting aviation tax and lobbying for huge tax breaks for oil and gas exploration is not the climate leadership the world needs.”

Sturgeon made the declaration during her speech to members at the SNP’s spring conference in Edinburgh on Sunday [28 April], in which the First Minister said that she had been asked by participants in the youth climate strikes, who she met a few weeks ago, to do so.

“They want governments around the world to declare a climate emergency. They say that’s what the science tells us. And they are right,” Sturgeon said.

“So today, as First Minister of Scotland, I am declaring that there is a climate emergency. And Scotland will live up to our responsibility to tackle it.”

The call for a Climate Emergency has been made by climate activists since the Intergovernmental Panel on Climate Change’s (IPCC) stark report on 8 October, which warned that global emission levels would have to be cut by almost half by 2030, and entirely by 2050, to keep climate change to a 1.5C rise above pre-industrial levels. Climate change will reach the catastrophic stage, where feedback effects will render further temperature rises unstoppable, above the 1.5C level.

Sturgeon’s announcement was greeted warmly by Greta Thunberg, 16 year-old Swedish activist who kick-started the youth climate strikes and has become the global face of the movement, who tweeted out the news.

”So today, as first minister of Scotland, I am declaring that there is a climate emergency.”#ClimateBreakdown https://t.co/S0J6GRUwB3

Sturgeon said that she would respond positively to whatever a report forthcoming this week by the Committee for Climate Change on Scotland’s ability to credibly reduce emissions comes up with.

“If that advice says we can go further or go faster, we will do so,” she said.

The Scottish Government’s current target in the draft Climate Bill is to reduce emissions by 90 per cent by 2050.

Commenting on Sturgeon’s conference announcement, Friends of the Earth Scotland director Richard Dixon said: “The declaration of a Climate Emergency is very welcome.  People are dying and livelihoods are being destroyed, and the world is heading for catastrophe if we do not get a grip on climate emissions.  Emergency is exactly the right word.

“In an emergency you need to take urgent action on fixing the problem, to get together the people who make a difference and to stop doing the things that make the crisis worse.

“The Scottish Government have yet to spell out how they will behave differently because they now acknowledge that there is a Climate Emergency underway.  With new advice or targets coming this week, agreement to create a Green New Deal for Scotland last week and the potential of the new investment bank, there are plenty of things coming into place which will help us address this emergency.

“But we also need to stop doing the things which are ploughing us ever further into crisis.  That means an end to new oil exploration and a plan to replace North Sea oil jobs with clean energy jobs, it means investment to make our energy-wasting homes more efficient and it means spending transport money on walking, cycling and public transport instead of things which encourage people to drive even more.”

The SNP conference also saw a motion passed which welcomed the wave of direct action over climate change seen in recent months from the youth climate strikes and the Extinction Rebellion protests, and Extinction Rebellion Scotland activist and photographer Lauren McGlynn said that Sturgeon’s announcement was “proof” that their strategy was working.

She said: ”We are cautiously optimistic upon hearing the news that the First Minister has met our demand that the Government tell the truth about the climate crises by declaring a Climate Emergency. We take the First Minister’s announcement as proof that direct action works, that all of our labour, organising, as well as the arrests of many of our rebels, have been successful in sounding the alarm about the crises that we all face. It demonstrates that ordinary citizens do have the power to shape the direction of our future.

“We are now watching to see if the government will act as if this truth that we are in a climate and ecological emergency is real. We demand that the Government enact legally binding policy measures to reduce carbon emissions to net zero by 2025, including by replacing a system based on accelerating consumption with one based on ensuring the wellbeing of all.

“We have been further encouraged by the First Minister’s plan for the creation of a Scottish Citizens’ Assembly, and we demand that the Citizens’ Assembly be given a mandate to oversee the necessary changes, as part of creating a democracy fit for purpose and a more just society.”

The Scottish Greens sought to get the Scottish Parliament to back a climate emergency in March, but the motion was rejected by all of the other Holyrood parties, with only the six Green MSPs backing it.

“Following the First Minister’s declaration at her party conference on Sunday, I had hoped that we may be seeing a welcome change of direction rather than just another press release.

“Yet, only a few hours later the Cabinet Secretary for Government Business Mike Russell appeared on the BBC Scotland Debate Night programme and made the case for extracting evermore oil and gas.

“Actions speak louder than words, cutting aviation tax and lobbying for huge tax breaks for oil and gas exploration is not the climate leadership the world needs.

“Declaring a climate emergency is about more than posing for pictures with climate strikers, it’s about ditching policies that are destroying the planet and investing in the jobs and technologies of tomorrow, today.”

On the BBC Scotland Debate Night programme, Director of the Common Weal think-tank Robin McAlpine responded to Sturgeon’s declaration by saying a climate emergency “is not a branding opportunity”.

“We must act and act now, or this is not going to work,” he added. “It’s not targets, it’s not aspirations, it’s not statements, we need in the next year a serious action plan, and a serious plan for how to fund it, and if we do not get that, we are going to be sitting here in twelve years saying ‘what the hell were we doing?’”

Also commenting, Gina Hanrahan, Head of Policy at WWF Scotland, said: “The First Minister is absolutely right to declare that we are facing a climate emergency. Climate change is already everywhere, in disrupted weather affecting farmers here in Scotland, in melting sea ice in the Arctic hitting nature, and in extreme weather such as hurricanes, wildfires and heatwaves destroying lives and livelihoods around the world.

“Politicians from across the spectrum need to work together to lead the rapid and large-scale emergency response that we urgently require. A new expert report later this week is expected to advise a deadline year for ending Scotland’s contribution to climate change. This will need political support for ambitious new targets and accelerated actions to make homes warmer and renewable powered, to support sustainable farming, and to help get polluting fossil fuel vehicles off the roads.”