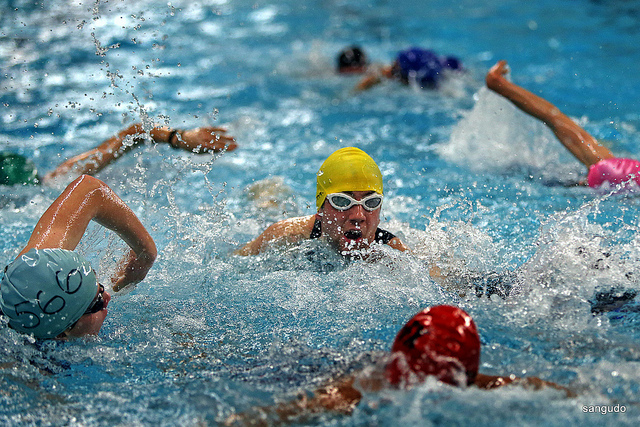 NOW IN its sixth year, LGBTI charity Leap Sports’ ‘Festival Fortnight’, running 1-17 June, will play host to a varied selection of events and activities across Scotland, with the aim of boosting visibility and participation of lesbian, gay, bisexual, transgender and intersex (LGBTI) people in Scottish sport.

Originally conceived in 2013 as a way to get LGBTI-specific sports groups to work together to attract members, the organisers quickly realised that there was a need to reach out more broadly to the Scottish sports sector, and this year’s programme is the biggest yet with 73 events including sports taster sessions, outings and competitions, alongside workshops, panel discussions and cultural events.

From boxing to basketball, football to waterskiing, roller derby to laser tag, and hill walking to ‘croquet on the lawn’ (complete with tea and cake), there is bound to be something for all ages and abilities.

Speaking to CommonSpace, project officer at Leap Sports Sirri Topping explained why an LGBTI-specific sports festival is necessary: “While we’re seeing quite a lot of strides forward in other areas of society, sport continues to be a thorn in our side in terms of LGBTI people in society.

“Sport continues to be quite homophobic and transphobic, and despite some improvements, a lot of LGBTI people don’t feel included in sport.

“That’s why this festival is so important – it provides opportunities to try out sports to get a taster of how you can get involved and how great sport is, it overcomes barriers and it acts as a pathway into mainstream sports clubs.”

Research by Stonewall Scotland in 2016 found that 60 per cent of sports fans in Scotland had witnessed “language or behaviour which was offensive to LGBT people in a sport setting” in the last five years and that 68 per cent said more should be done to make LGBT people feel accepted in sport.

In 2017, Stonewall Scotland found that one in seven LGBT young people said they had experienced bullying in school sport lessons, a figure which rose to one in three for trans young people.

Topping said that, as well as making LGBTI people aware of the opportunities and benefits of participation, the festival aims to challenge sports bodies to break down the barriers facing LGBTI people in their sports.

“Education is a big part of the issue and that’s another thing the festival fortnight tries to do, to make sure stakeholders within sport are more aware of what the barriers are and strive towards overcoming those,” she said.

“For example, the cycling taster will give Scottish Cycling the opportunity to consult with LGBTI people and inform best practice going forward, and Scottish Swimming will be attending our discussion panel on TIQ+ [trans, intersex and queer] people in swimming.”

The discussion panel will precede the Seahorses trans and non-binary swimming gala, and will be informed by Leap Sports’ 2015 research into the experiences of trans people of swimming in Glasgow, which found that many trans people put swimming on hold or stopped altogether after they started transitioning.

Topping explained that this was among a number of sports in which trans people face particular barriers to participation. “The LGBTI movement in sport is improving at a bigger rate for LGB people – it’s becoming a little less homophobic.

“But for trans people it’s hard, for example, to have to prove what gender you are and to always worry that people are looking at you,” she said.

The swimming gala, she said, is a good example of how some sports group are creating a “safe space” which allows people the confidence to participate. “We always get asked why LGBTI specific sports groups are needed – ‘why do you have to segregate yourselves?’

“But we also know that this can provide a great support network and offer a pathway into regular participation.”

Topping stressed that the festival wasn’t “all doom and gloom” and that there was a clear theme of celebration within it too. “We know there are plenty of LGBTI people who are participating in sport, so we want to celebrate their participation and how they are excelling in those sports,” she said.

The full programme for the Festival Fortnight is available here.