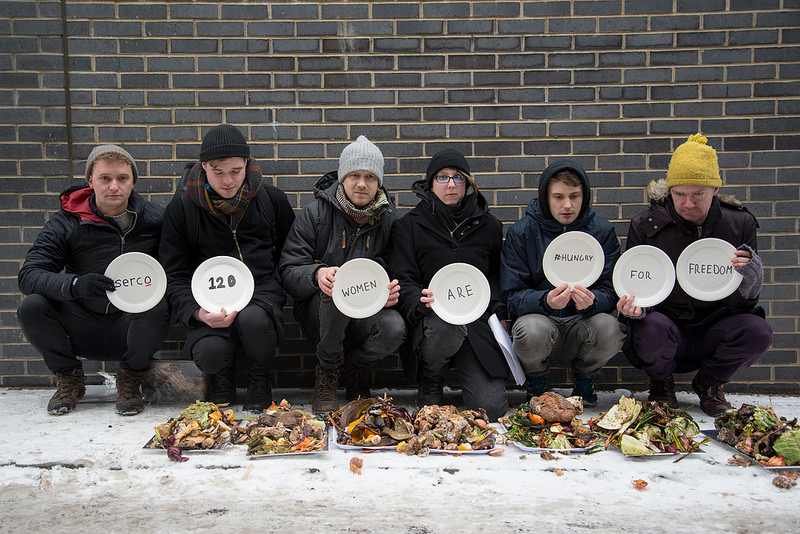 Supporting women at Yarls Wood on hunger strike, activists have blockaded the headquarters of security firm Serco with rotten food

ACTIVISTS from the group Lesbians and Gays Support the Migrants have blockaded the HQ of security firm Serco with rotten food, supporting women in the immigration centre who are entering their second week of hunger strike against their treatment.

Operated by security firm Serco, the infamous Yarls Wood is an “immigration detention centre” which accommodates foreign nationals prior to their deportation from the UK.

Around 120 women have been refusing food since last week over what they describe as “inhumane” conditions at the detention complex.

A “damning” report published in 2015 by Nick Hardwick, chief inspector of prisons, labelled the centre a “place of national concern”.

Lesbians and Gays Support the Migrants say both the UK Government and Serco have refused to listen to the strikers demands: “Serco are trying to ignore the hunger strike happening in Yarl’s Wood detention centre which they’re running.”

Sam Bjorn from the group continued: “The women in Yarl’s Wood face intimidation from guards and sexual harassment and companies like Serco are profiting from this horrendous treatment of people in detention centres.

“The UK immigration system is rotten to its core and it’s the brave women of Yarl’s Wood that are suffering the consequences. As Serco continue to ignore the hunger strike we wanted to bring the rotting food to their doorstep. We support their brave fight against this brutal system.”

“The UK immigration system is rotten to its core and it’s the brave women of Yarl’s Wood that are suffering.” Sam Bjorn, Lesbians and Gays Support the Migrants

Over 400 people are detained at Yarls Wood awaiting a decision on their deportation, most of whom are women. They include survivors of rape, torture and human trafficking.

The UK does not put a time limit on how long detainees can be held, which is the central demand from the women in Yarls Wood.

Lesbians and Gays support the migrants said many detainees are held for months or years with no release date.

A Home Office spokesperson denied delayed detention: “When people are detained, it is for the minimum time possible and detention is reviewed on a regular basis.

“The women of Yarl’s Wood are desperate and we owe them a duty of care.” Shadow home secretary Diane Abbott

“Any decision to maintain detention is made on a case by case basis but their welfare remains of the utmost importance throughout.”

The spokesperson added that any detainees on hunger strike would be monitored by on-site health care professionals.

After a rare visit to the site last week, Labour’s shadow home secretary Diane Abbott said in parliament on Monday (26 February) that she met women who were “victims of trafficking and sexual abuse,” adding: “The women of Yarl’s Wood are desperate and we owe them a duty of care.”

Picture courtesy of Lesbians and Gays Support the Strikers